Last year  our route to winter moorings in Burnley were interrupted  by an enforced diversion we had to make to avoid the breaches near Anderton  and Middlewich. 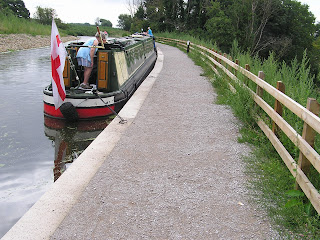 The larger of the two breaches, at Dutton, north of Anderton,  cost more than £2m to repair and has been open for a couple of months.  When we saw the finished repair we decided to moor there for the night. 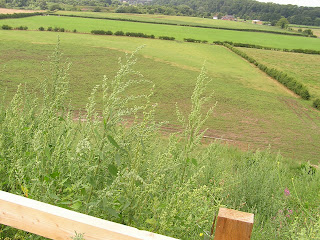 The impact of the breach can still be seen in the field below the canal.


We soon revoked the mooring decision as my left leg, which had been bitten by an insect of some kind two nights before was now too big to fit in my sandals.
So we cast off and made for civilization.

Getting medical treatment when you are away from your own doctor can be difficult and on this occasion it involved four bus rides, two hospitals and 5 hours.
Four days later, my leg is responding to treatment and I look less like a two legged elephant. 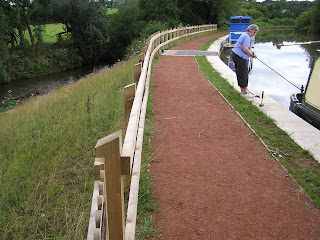 As we approached Middlewich we saw ahead the site of the breach at Croxton and pulled in to moor.  Here, however C&RT has not provided any mooring rings so we imitated their boat which was already moored and put in pins.


For the past week or two we have been revising our planned route as, once again, there are major obstacles appearing.  Lock 20 of the Wolverhampton flight collapsed and is taking longer to repair than expected.  The embankment near Curdworth on the Birmingham & Fazeley canal is leaking and requires attention.  There is only one other viable route into Birmingham open to us and we have decided to by-pass Birmingham this year.
The most serious obstacle, however, is lock 12 on the Aylesbury Arm.  This collapsed four months ago and the completion date for the repairs has been postponed from August to the end of October. This is when we intend to go down the arm for winter moorings in the new Aylesbury Canal Basin at Circus Field.
We just live in hope as there is no way round this obstacle.
Posted by Peter at 06:30