Bath Time - 2
Back in July we spent a very enjoyable and exciting week in the centre of Manchester. (see blog entries On the P**s and others). We moored near the Museum of Science and Industry which was very convenient as we like to use shore facilities as often as possible to reduce the frequency of emptying our own toilet. 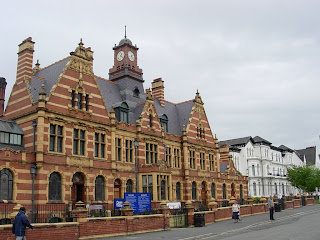 Whilst there we had to visit the Victoria Baths
in Sale/Hathersage. You may recall they were the winners of the BBC Restoration programme. They were designed by Henry Price and built in 1903-6. The original estimate of £57,000 was rejected as too expensive and plans were modified resulting in a revised figure of £39,000. Final cost was over £59,000. So nothing has changed in the world of civil engineering ,then.
Reflecting the values of the Victorian age which had just passed, there were three pools each with its own entrance from the street.

The size and quality of facilities reflected the status of these three classes, too. Part of the reason for the overspend was the decision to bore a well and install filters rather than rely on the sometimes murky mains water supply. 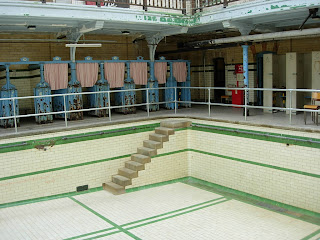 This clean water was pumped into the First Class Males' pool from where it flowed through the Second Class Males' and finally on to the Women's where it may have lost some of its advantages over the mains supply. 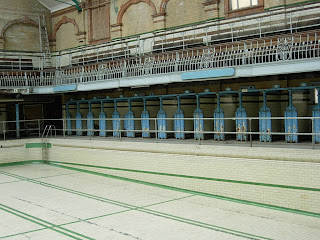 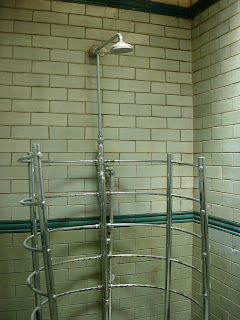 These were no simple swimming baths: the building also housed 64 wash baths, a Turkish Bath, a Russian Bath, clubhouse, boilers, calorifiers and a four-bedroom flat for the Superintendent of Baths. 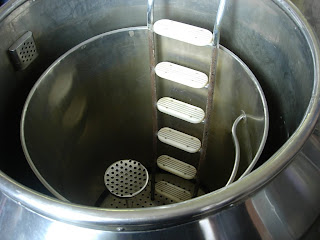 In 1952 Victoria Baths installed the first Aeratone therapeutic bathing unit. Invented by a Scot, William Oliver, this was not for the faint-hearted as you sat in a metal tank of water whilst air was forced through vigorously. 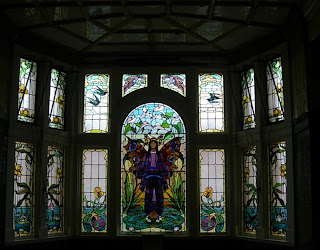 The quality and abundance of the facilities are testament to the standing of these baths when they were built and for most of the 20th century but these windows in the First Class Males clubroom are one of the most remarkable features.
Posted by Peter at 11:08 No comments:

The Unknown Soldier
Every year we observe two minutes' silence to think of those who died fighting for their country. All over the country people gather at war memorials commemorating the local losses but just as poignant are the services to the Unknown Warrior. As far back as I can remember there has been an Unknown Warrior: but how and when did this term come to be? When I was cycling in France some years ago (where every village also has a war memorial) I often came across small war cemeteries tucked away in clearings in woods, or alongside a farm outbuilding. These sometimes comprised as few as 20 graves of men who had fallen in that place and who had been buried where they fell. I found them more moving than the large cemeteries at Etaples and elsewhere.
The idea for a national monument to commemorate all those who die in battle was first porpoised by an army chaplain, Rev. David Railton to the Dean of Westminster Abbey. In order to ensure that the identity of the body to be interred in Westminster was truly unknown a selection was made from four bodies draped in Union Flags at a chapel in St. Pol, Arras, France. The battlefield from which the bodies had come was not known by the person who made the selection. This was done on 7th November, 1920. The next day the body, now in a simple coffin, was transferred under armed guard to Boulogne where it was guarded overnight by the French 8th Infantry. On the morning of November 9 the coffin was placed inside a casket made from oak trees from Hampton Court. This was banded with iron and crusader's sword from the royal collection was placed on top of the casket along with an iron shield inscribed
A British Warrior who fell in the Great War 1914-1918 for King and Country
The bier was drawn by six black horses through Boulogne accompanied by a guard of honour provided by French troops whilst The Last Post was played by the trumpets and bugles of the French Cavalry. All the church bells in Boulogne were tolled and the casket was piped aboard the destroyer HMS Verdun and escorted to Dover by six battleships. On arrival at Dover a 19 gun Field Marshall's Salute was fired.
On November 11th a gun carriage of the Royal Horse Artillery carried the casket to Sir Edwin Lutyen's recently completed Cenotaph in Whitehall via The Mall. From the Cenotaph the cortege proceeded to Westminster Abbey followed by George V and other dignitaries. The route was flanked by 100 holders of the Victoria Cross and the guard of honour was proved by 100 women who had lost their husbands and all their sons in the war.
The coffin was buried in soil brought from each of the main battlefields and covered with silk. Some time later a black marble slab was placed over the tomb. It was inscribed with brass melted down from ammunition:
Beneath this stone rests the body of a British Warrior, Unknown by name or rank,brought from France to lie am on the most illustrious of the land.
Wherever and whenever we are we will remember them.
Posted by Peter at 22:12 No comments:

Seeing Red
Just before seven o'clock this morning I switched the radio on and caught the last few comments from a representative of BW on the Today programme. In response to the interviewer's question regarding sources of funds he said that BW raised considerable funds from property and other commercial activities.
BW ought to invest in a colour printer so they can see the red figures on their accounts. They seem blind to the fact that they lose money on most of their commercial activities. Their partnership with Scottish & Newcastle Breweries to exploit their pub portfolio. According to www.narrowboatworld.com, in the four years of this partnership BW has lost £22m. Their investment in Gloucester Quay has just been written off - another £33m. So where is this considerable income coming from?
There are two concerns here:
Firstly how can the management of BW be trusted if they are not honest in their public statements?
Secondly why did the BBC undertake an interview without doing any research? Their action reduced them to nothing more than part of the BW propaganda machine.
Posted by Peter at 10:15 No comments:

Bath Time - 1
We are taking a short break from Gecko to do some redecorating in our house in Bath which we let for holidays. Click here to see what you have been missing 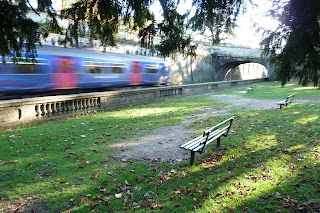 If you listened to the BBC Radio 4 programme on Tom Rolt you will no doubt remember the description of how Brunel constructed a theatrical passage through Sydney Gardens in Bath for the GWR.
This has long been a favourite view of mine and judging by the number of benches I am not alone in enjoying the spectacle of trains at close hand.
What the BBC did not tell us is that Network Rail have decided that it is too dangerous and so they are going to erect railings along this stretch. I guess Mr L. Finn Safety was not around 170 years ago when it was constructed.
Posted by Peter at 21:04 No comments:

Tom Rolt
Yesterday morning there was a programme on LTC Rolt.
If you want to listen to it on iPlayer here is the link:
Posted by Peter at 15:47 No comments:

What a Thought!
Yesterday's statistics prompted one reader to express surprise that 15% of the USA read my blog.
I hasten to clarify that the percentages relate to my readership not to the population of the countries concerned.
Thank you for your confidence, D.
Posted by Peter at 10:02 No comments:

Gecko International
I have just been looking at the reader statistics for my humble blog and am amazed at the wide geographical spread. The current figures for your interest are:
UK 72%
USA 15%
Germany 3%
France 2%
Australia 2%
Canada 2%
Russia 1%
Latvia 1%
S Korea 1%
Canada 1%
Brazil, Japan, Hungary, Netherlands, India, Serbia etc
I am not sure where my Colombian readers have gone to. Maybe they have found something better to do.
Perhaps I should try to make the content a little more cosmopolitan
Posted by Peter at 20:42 No comments:

Not Really Stoned
Whilst Psychic Sally was doing her stuff inside the new Waterside Theatre in Aylesbury I had a little wander around outside to see if I found the design any more pleasing at night. 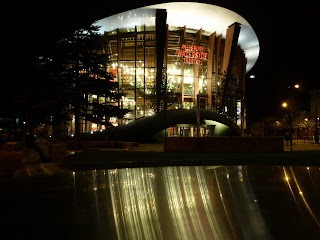 The front elevation is certainly more attractive when the lights are on.

I was not the only one out tonight: the road is closed for the contractors to lay those small stone sets that seem to be the current urban fashion.
Shock!
Horror! 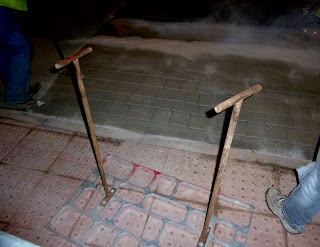 What appears to simple folk like me to be carefully laid blocks is actually poured on steaming hot, smoothed out, dusted with some surface coating and then the 'joints' are pressed in with a giant pastry cutter. To complete the deception the joints are individually manicured with further tools. This would never have happened in Telford's day!
Posted by Peter at 22:21 No comments:

Aylesbury Car Park Theatre
Aylesbury Canal Society should win an award for the efficient use of space. 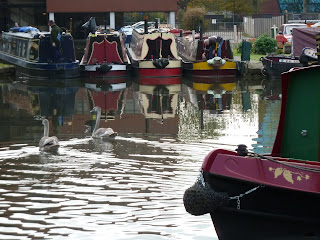 With 40 years' experience of packing boats into the basin they still seem to get more in each winter. Last time we wintered here we had to move seven boats in order to get out.

On our way down here on Sunday we encountered unexpected problems in the two-mile pound below lock 13. To remind yourself of what this looks like in the summer go to the archives in the right-hand panel and pull up the blog entry on 21 June 2007 - Pull Harder Mr Allnut. Although narrow, this is one of the few places on the arm where the water depth is usually adequate. Not since BW have employed their new reed cutter. This apparatus, I am told, has removed the reeds from the banks and deposited them in the centre of the channel. This is why we ran aground. There is some question over whether this process has removed the roots along with the reeds. If so, when the summer comes there will be no passage at all for Mr. Allnut. 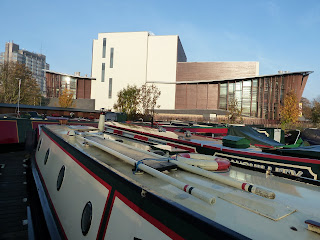 The new theatre has appeared alongside the canal basin over the past two years and is now open. Aylesbury Vale Council held a competition to find a name for it and selected the wholly original one of Waterside Theatre. Given that the River Thame runs through the town at this point they could have gone a step further and called it Thameside!
Personally I think the council should have come clean and called it the Car Park Theatre to reflect their proposal to fill in the canal basin 40 years ago and make a car park here. As they are due to evict the boats shortly I guess we have to applaud their honesty in not calling it The Boat despite many people comparing its shape to that of a tug.
Posted by Peter at 09:27 No comments: