Many of the boats attending the Braunston historical Boat Festival at the weekend have come past us on their way home . Today, however the traffic has been predominently in the opposite direction and amongst them were Kangaroo towing Australia.

That is not particularly noteworthy but what is amazing is the visitor we had this afternoon.
A distant relative who lives in New Zealand and who we last saw out there four years ago was taking a circular walk this afternoon from Flore and recognised Gecko moored near Norton Jct and stopped by.
We had no idea he was in the UK and he had no idea where we were.

I have been selling off my collection of Matchbox and other models over the years since I worked for them back in the 1980s.  The remains are now on eBay if you are interested. 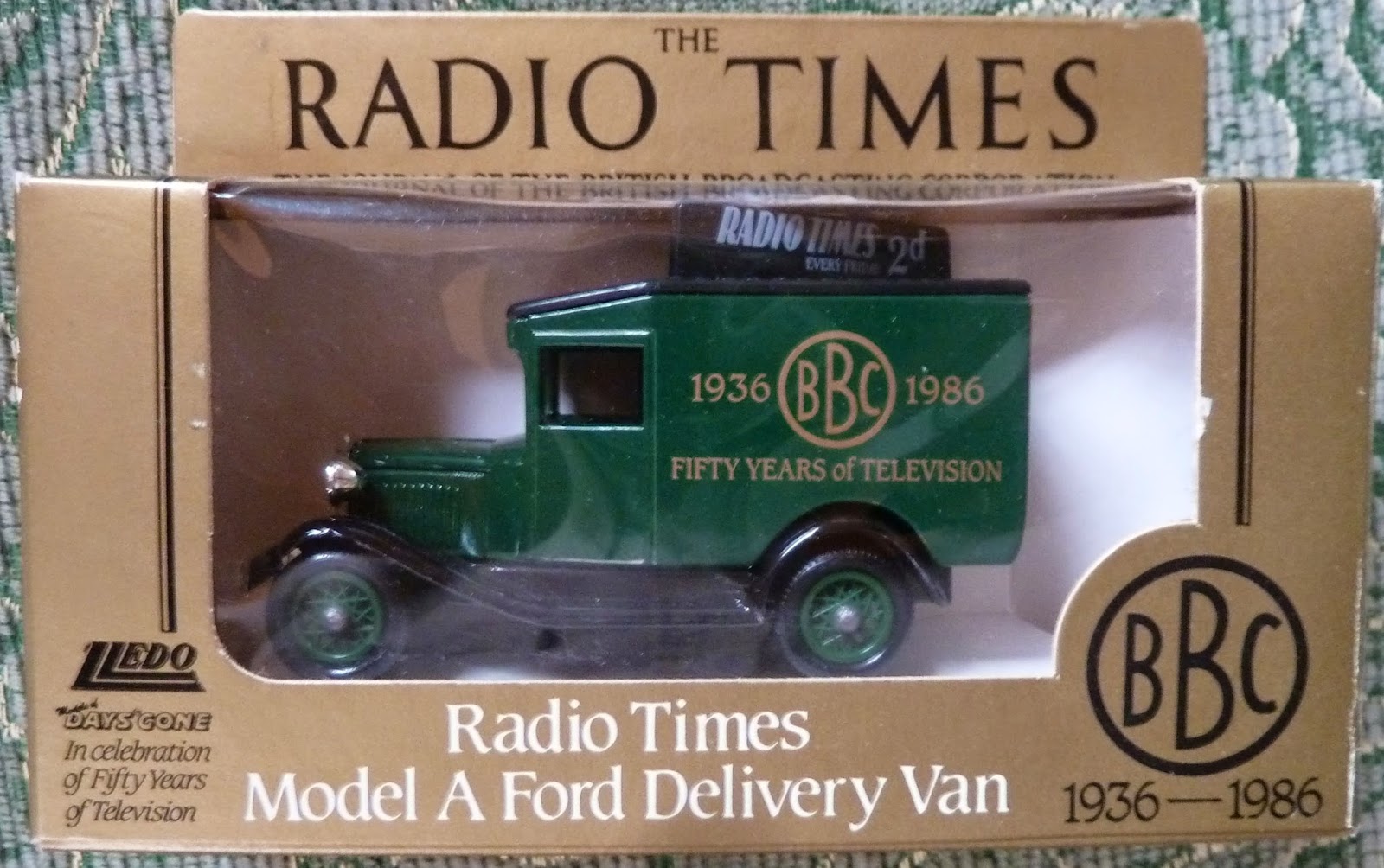 When Matchbox went into liquidation in 1982, Jack O'Dell  set up LLedo Ltd and produced models under the Days Gone banner.He produced a wide range of promotional models of which this is a fine example,Celebrating 50 years of the Radio Times. 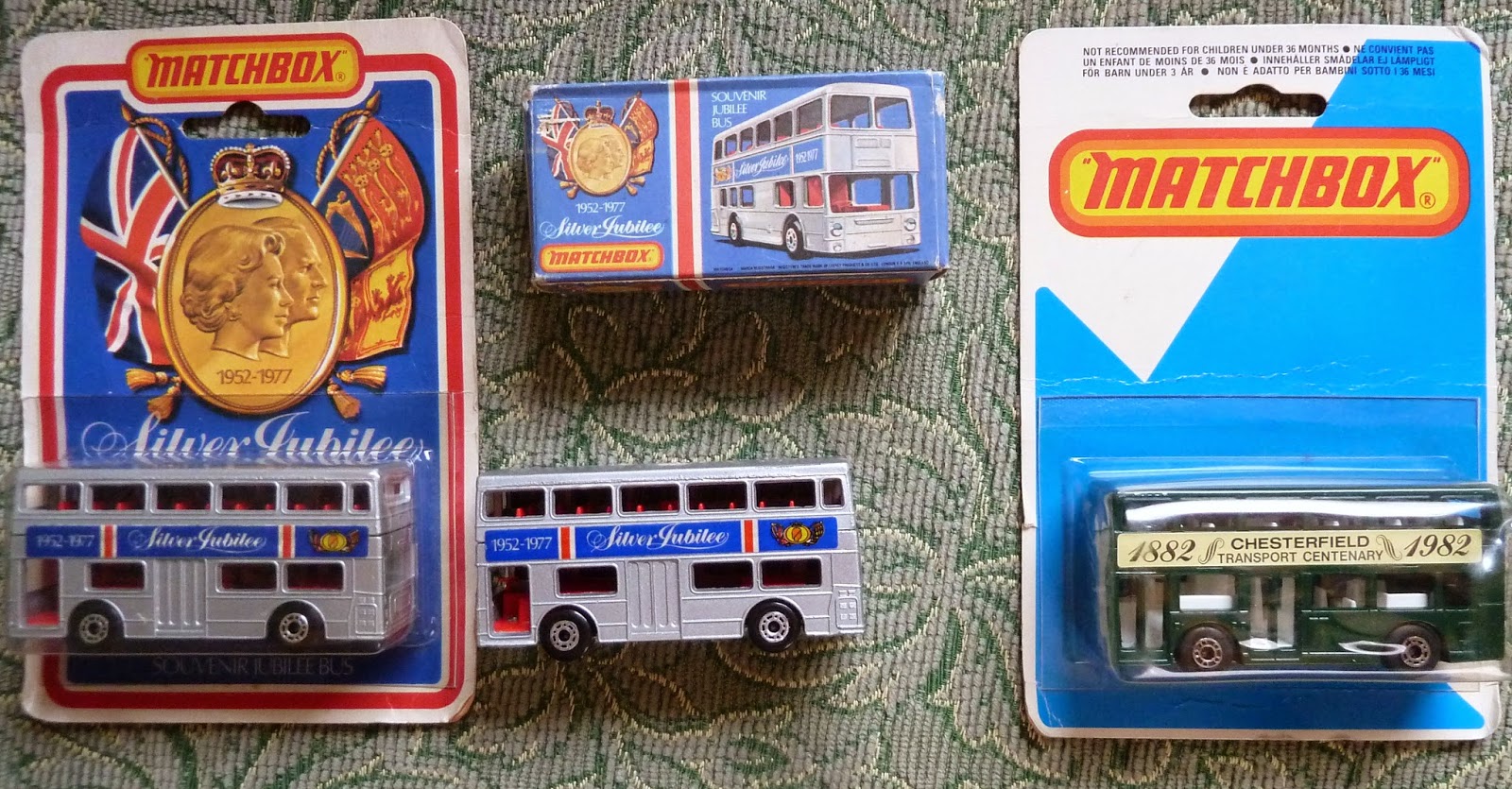 The Chesterfield Centenary bus was one of the last models to be introduced by Matchbox. 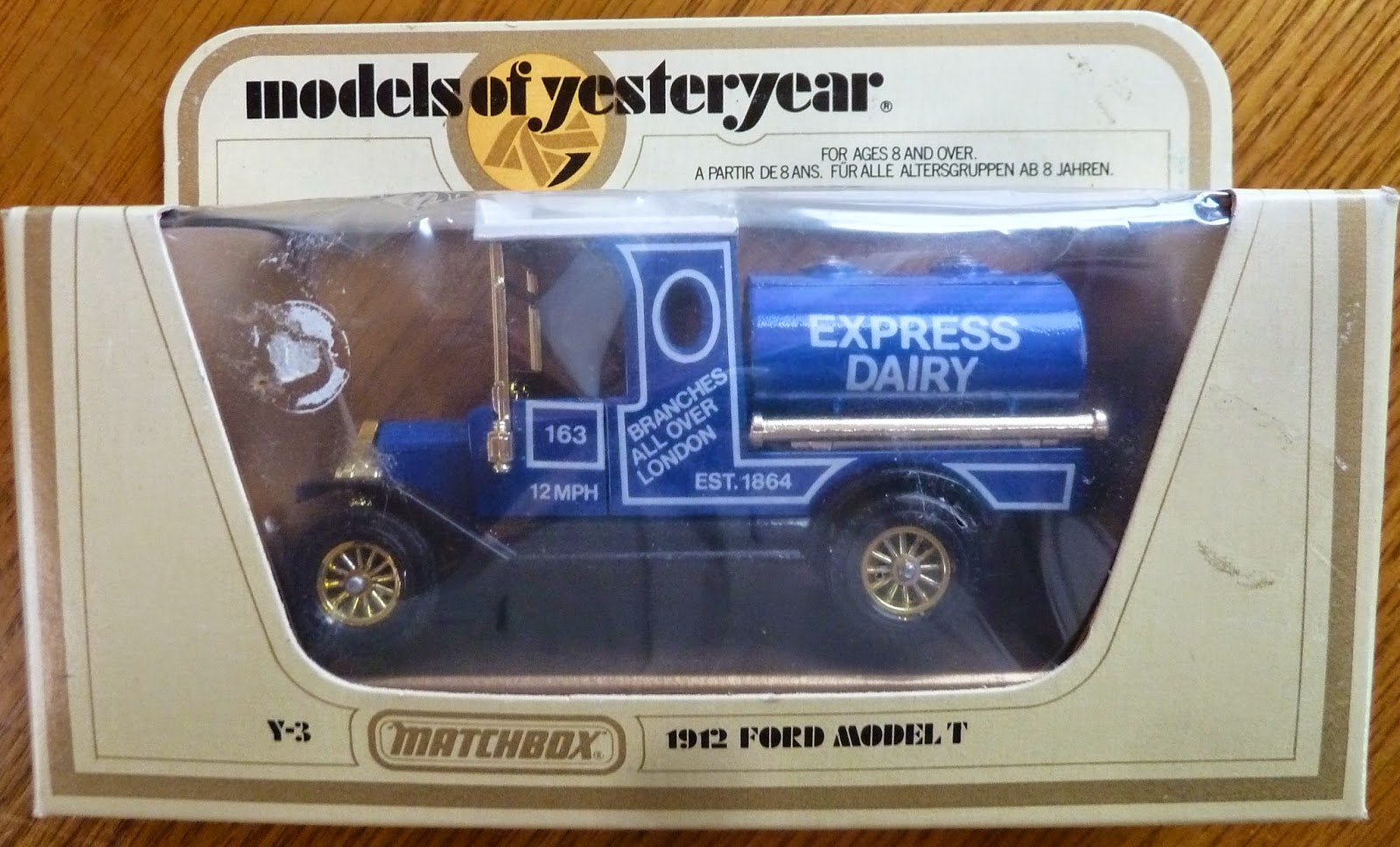 The Y3 Ford Model T tanker appeared in numerous liveries in the 1980s, including this one advertising Express Dairies, in an attempt to boost sales. 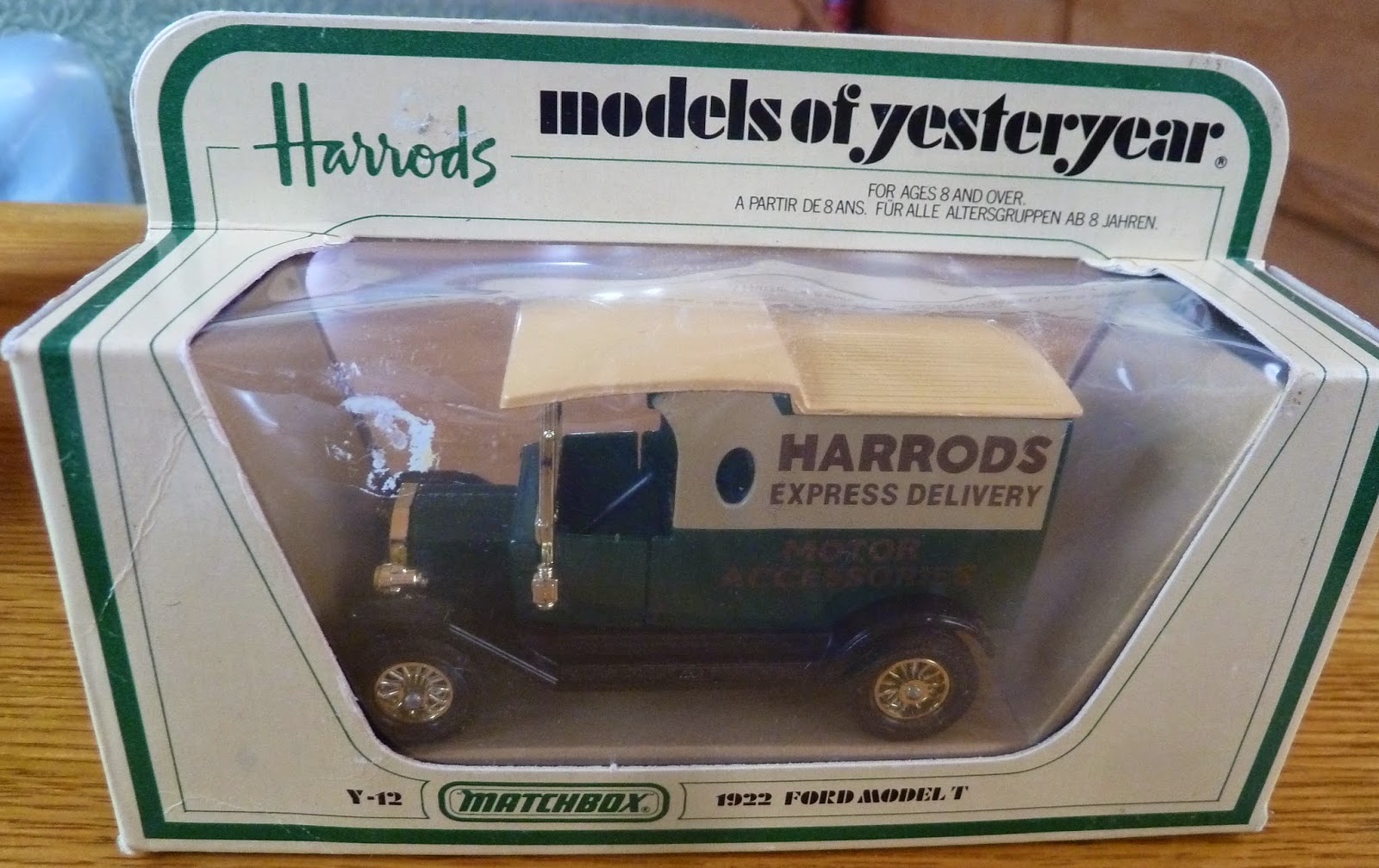 The various Harrods vans which appeared over the years were always popular. 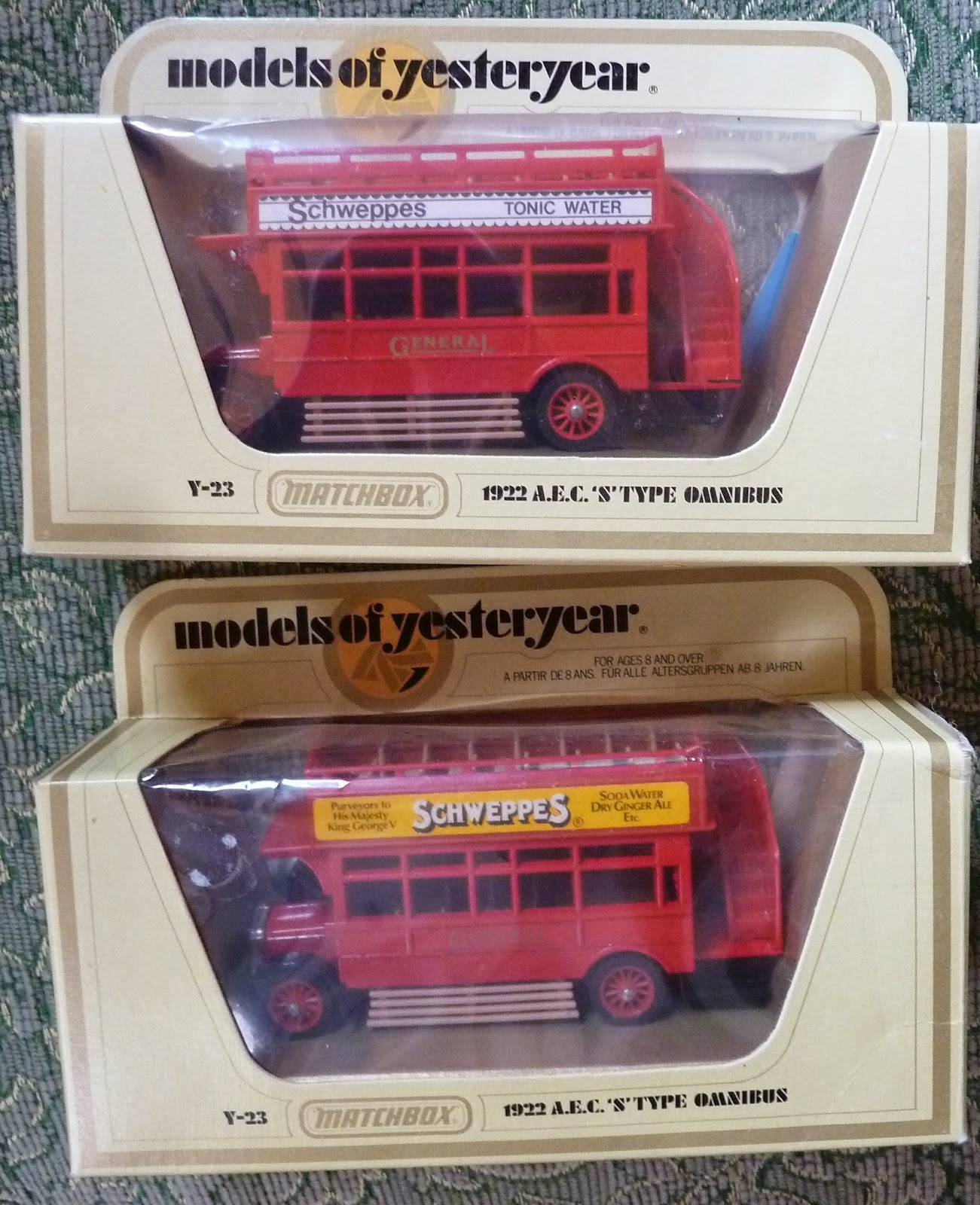 From time to time this old London bus had a change in its advertising panels.  Here are two  different examples both for Schweppes

As we approached Wolverton we were pleased to see that Bill Billings' mural has been refurbished. Bill created this as part of a scheme to assist disadvantaged children in 1986. Although Bill died in 2007 his son, Ray, with the help of Milton Keynes IWA and some community Payback offenders removed the graffiti and repainted it in 2011.   I have often said that it is the little things which make canal life interesting but this is no small achievement

Read this 160metre long mural from left to right.

Now we know where the boats are - about twenty boats passed us between 7am and 10am today.  All, we suspect,  were headed for Braunston gathering of historic boats which takes place this weekend. The Met Office forecast told us to expect heavy rain from noon onwards and we planned to ascend Buckby locks today. Our plan would have been to set off at 7am in order to arrive before the weather broke but we had an important appointment - two C&RT staff were joining us for the journey as part of the Boat Buddies scheme. 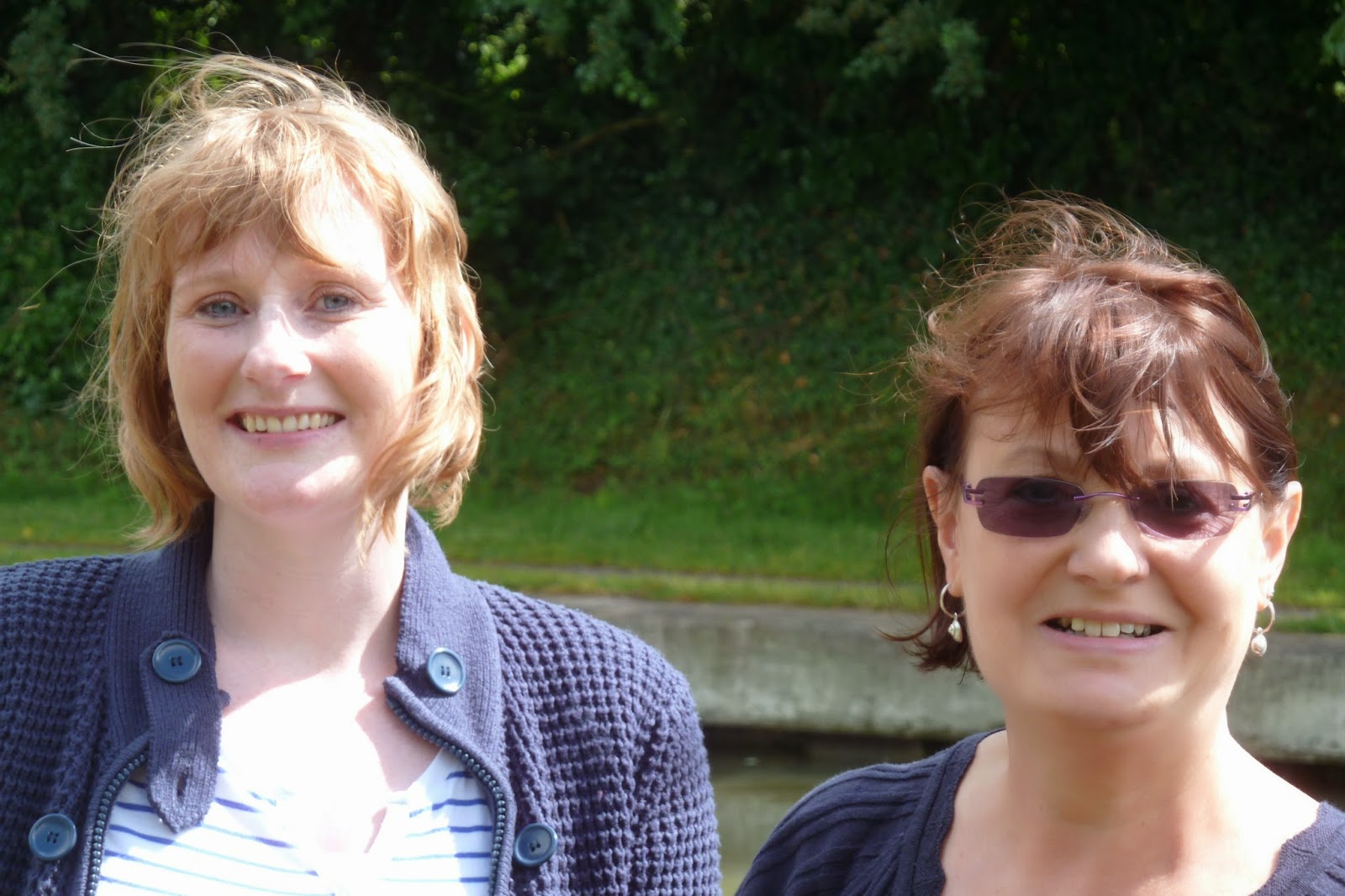 Sarah and Barbara both work in the C&RT South East Area office in Milton Keynes.


And yes, the rain arrived around noon and soaked us all but they worked the locks gallantly.


They don't look too traumatised by the experience. 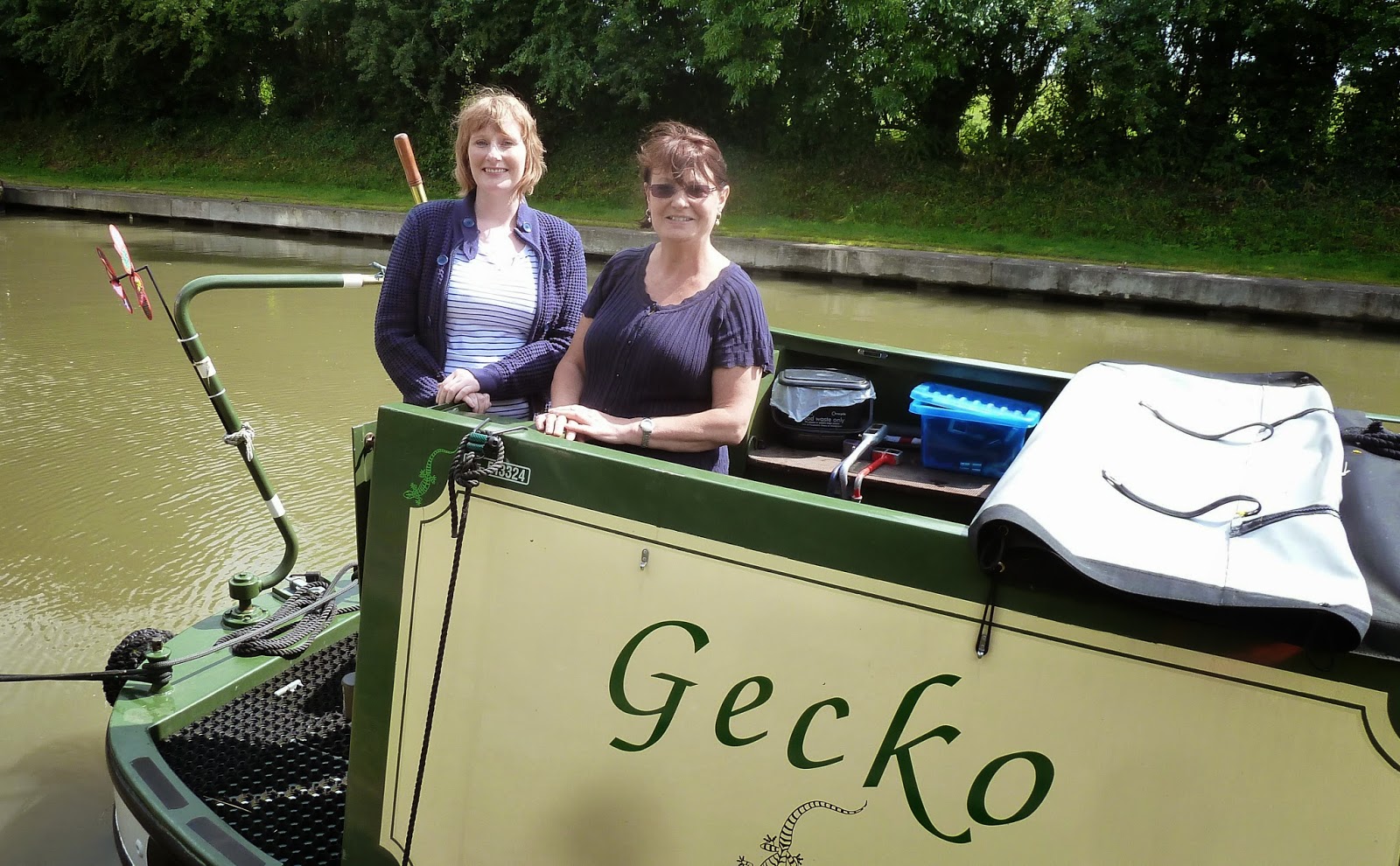 Our Risk Assessment for this photo shoot considered that  as:
1-The engine was switched off
2-The boat was securely moored
3-Both subjects were holding on
that life jackets were  not required.

Thank you buddies for your company and assistance: hope you found the experience interesting and enjoyable.

What is the relationship between these buildings? 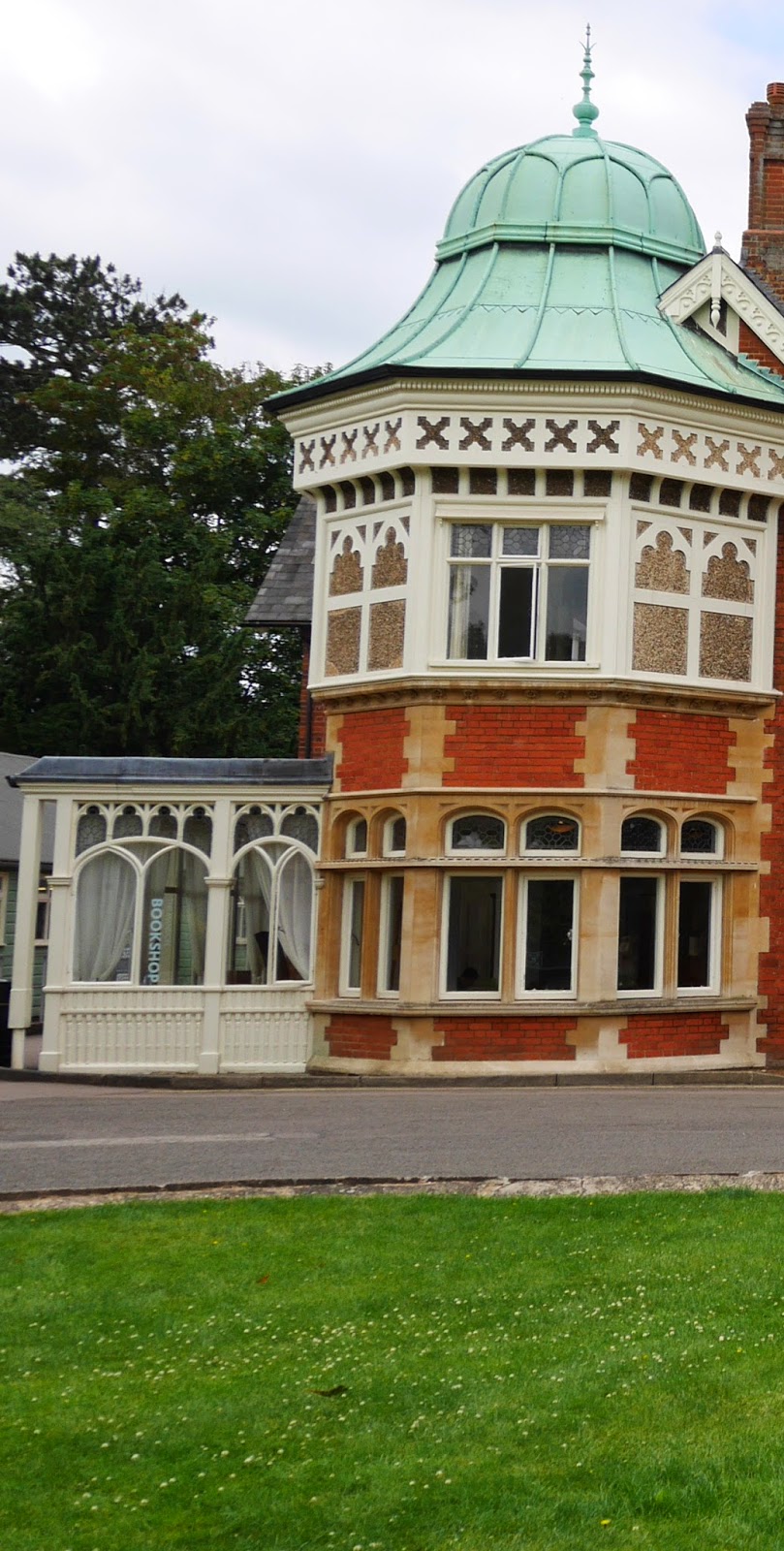 If you worked at Bletchley Park you might find it easy 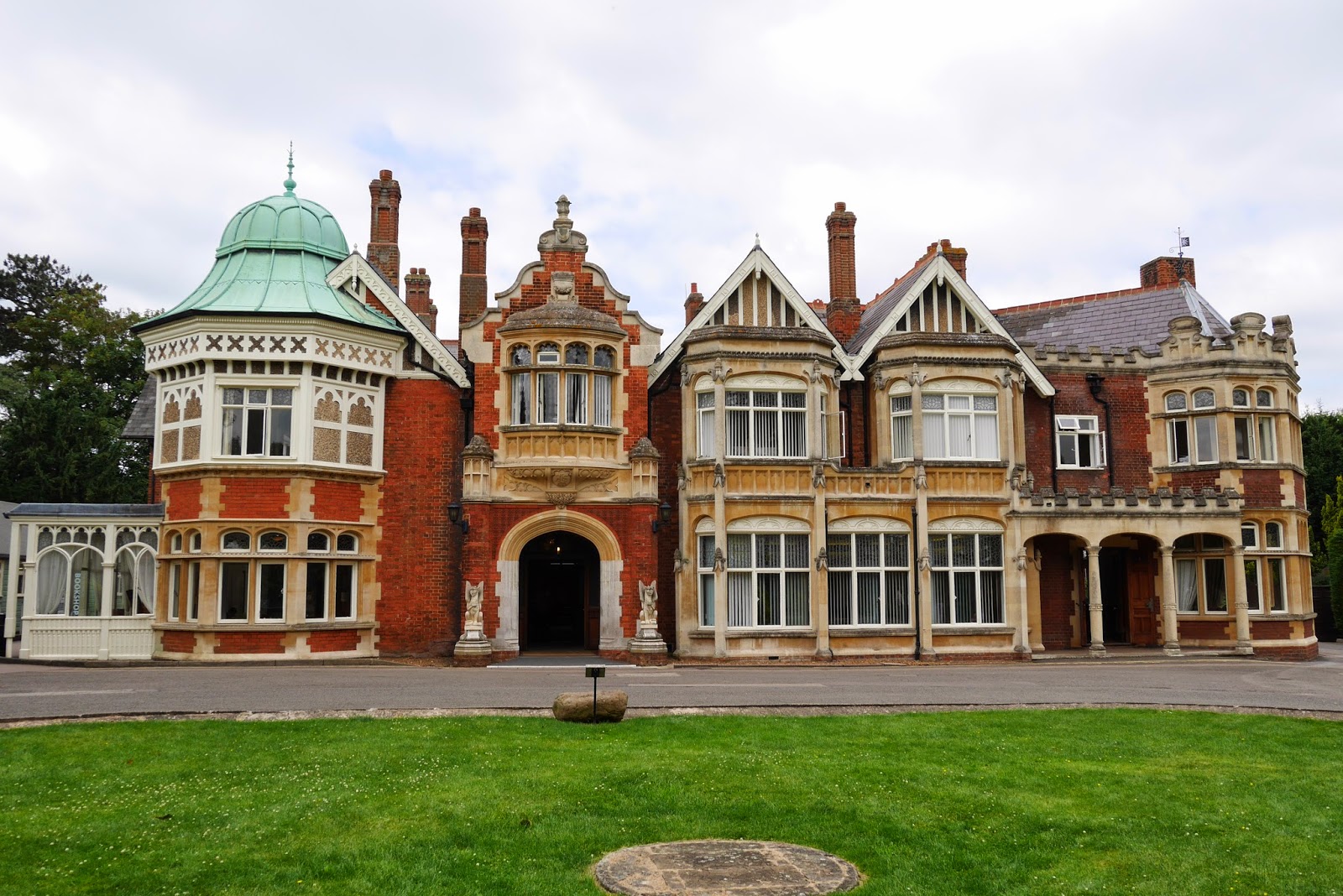 Is this the ugliest building in Britain?

Where are all the boats?

We set out again from Circus Field, Aylesbury ten days ago and have travelled up the Grand Union as far as Weedon.  During that time we have negotiated 22 broad locks - 14 down and 8 up. We have managed to share about half of the downhill ones. and none of the uphill ones. Our overnight stops have been:
Marsworth Jct - several mooring spaces (unusual)
Ivinghoe
Globe Inn, Leighton Buzzard - never seen a space there before - we had a choice. (nice snacks but home-made cheese straws are not cheesy enough
Fenny Stratford - when we left all the visitor moorings were empty apart from a South African couple spending their 5th day on the 24hour mooring.
Wolverton - by the new flats - plenty of space
Stoke Bruerne - five locks up - only four boats
Blisworth - on our own again
Weedon - two of us overnight although more stopped for shopping or lunch.
It may not be very scientific or statistically accurate but our observations are that there are  fewer boats moving than two years ago and more boats for sale.  Visitor moorings are generally less occupied but away from civilisation there are groups of moored boats in locations we have never seen occupied before. Coupled with our experiences earlier this year in London and talking to other people it seems that there has been an increase in people living on boats as cheap housing rather than for the canal experience. 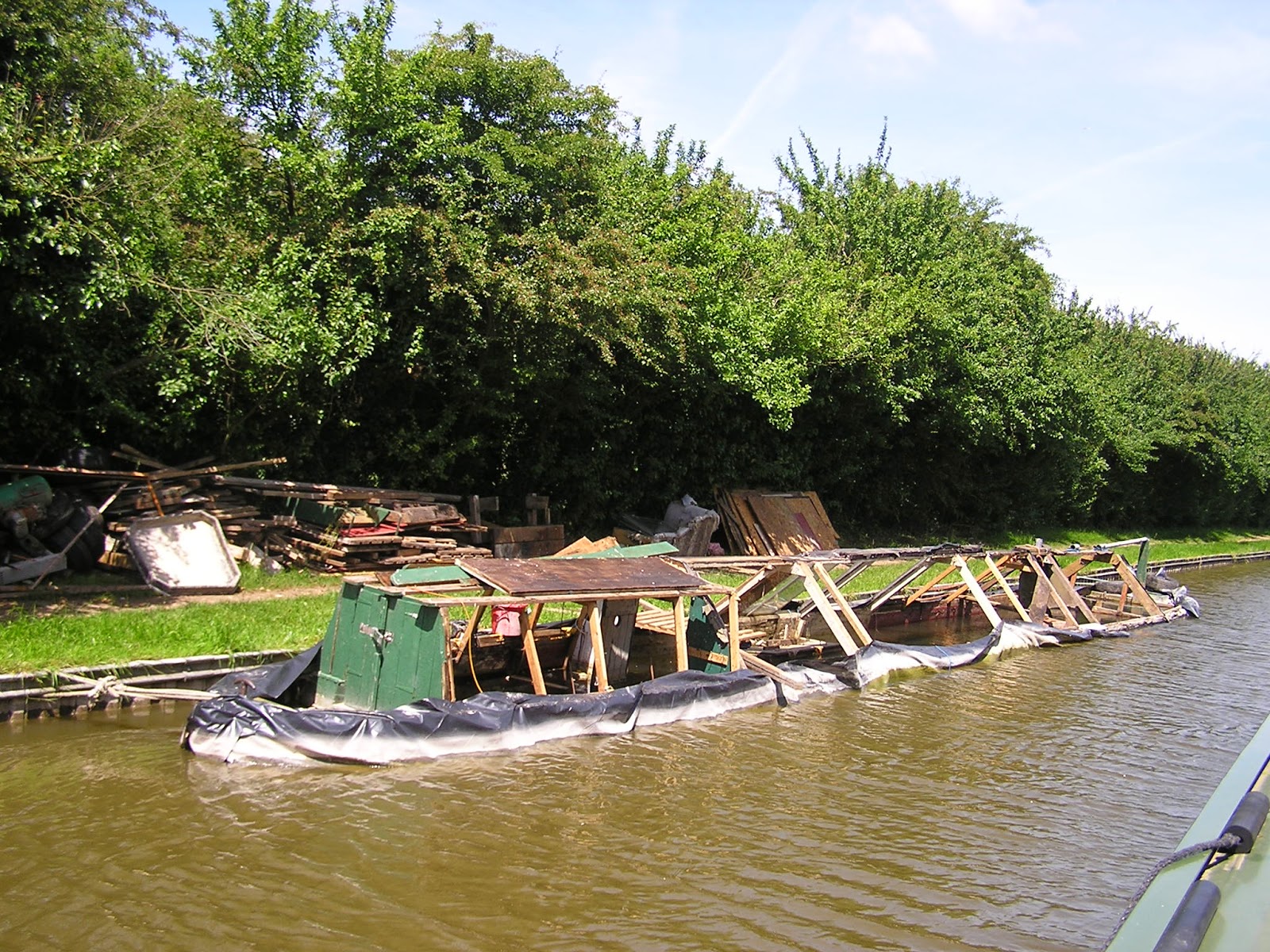 At Pitstone they, apparently, fit out the boat before making it water-tight. 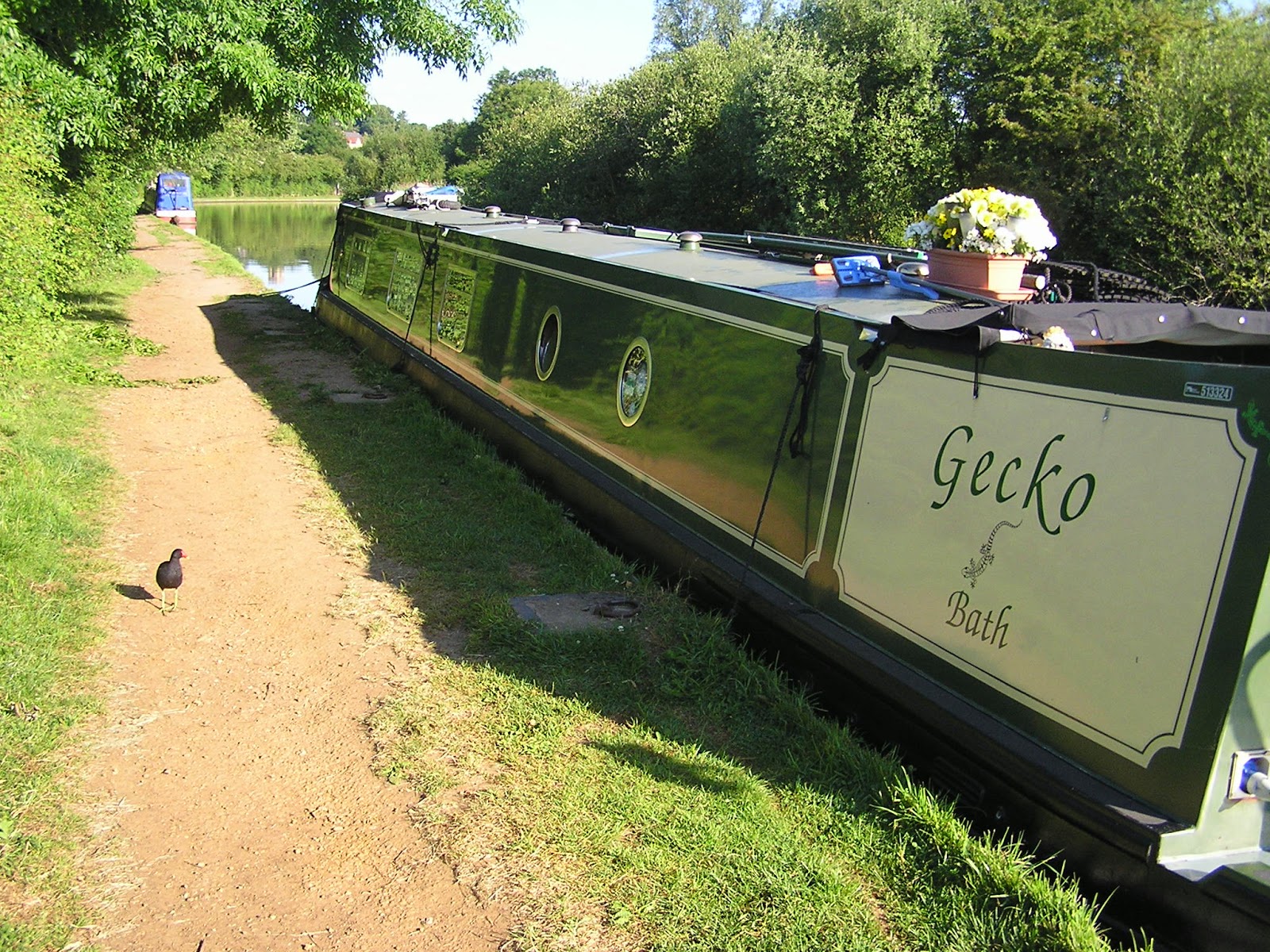 At Stoke Bruerne our nearest neighbour was a Moorhen

Despite fewer boats around we have seen a few old friends:
Exe and Fulbourne were both moored near Grafton Regis
Marmite has moved to the other end of the Taverners' BC moorings
Alderbaron was way off its normal patch and we passed too early in the day to knock them up
Yorkshire Tyke  from Strawberry Island - last seen on L&L
Pengalanty

I don't remember when, but we had to go down to Bath for some chores relating to our house down there and the Murvi also needed some equipment servicing which was down in Hampshire. So we filled in the gaps between these events by visiting some long-neglected friends. 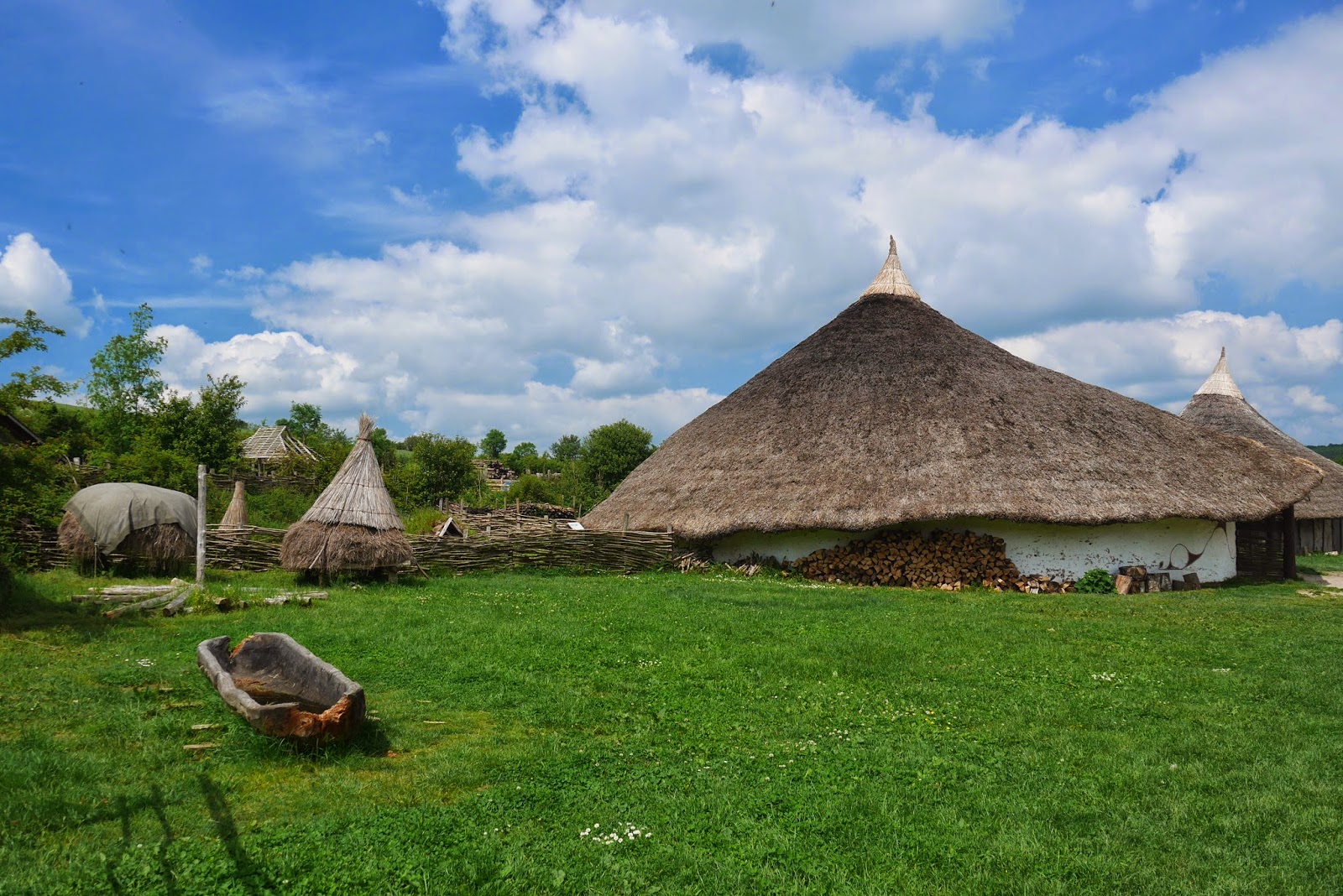 This reconstructed iron-age village is not at Butser hill any more - it has moved to the other side of the A3. 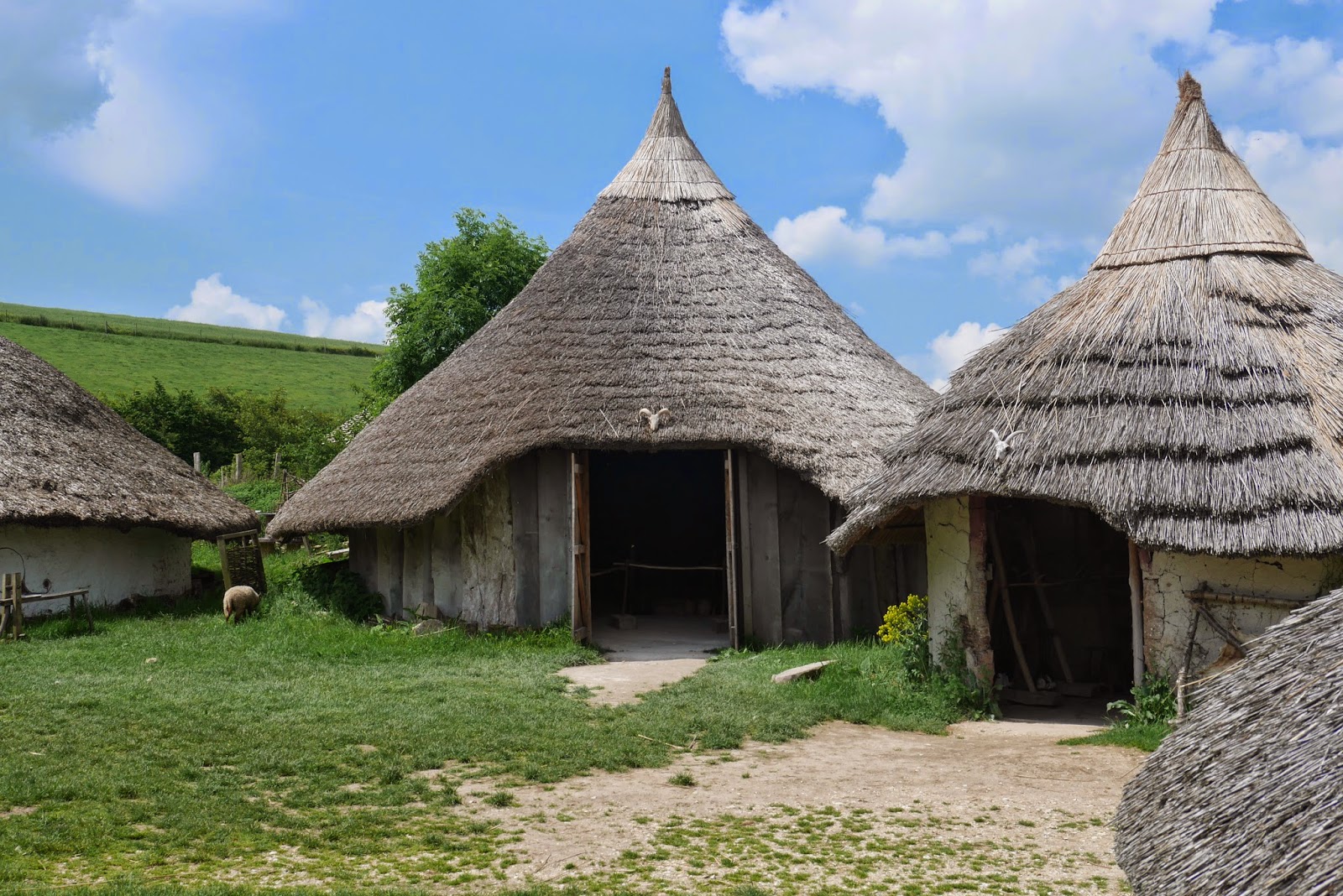 Although there is no evidence of iron-age settlement here, all the buildings have been constructed using data from various archaeological sites around the country. 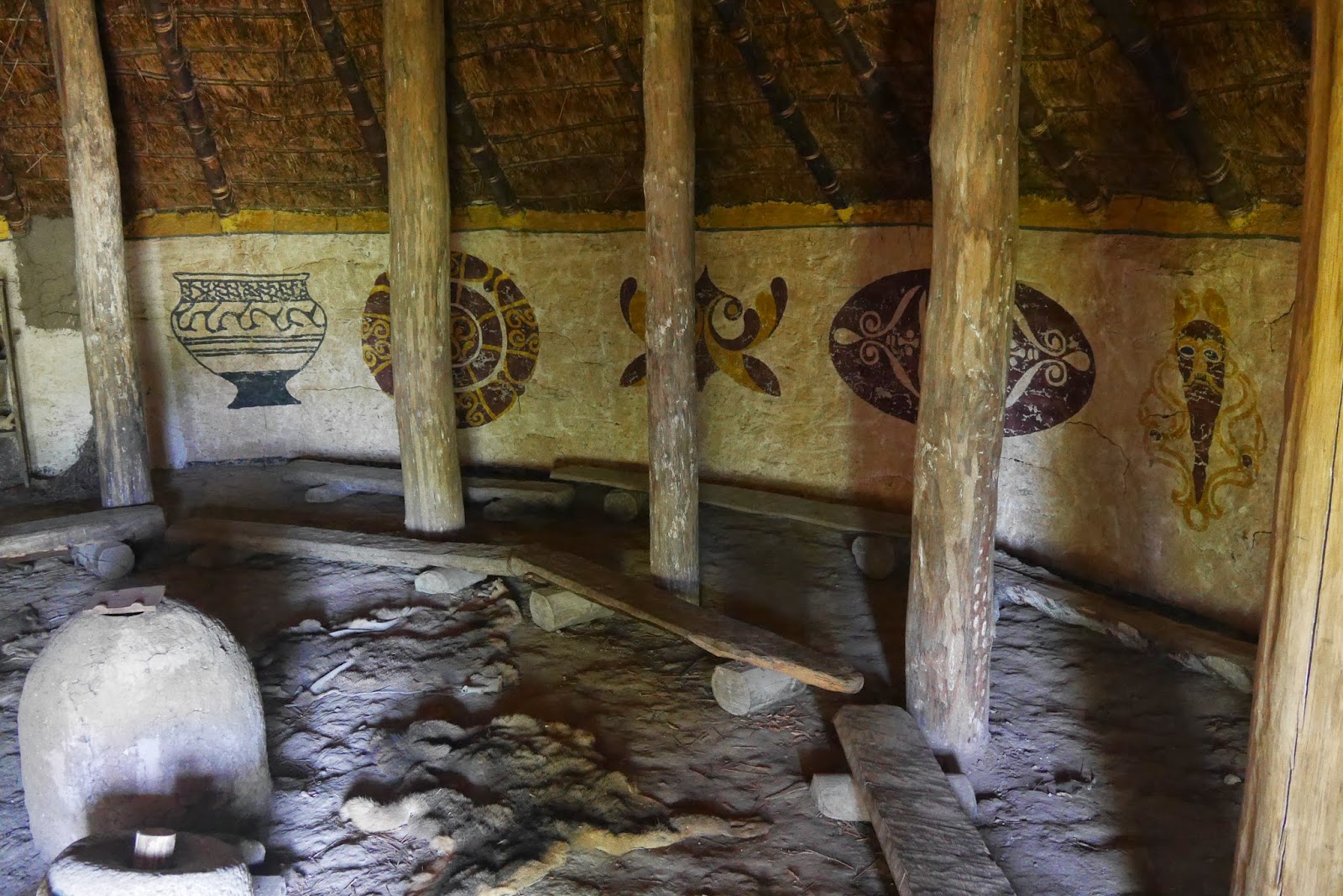 The materials and techniques are as authentic as is possible with the information available and so a house you see here will be a true replica of one known to have existed somewhere in the UK. 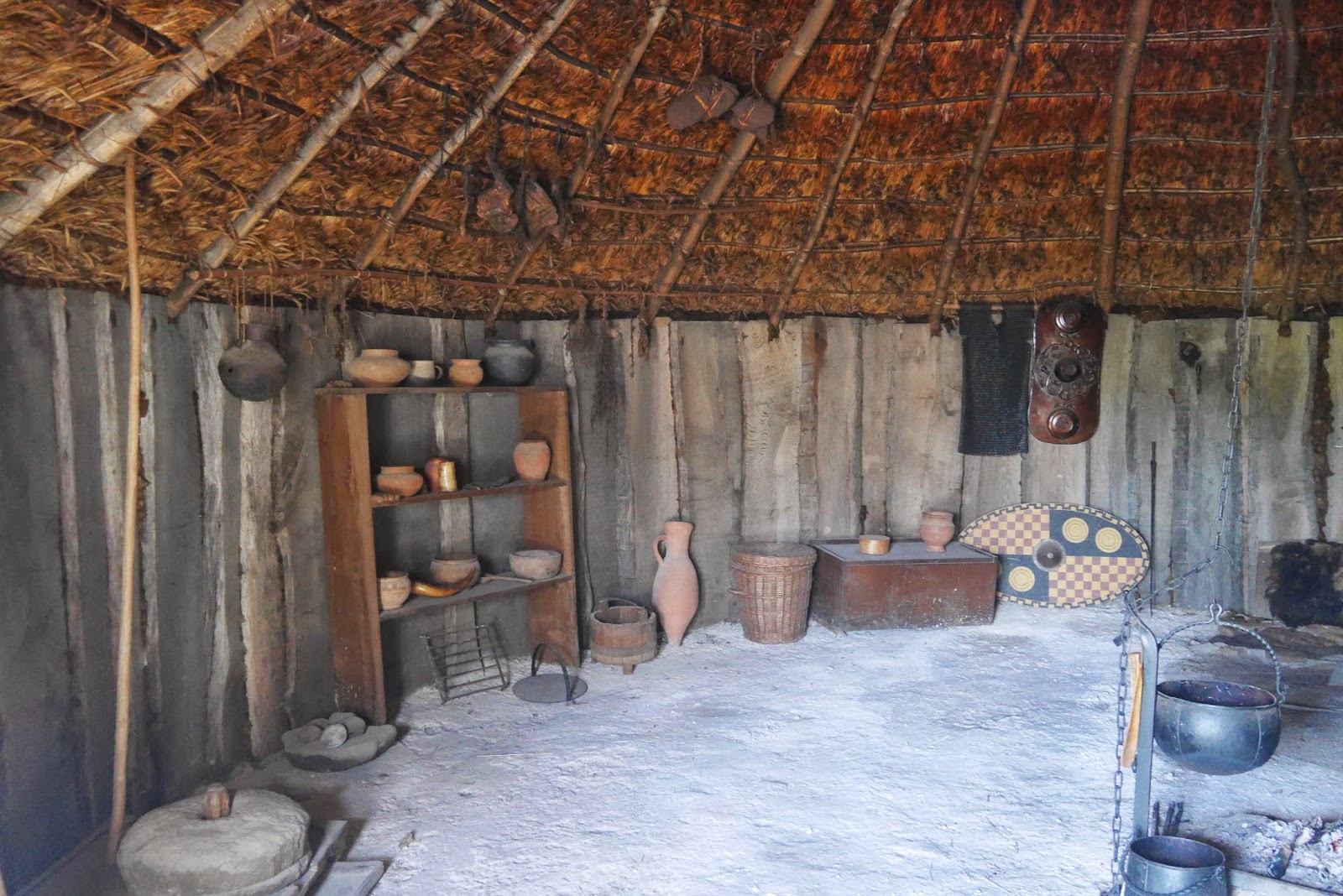 This dedication to authenticity extends to the interiors as well as the exteriors. 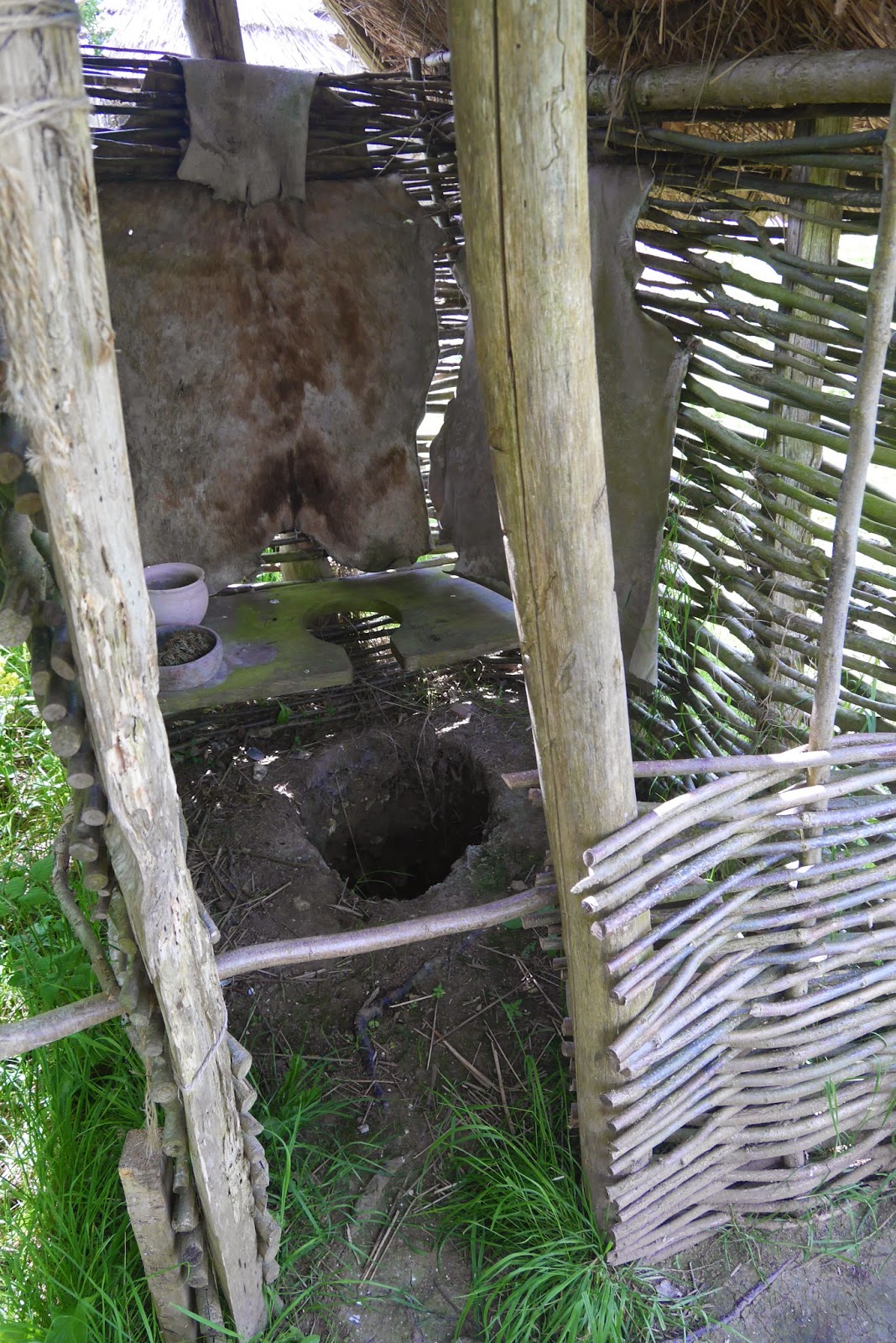 You would not expect such dedication to omit something as important as the toilet.

Fortunately there were no demonstrations of this aspect of iron-age living. 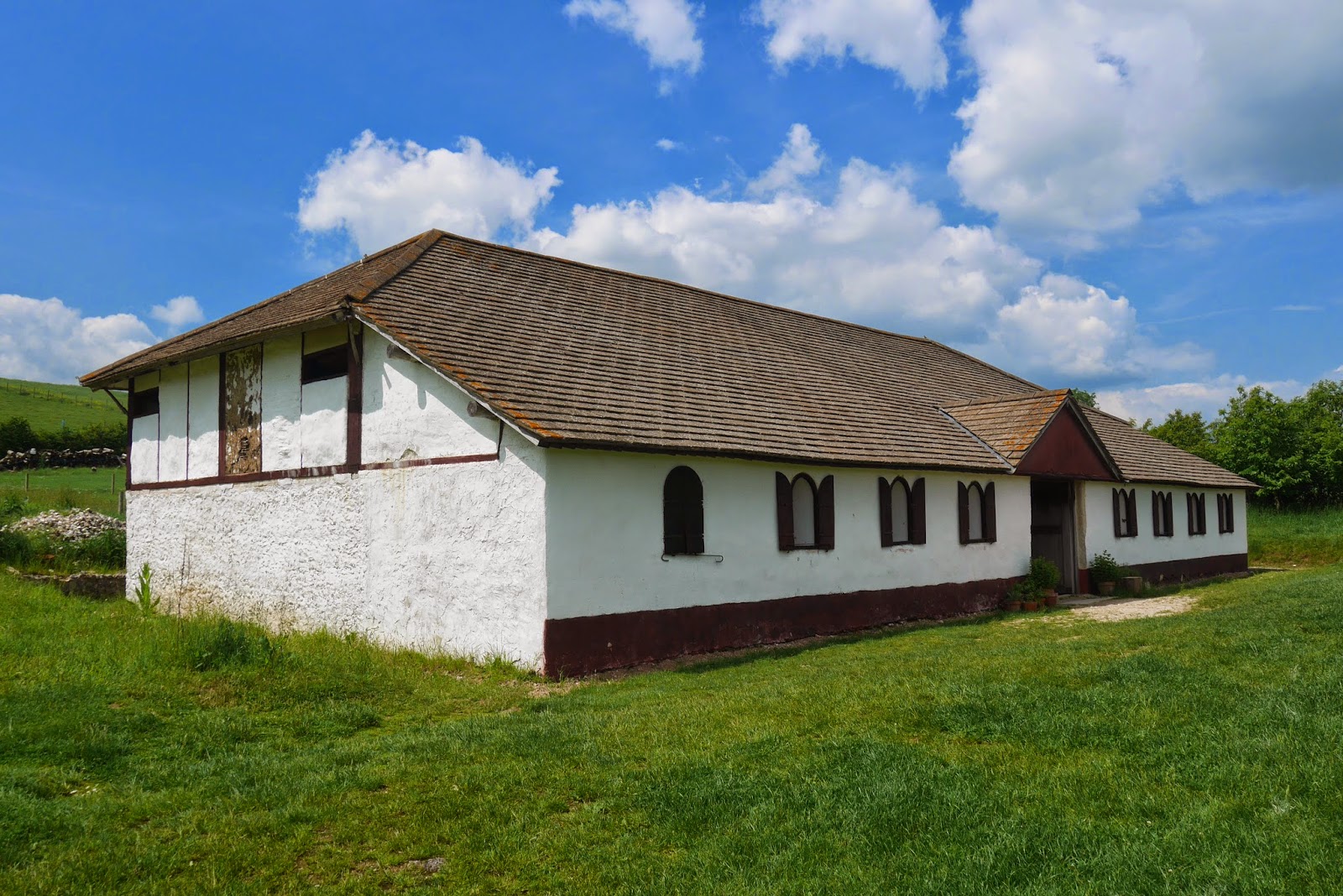 Also on the site is a reconstruction of a Roman house which was built for a TV programme (Channel 4?) which led to a few compromises which I felt were unacceptable to some staff. I guess it was a case of he who pays the piper calls the tune. 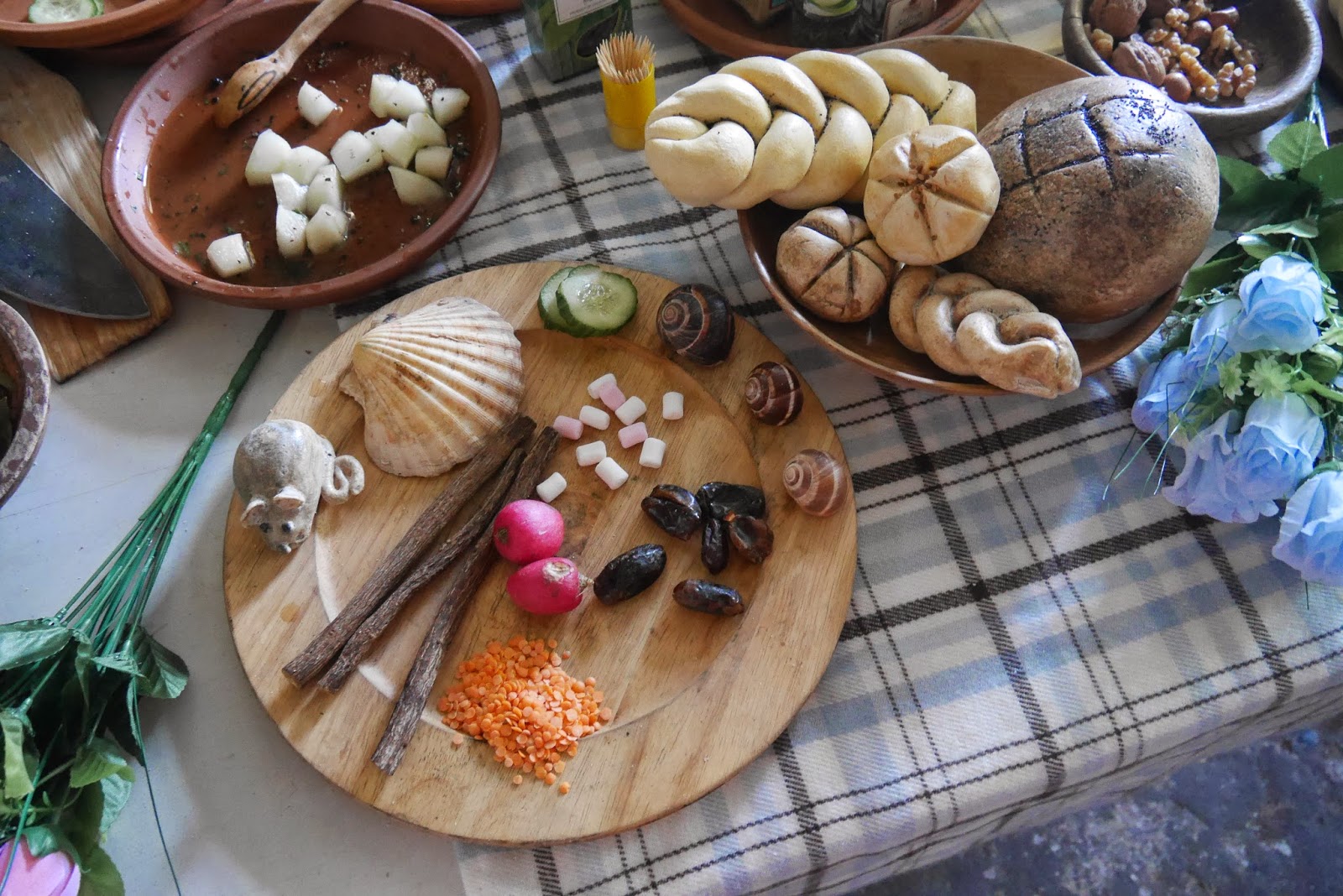 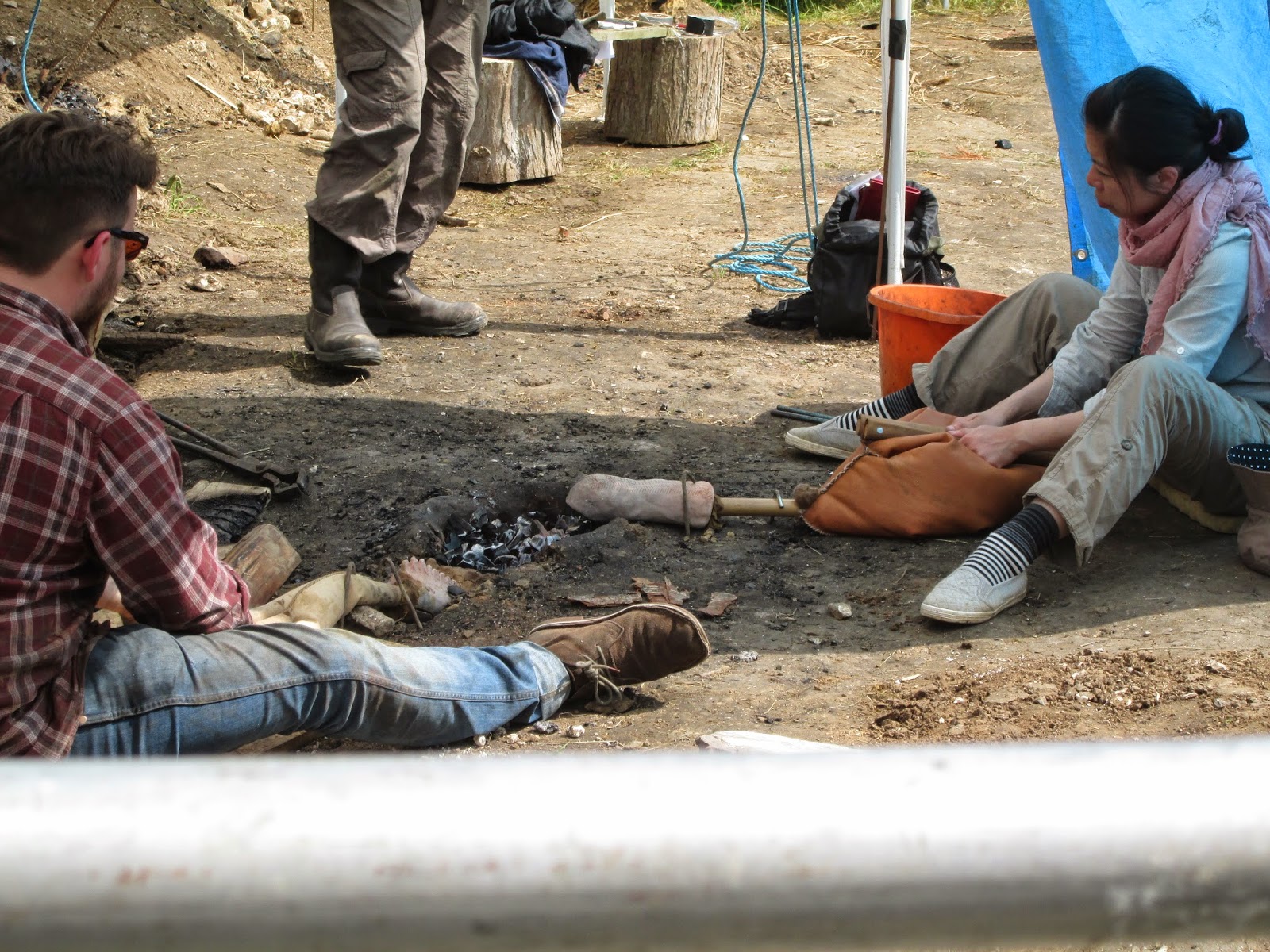 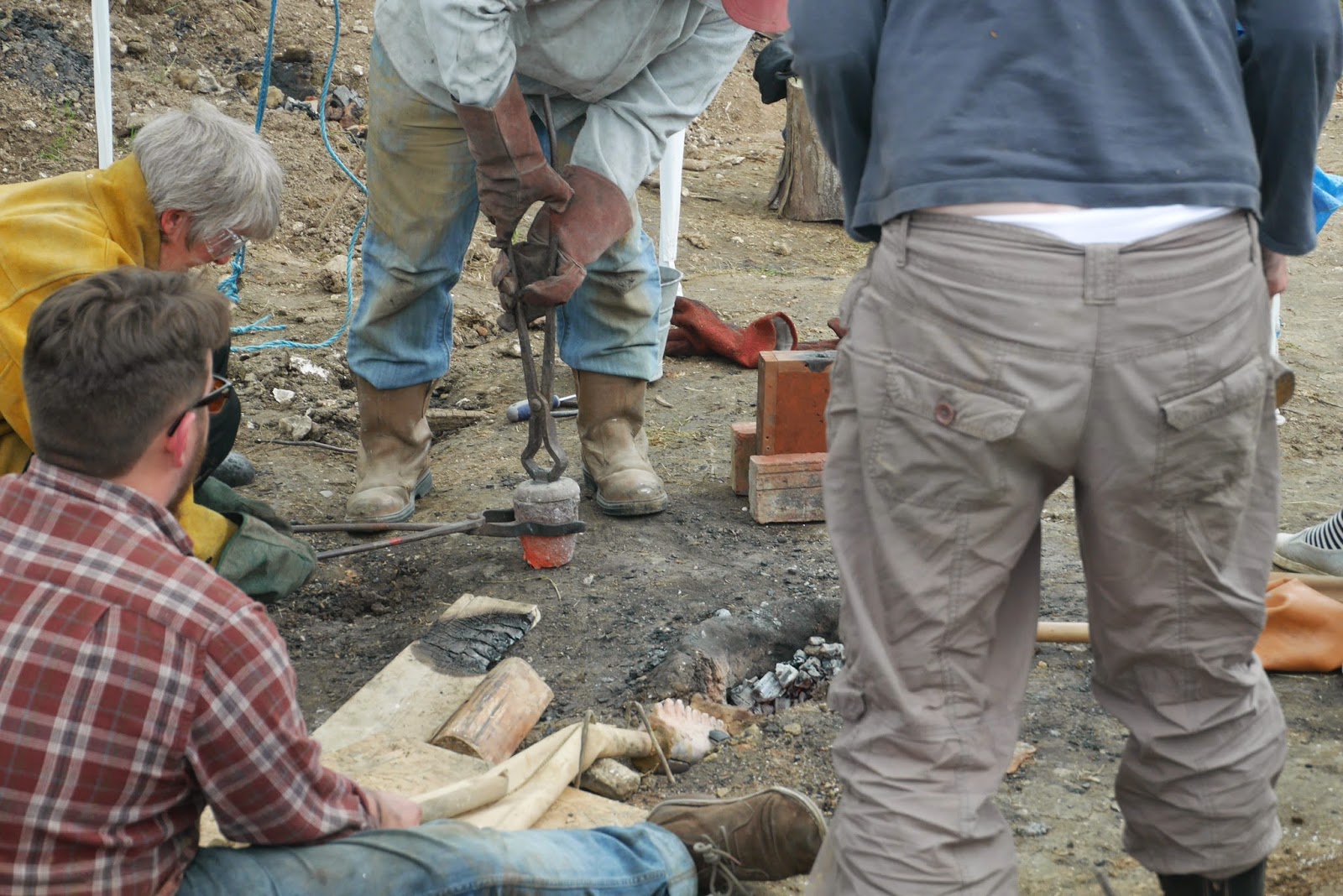 Butser Hill also runs workshops and on the day we visited a group were learning how to smelt bronze the iron-age way.  ie: with hand bellows.  Iron-age man had not developed valves so the air sack is opened to scoop up air which is then closed and squeezed down the tube - for hours. Unfortunately on this occasion the modern crucible was not sufficiently conductive and the metals did not meld.

Our life has suddenly become rather frantic and that state does not fit well with the normal pace of things on the canal.  Hence the absence of postings for the past fortnight.  This will be rectified very shortly.
Posted by Peter at 16:39 No comments:

Aylesbury Canal - the next closure?

Last year the Aylesbury Arm was closed for eight months because  a wholly predictable  lock collapse took that long to repair. Why it took so long and cost £800,000 I  do not understand. About 25 boats which had spent the winter in Aylesbury had to be lifted out by crane and put back in the main line.  at Milton Keynes.  In the autumn they had to be lifted out and transferred back to Aylesbury.  All this had to be paid for by C&RT.
Last Wednesday we came down the arm from Marsworth to Circus Field, the new canal basin built for Aylesbury Canal Society.  At lock 9 the water was leaking so fast that it was draining the pound above. I reported to C&RT that the off-side paddle appeared to have failed.

This time the canal was closed for a week whilst repairs were carried out. 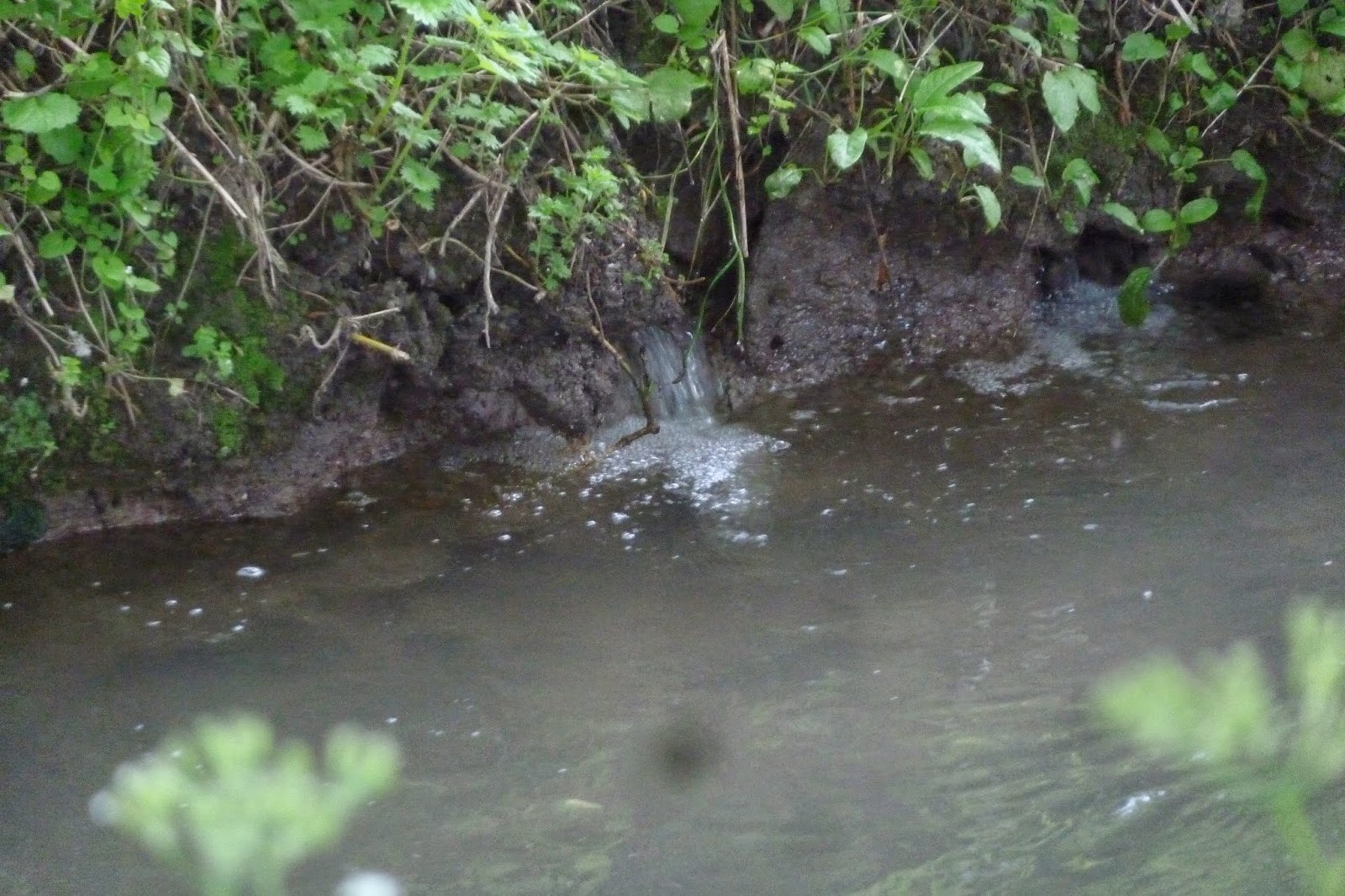 For some time now there have been two leaks in the canal bank opposite the Circus Field basin.  C&RT are aware of it. Water is leaving the canal under the towpath and draining into the stream alongside.

How serious does this have to be before remedial action is taken?
Answers on a postcard, please.
Posted by Peter at 11:26 No comments: