Gecko International
My readership over the last month is still fairly international.  I suspect that a fair proportion of the overseas readers find me through a search engine, judging by the posts that are read. For those who are intersted these are the figures:
%    Country
66 - UK
9 -  USA
7 -  Germany
6 -  Netherlands
4  - Australia
2  - Philipines
2  - France
1  - Norway
1  - Hungary
1  - Russia
2  - ROW
Posted by Peter at 16:39 No comments:

Peter Diamond
Since we bought our house in Bath (which is available for holidays) I have enjoyed reading the detective stories by Peter Lovesey which are set in that lovely city. The central character is Detective Superintendent Peter Diamond. The last one in the series of ten- Skeleton Hill - I finished lat night and much of the action takes place around Beckford's Tower, my Landmark of the Week.
Posted by Peter at 10:42 No comments: 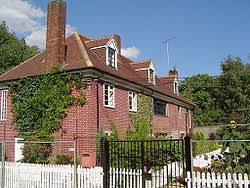 I have been reminded by a reader than the MTV studios were previously used by TV-AM, hence the chukky eggs on the roof.Not far away - on the Hertford Union Canal - were the three lock keepers cottages at Old Ford which were knocked together to provide the setting forT he Big Breakfast. The production company which made BB was owned by Bob Geldorf and the house went through several attempts at remodelling during its TV career. I think it was even given white rendering at one stage. After the demise of BB it was sold to a private owner who converted it even more. It is now within the 2012 Olympic redevelopment zone so it may get altered further.
Posted by Peter at 13:39 No comments:

Email ThisBlogThis!Share to TwitterShare to FacebookShare to Pinterest
My Landmark of the Week
Beckford's Tower 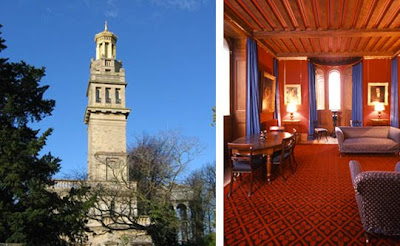 Aylesbury Basin to Camden Locks in under 2 hours 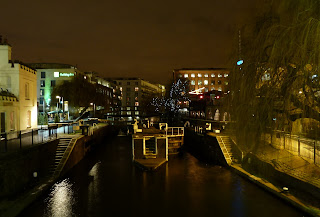 Last night we attended a recording by BBC 2 of a programme for Book Week.
This took place at the MTV studios near Camden Locks. When travelling from Paddington the building is on the left and has a row of boiled eggs along the parapet.
As the night was relatively clear I took the opportunity of snapping the scene.
The journey? Chiltern Rail to Marylebone anbd No 27 bus to Camden Lock.
Posted by Peter at 11:41 No comments:

Can't See the Wood for the Trees?
There is a discussion going on at present over whether our oldest nationalised industry - The Forestry Commission - should be dissolved and the woodlands sold to the private sector.
The last CEO of The Forestry Commission has just stated on Radio 4 that the annual cost of maintaining the national forests is £10m and the annual subsidy to private forestry owners is £36m.
I think this puts all the other arguments about access etc into the shade.
Posted by Peter at 12:28 No comments:

The Speed of X Rays
Eighteen years ago I had my hips replaced and each year I get them X-rayed so that the surgeon can review their progress. Since the surgeon was in the RAF and the hospital at Halton was closed down he left the RAF and the NHS which means that I have to obtain a copy of my X-ray for him to view. In the early days this request was often refused for all kinds of spurious reasons and even when they were forced to comply it was accompanied by comments about private patients using NHS services. Now everything is digital it only takes a few minutes to make a CD copy but here in Bucks they have created other methods to complicate the process.
After the X-ray is taken there is a form to complete which involves the ubiquitous demand for a utility bill to confirm residence. Then this form has to be taken away for someone to witness your signature and confirm how long they have known you and in what capacity. The form is then returned to the hospital. When the copy is ready it may be collected on production of photographic ID. Sometime later a bill will arrive through the post.
On Jan 7 I had my X-ray done and the form completed and witnessed on the spot.
On Jan 24 I rang the hospital to find out what was happening to be told that "there is a big pile to do. Is it urgent?"
What planet do these people live on? What do they think NHS stands for? Last time I had the X-ray done in Bath it was copied to CD whilst I waited for 10 minutes.
Surely it would be quicker and cheaper to take my money at the time of the X-ray and post it on if it could not be copied to CD immediately. It really can't take 17 days to copy a CD, can it?
From my very meagre experience it seems to me that there is defiantly room for cost savings and improvements in efficiency in the NHS.
Posted by Peter at 16:54 No comments:

My Landmark of the Week
The Bath Tower 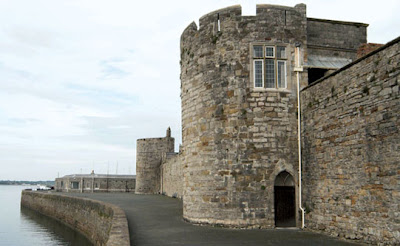 This is one of the towers of the medieval town wall, facing the Menai Strait. More recently, it was part of a Public Bath House, built in 1823 to attract tourists to the town. The present living-room was perhaps a Reading Room. Its two great windows look along the outside of the town wall in one direction, and across the Strait in the other. Here you can have your cake and eat it – the sea at your feet in front and the pleasures of an interesting town at your back.
I took some lovely pictures of the sunsets over the Menai Straits from the balcony. As with our earlier holiday at Appleton Water Tower, we took our bikes and here we could just ride them into the ground floor directly from the promenade.
Posted by Peter at 21:27 No comments:

Planned Obsolescence
I came across this concept in the 1960s reading Vance Packard's The Wast Makers and Hidden Persuaders although it had probably been around for about 30 years. 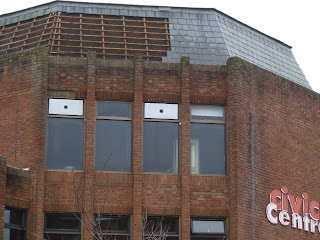 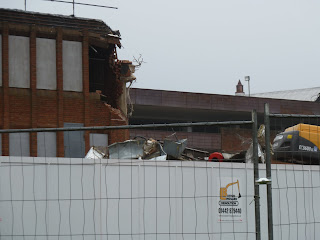 Here in Aylesbury the Civic Centre which must have been built in the 1960s is being demolished now that the shiny new Waterside Theatre is open. Many of the building of that era seem to be suffering this entirely justified fate. 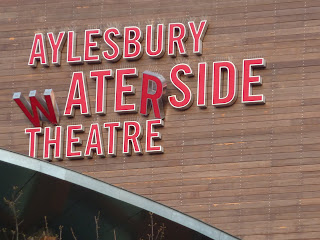 There is unlikely to be any need to demolish the Waterside Theatre as it has already started to self-destruct. 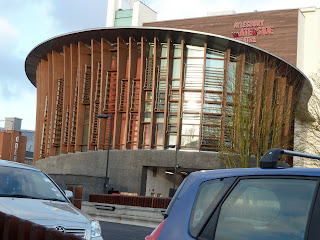 Even if this were not the case, the use of timber in external decoration is never going to last more than 18 months before it looks derelict. Why architects and planners persist in pandering to their egos rather than giving due consideration to the function or maitneance of their constructions beats me. 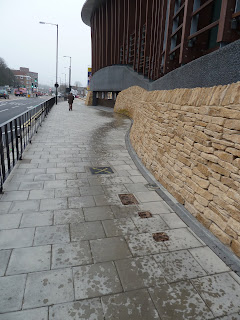 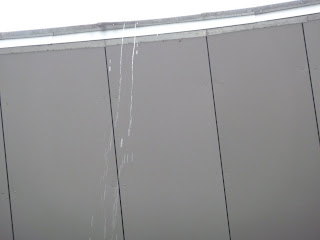 Aylesbury Vale District Council are keen to point out the building's green credentials which it does by using rainwater to flush the toilets It is strangely quiet about the rain which cascades off the roof to soak pedestrians on the pavement below. 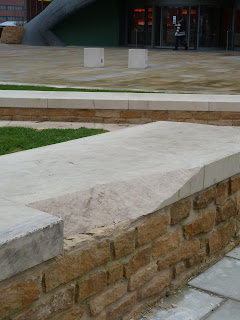 And now the coping stones in front of the theatre are falling apart. 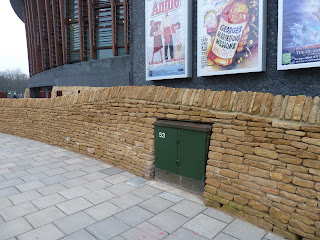 As for the "dry stone wall" - it is not dry, is the wrong stone and about ten yards of it have already been replaced. Did it crumble in the cold weather?

Apparently it is meant to represent the rolling Chiltern Hills.
Shame it is neither a local building material nor technique.
It reminds me of wartime sandbags.
Posted by Peter at 19:27 No comments:

My Landmark of the Week
Appleton Water Tower 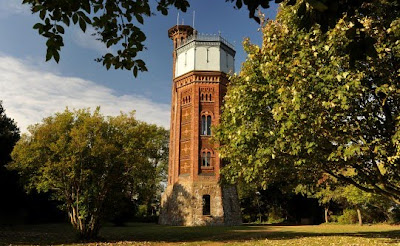 Seeing in the New Year
Where were you at midnight?
Whilst she who must be obeyed was sick in bed with 'flu I went up smoke.
The evening started in The Salisbury in St. Martin's Lane for a pre-prandial drink. 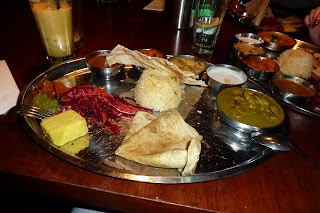 Dinner at Masala Zone was the usual success then we joined 250,000 others in trying to watch the fireworks. 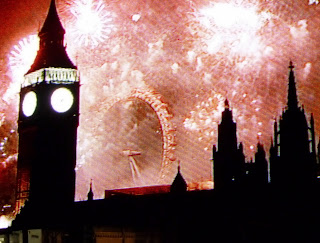 What we could see of them was quite impressive.
We ended up in Trafalgar Square, watching it on the TV screen but the atmosphere was very good despite the fountains not being available nowadays. Last time I celebrate the New Year in London, about 45 years ago, we had no fireworks but managed to have fun despite having to sleep on the floor somewhere in Regent St. Poly and then going to work in the morning.
Posted by Peter at 00:12 No comments: