The next job we need doing is an engine service so we have crept out of bustling Braunston to Willoughby, by a bridge where the engineer can park his Land Rover Defender (300,000+ miles on the clock and looking immaculate). 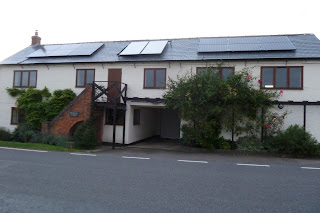 Across the canal and the road from us is what used to be the Navigation Inn on Willoughby Wharf. It is now private residences. 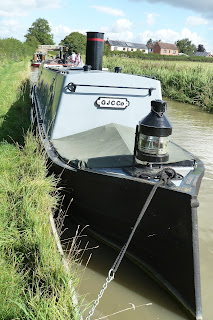 Moored behind us is Pilot

The bows look like they were designed for ice-breaking and there is a chimney on the roof big enough for a steam engine but also a rooftop exhaust pipe further aft.

It looks in good condition but I missed speaking to the owner  as he left in  a hurry soon after we arrived. 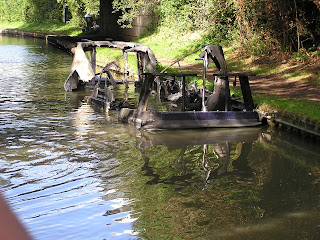 As we left Braunston this morning we passed the wreck of a Sea Otter which had been burnt out a couple of months ago but which had only sunk recently, possible due to people looting the few usable remains. The cause of the fire is unknown.

As we still have no phone signal, I had to go up to the road to arrange a service for our generator later on our route north. The electrical engineer mentioned that he had just fitted a new alternator for nb Tamora who was headed our way. We know Ian and Maureen from mooring with them in Aylesbury  so I was disappointed when I returned to Gecko to find they had passed whilst I was on the phone. 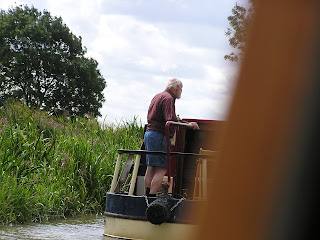 I was less disappointed to have missed Timothy West following them as I  deplore his performance on the recent TV series. He seems to relish bumping into boats and bridges and believes this is acceptable behaviour.
He missed Gecko! 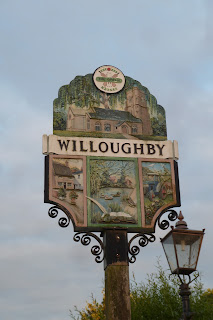 After the engine had been serviced we walked into Willoughby village.  Initial impressions were not particularly favourable but then we arrived the the old centre and changed our view. I have often said that we find something of interest wherever we moor and this is another example.
As a youngster our nearest railway was the Metropolitan Line immortalised by Sir John Betjeman as Metroland. I recall seeing the Master Cutler on its way from Marylebone to Sheffield but this ceased around 1960.  Willoughby and Braunston Station was on this line but this too has long gone, along with the 13-arched viaduct. 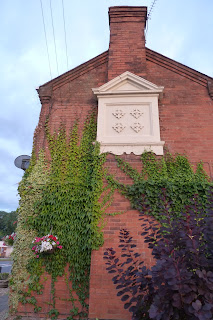 Another village pub which is no longer a hostelry is The Four Crosses. Originally this was named The Three Crosses. Leegnd has it that Jonathon Swift fell out with the landlord's wife during his stay there and engraved the following on a window with his ring.
You have three crosses on your door
Hang your wife up and you will have four

Whilst in Banbury we had a little welding job done on Gecko by Tooley's Boatyard  adjacent to the Castle Quay shopping centre. I do like the way Banbury has embraced the canal over the last 30 years, although I am not sure the plans to demolish one of the car parks  by the canal and replace it with more large shops will encourage shoppers into the town centre.
Terry Pratchett published a book some years ago which I have  not read but have always liked the title -  Thief of Time. Amongst the thieves of time I put Facebook and most TV programmes. It seems to me that a documentary on the radio which would occupy 15 minutes has to be spun out to 45 or 60 minutes on TV with repeated shots of irrelevant, and sometimes inaccurate, views. I recall being encouraged to watch an episode of a series about the canals of northern England which was illustrated with a picture of a lock on the K&A.
However, I must confess to using a smartphone to check the weather before planning the next day's cruise.  The forecast for today is wall-to-wall sunshine but rain arriving tomorrow at lunchtime. Taking this on board we decided to make today a long day to compensate for a short cruise tomorrow.
As we approached Cropredy  I was negotiating a particularly narrow corner where boats were moored both sides of the canal when an oncoming boat suddenly appeared. I drew great satisfaction from the manoevre I exercised to avoid any collision. And to make my day the helmsman on the other boat praised my boating skill. I have worked all my life in activities where brickbats are the norm and bouquets don't exist so have grown accustomed to not having achievements recognised . Now I feel like celebrating this evening with one of Graham's home brews.

Rain forecast in Banbury for 11am so we set off at 6.30.
Apart from low water levels between Grant's and Kings Sutton locks  the journey was fairly uneventful. We arrived in Banbury at 10.45 as planned ...........and the day was glorious sunshine all afternoon. No rain!

We have now spent four weeks in Thrupp during which time a new Grand-daughter arrived in Kidlington and we had four other grandkids on board , two at a time, for a week each.
Rain was forecast for around lunchtme so we filled up with water  early and set off at 7.30.
As we left Shipton on Cherwell we passed the church (more about that on another post)  behind which is the Manor. 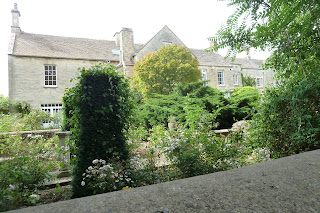 For people of my generation this is a very famous place. 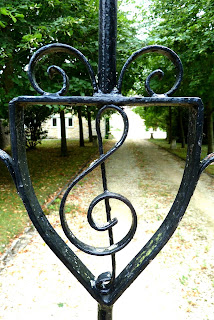 A clue to the reason is found in the front gate.


It was one of the first residential recording studios 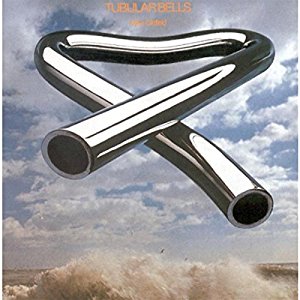 Which made Mike Oldfield and (Sir) Richard Branson famous. 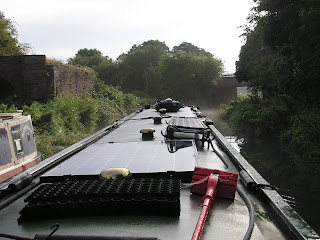 Just round the corner we passed a  derelict bridge buttress just before the current bridge.

In the foreground is the remains of the Kidlington to Blenheim railway branch which the Duke of Marlborough built in 1890.

The mainline bridge is more famous, however. In 1874, on Christmas Eve a train from London to Birkenhead derailed here and crashed down onto the frozen canal. 26 died at the scene and four more on their way to hospital. The injured, numbering over 60, were taken to the paper mill adjacent to Hampton Gay Manor where they received reluctant assistance from the  lord of the manor. I have read that the Duke of Marlborough brought some staff to assist the injured. He was certainly staying at Blenheim (about four miles away) as his son (Sir) Winston Churchill had been born on November 30.
Amongst the dead were two children who were buried in Hampton Gay churchyard without inscriptions as no one came forward to identify them.
The cause of the crash was determined by a Board of Trade enquiry. Apparently the train was very full and before it left Oxford station an extra carriage was added to the train. This proved to be in poor condition with an incompatible braking system. When a third-class passenger alerted the driver to a noisy wheel he immediately braked. This caused one carriage to crash into the one in front and push it off the bridge and into the canal. 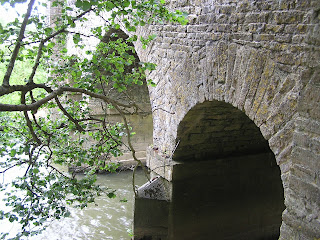 Despite the torrential rains during the previous night the river Cherwell was quite peaceful and we made good progress whilst the world appeared asleep. At Northbrook Bridge (210) we had time to take a brief look at the old pack-horse bridge which spans the adjacent Cherwell.
One surprise was that at the previous lock - Pigeons Lock - we saw two pigeons making up to each other on the telegraph wire.

Our aim was to moor just above Somerton Deep Lock before the rain came.  We were thwarted, however, as it took us an hour and a half to get throught the lock. when we arrived there were two boats above and two below. The first one up was fine but the first one down got stuck. This was not the first time we had been held up by a  Sea Otter in a lock. These aluminium boats have fenders everywhere and eventually we managed o pull most of them up and squeeze the boat out. The next boat up was a single-hander who could not manage on her own so more assistance was gien. The last one down was also a single-hander and this also got stuck on the bottom gate which was not opening fully.  With two of us pushing the gate and one pulling the bow rope this was extracted and we finally had our chance.
The rain started, of course, about 20 minutes before we tied up.