Can You Believe It?

A couple hired a boat to cruise the Grand Union Canal. they have just posted on a canal forum that because of the poor weather they have abandeoned the boat in Milton Keynes and gone home and "the hire company can do what they like". In his posting, Patrick Fallows, says that they enjoyed a few days when the sun was shining but the troubel is our weather is gettin worse. I wonder how long this fellow has lived in UK.
Posted by Peter at 08:29 No comments:

Further to my tirade against natural England et al you must read this contribution from Mike Stone, the chairman of the Grantham Canal Society.
Click here
Posted by Peter at 08:19 No comments:

I heard a rumour recently that C&RT are considering closing the Aylesbury Arm for five months over the winter in order to tackle the leakage problems. The leakage problems are not new: most of the sixteen locks have notices on them instructing boaters to empty them after use because the walls leak.  As anyone with a swimming pool will tell you, such structures are less sound when empty. Winter is not the most conducive weather for canal maintenance but stoppages in summer inconvenience boaters.  So why didn;'t C&RT carry out maintenance on the arm last year when it was closed for eight months over the summer?
Posted by Peter at 17:06 No comments:


Two years ago the whole world was impressed by the opening ceremony of the 2012 London Olympics.  A key element of this spectacular was a celebration  of the Industrial Revolution. 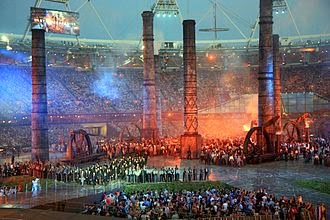 If Natural England, The Health and Safety Executive and English Heritage had existed 250 years ago there would never have been an Industrial Revolution: Britain would still be in the dark ages.
Once again ecologists in the form of Natural England are demanding that canals should not be used by canal boats. This time they want to close the Ashby Canal to boats because they damage the ecology. Don't these dunderheads  understand the word Natural?  Canals are man-made for the use of boats. By definition they are not the natural habitat of anything. Restoration work on the Montgommery Canal has been delayed by 20 years to meet the demands of Natural England for the creation of wetlands  which were never there before the canal was built.
When we were on the Ashby Canal earlier this year we saw water-voles, a grass snake and many other small creatures.  The area is rich in flora and fauna which survive quite readily with other canal users such as boats and anglers.  Wild animals and plants are much more adaptable than Natural England gives them credit for. If they really need to stop some development then why not put their efforts into stopping the ridiculous HS2 from London to Birmingham. Alternatively, how about doing something positive for a change? They could start by eradicating Japanese Knot weed, Himalayan Balsam and the red-clawed crayfish which are killing off the native species.

We have been hanging about the Foxton area for a while: waiting for a cousin from S. Africa to arrive and for other members of the family to join us.  A good opportunity to update the blog but I lost track of the photos I wanted to use so nothing got done.
All family and friends have departed and I have found the pictures, safely archived.
Last year The Landmark Trust won the RIBA Stirling  Prize for its bold and imaginative restoration of Astley Castle
I was reminded of this as we passed through Nuneaton recently because a few years ago, before the Trust had started work on it, we walked up from the canal to take a look at Astley.  I remember it was a very hot day and the walk seemed to be all uphill.  I recall also seeing a rag and bone man for the first time in decades. If you are in the area a visit to the church which is next to Astley Castle is very rewarding.
We recently spent a few nights at Hillmorton, taking the bus into Rugby a couple of times. The Church of St John the Baptist is not far from the canal on a knoll in what was once a boggy moor - hence the derivation - Hill-moor-town . There has been a church here since the 12th century. Although nothing of the original structure exists some of the stones were used in the rebuilding of 1240.  It was first endowed by the Astley family. (of Astley Castle). 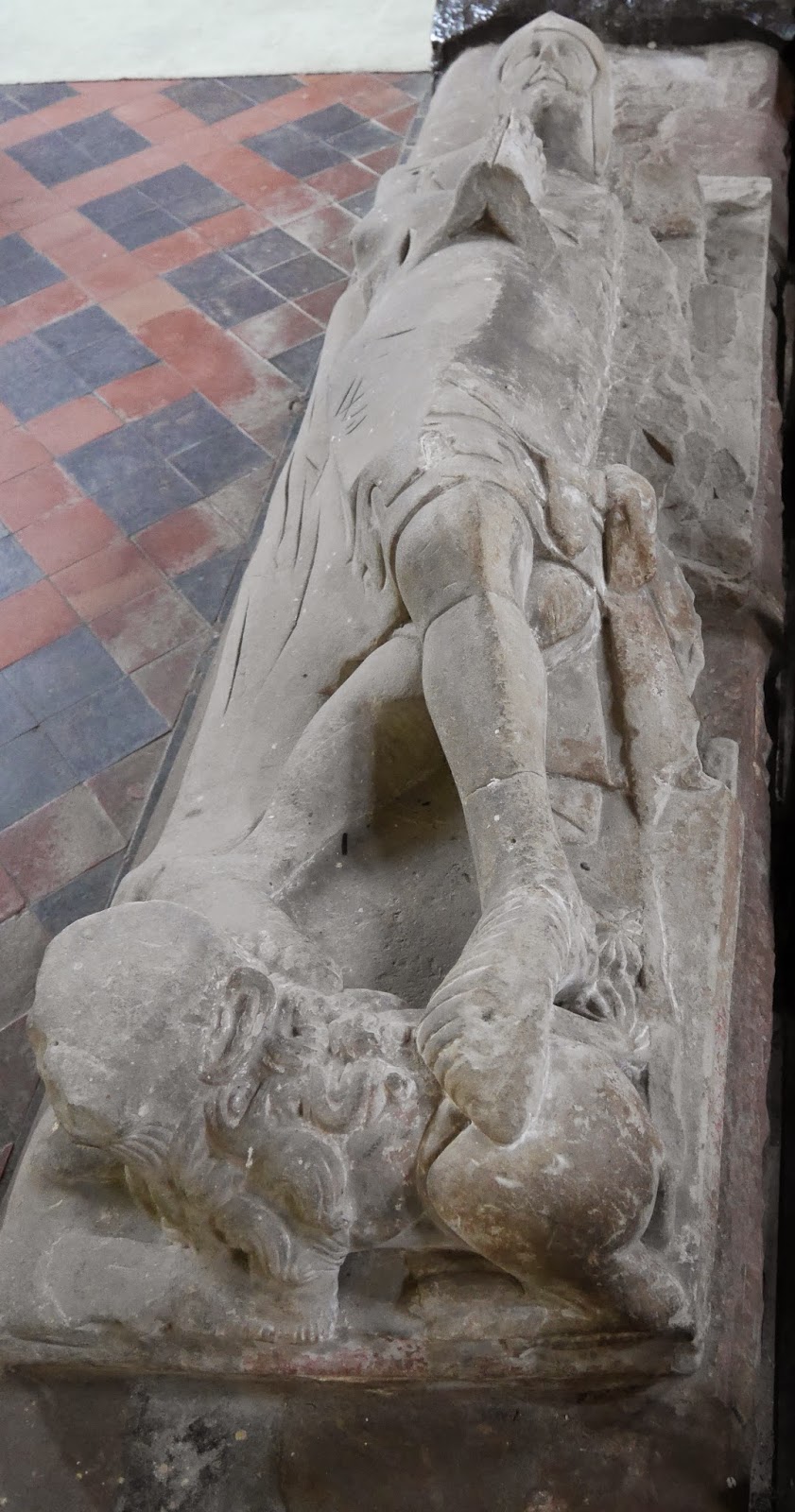 There are two stone effigies in the south aisle: one is thought to be Sir Thomas de Astley who died along with Simon de Montford in 1265 at the battle of Evesham .

It  was severely cut when the box pews were installed in ther 1770s and probably suffered some damage during the civil war. Roundheads did not care for 'graven images' and sometimes sharpened their swords on such things. 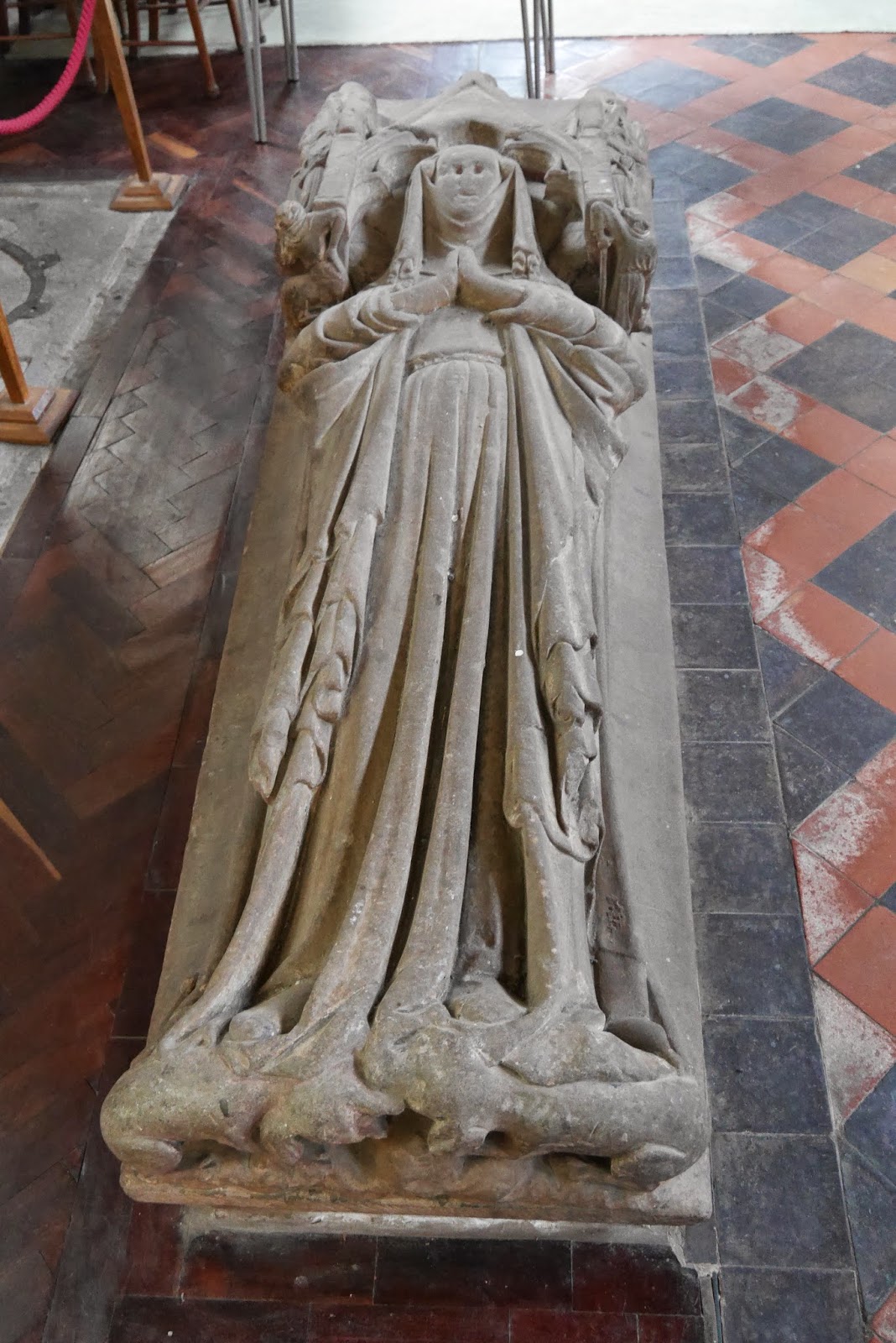 The other forms the lid to the tomb set into the floor of Edith, Sir Thomas's second wife.   Her maiden name was Constable and her family came from Norfolk.
There are traces of colour in the folds of the gown, although my photograph does not show it, which indicates that this effigy was highly decorated. This may have been the case also with her husband's effigy. 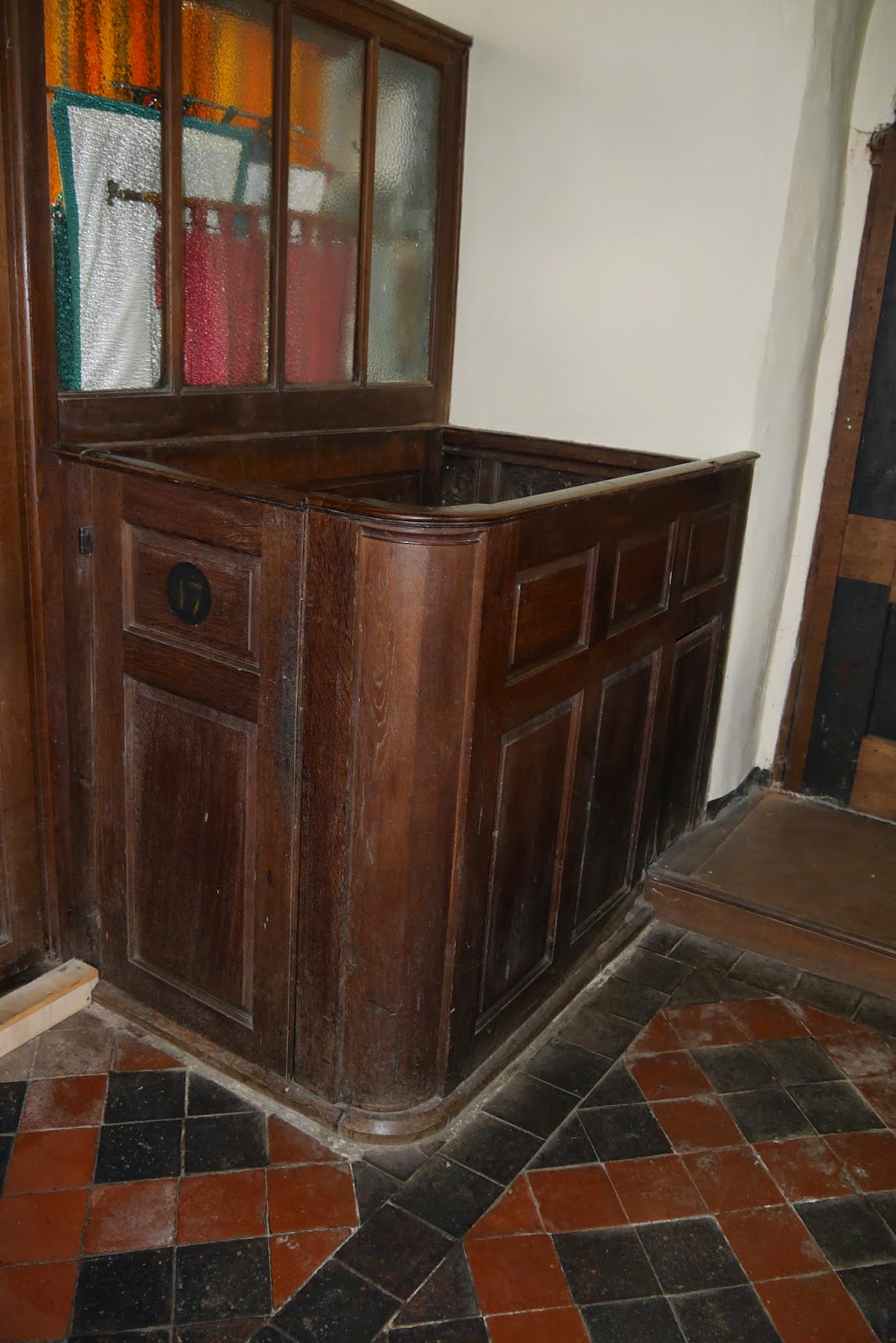 There is still one complete box pew, number 17. In an unheated church these must have provided some protection from the winter draught.

This was made from Norwegian oak with a narrow deal seat.

Many of them lost their doors over the years, possibly when the seats were enlarged to make them  more comfortable. 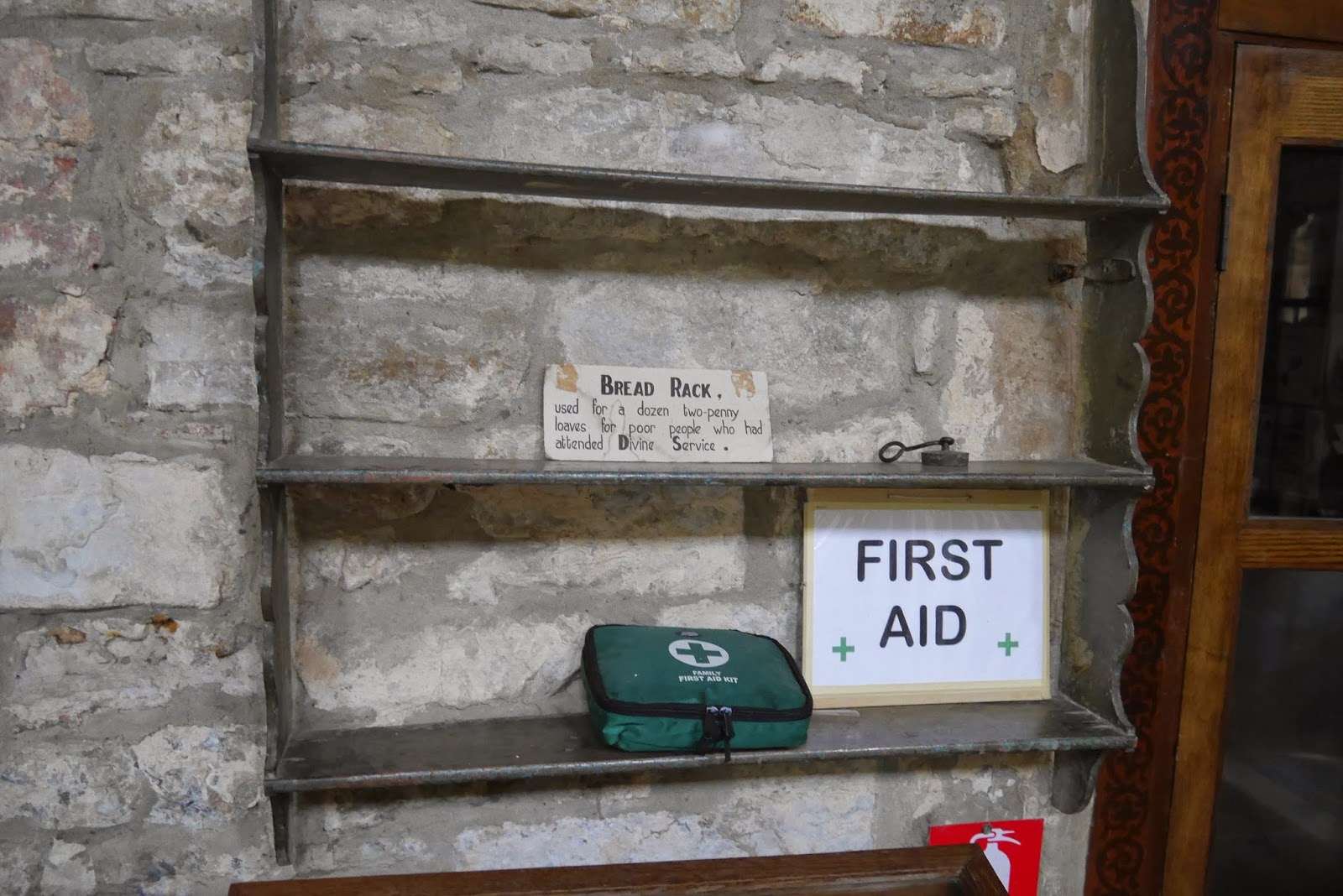 There are many charity boards around the church.

Just inside the door are these shelves upon which were placed twelve tuppenny loaves each week. At the end of divine worship these were distributed to those poor parishioners who had attended church or were prevented by sickness from attending as deemed appropriate by the vicar and churchwardens.

There has been much chatter recently on the cut about the difficulty of understanding some of the signs C&RT have and also how poorly kept the hedges are.
We try very hard to comply with the regulations as designated but we have had a  few problems recently. 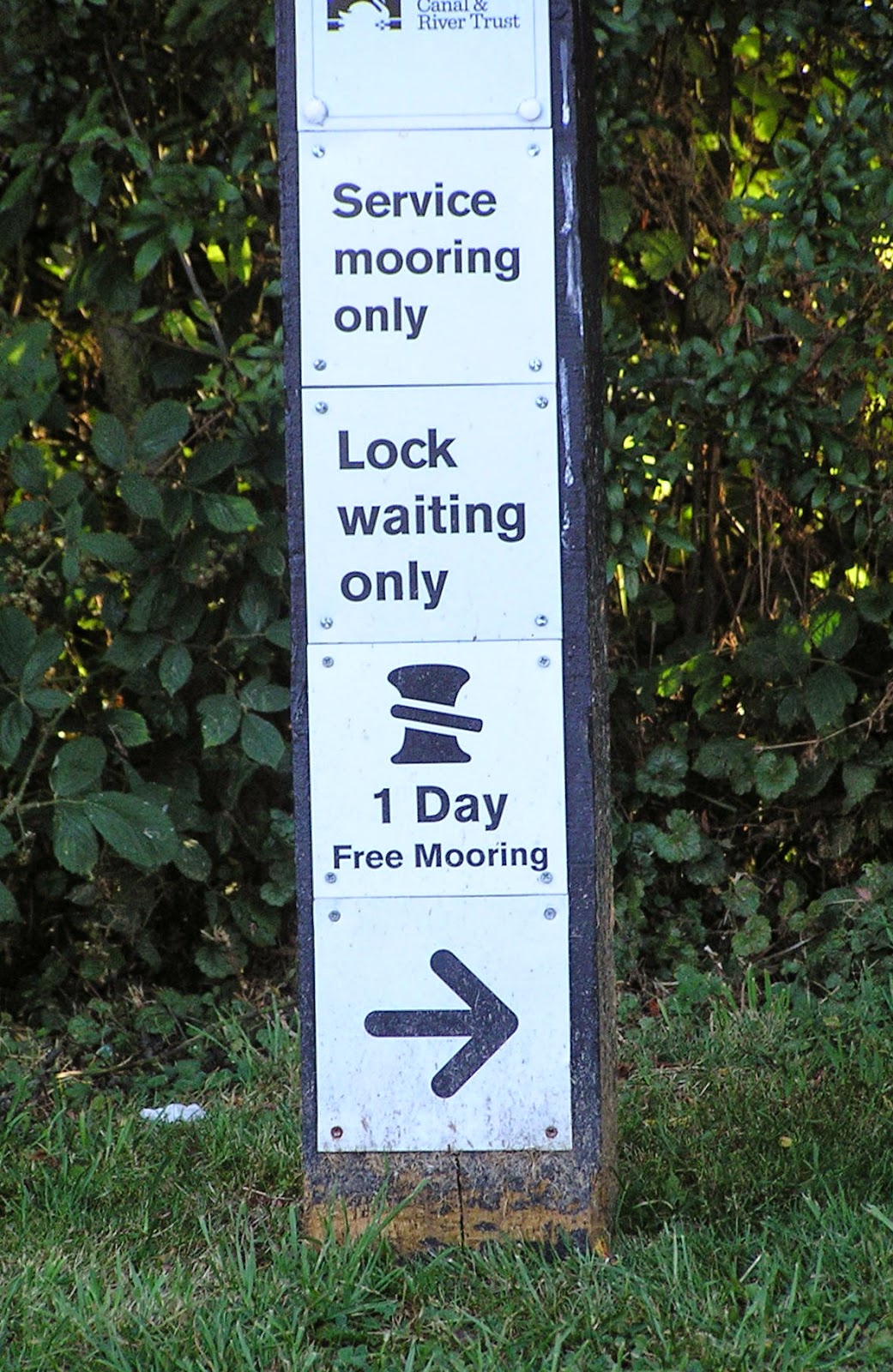 What does this sign mean at the bottom of Foxton locks?

Is it for the water point?

Or waiting to ascend the Foxton staircase?

Or 24hrs waiting for any reason? 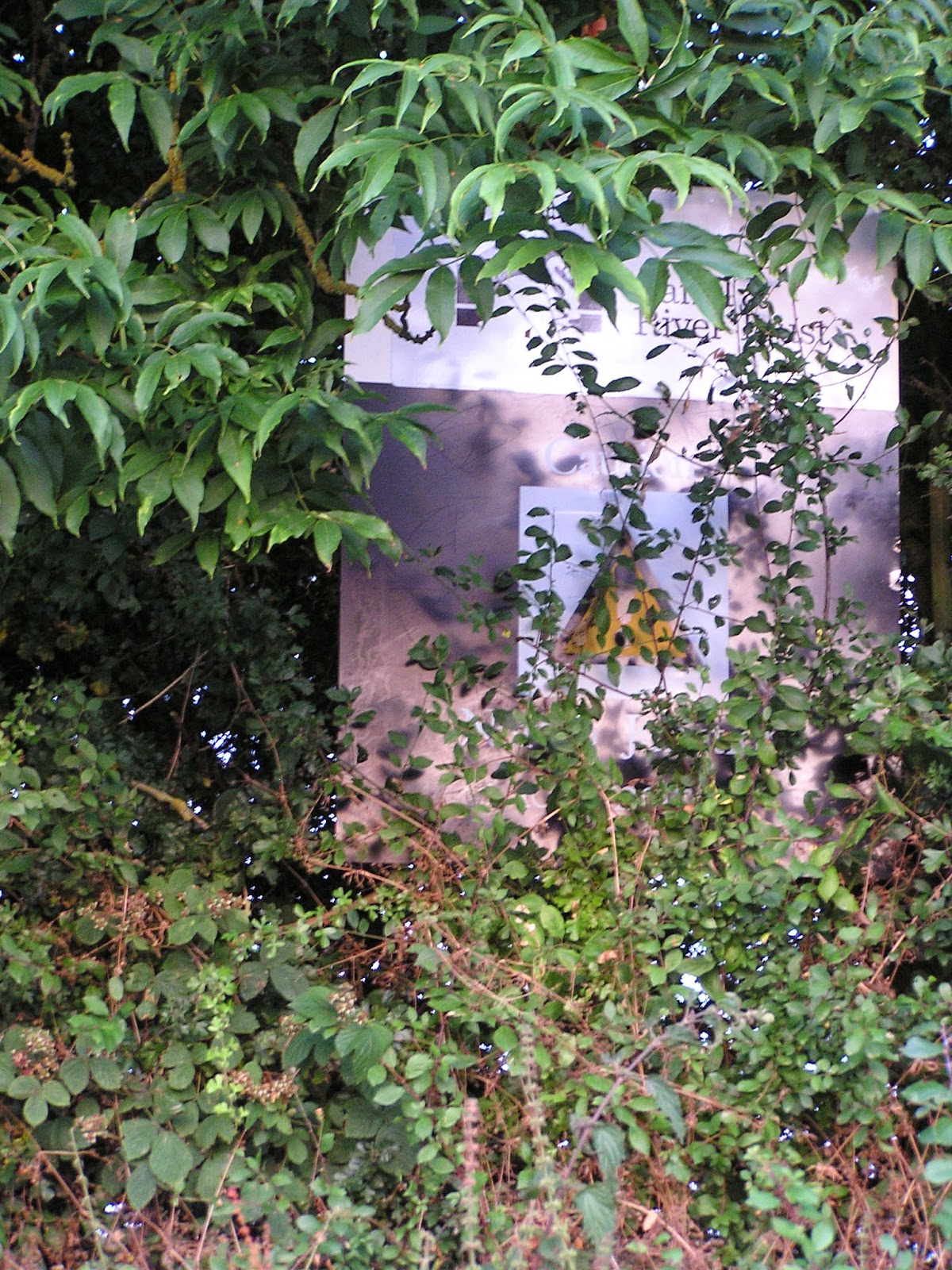 A t Norton  Jct we were ready to comply if only we knew what they wanted us to do or not do.