H & S on S & W
The Staffs & Worcs Canal is my favourite English inland waterway. I am not sure what makes it more  attractive to me than all the others:t part of the reason must be the feeling that in parts the canal has not changed since the days of its commercial life.  Like all the canals in England, it was built for working boat manned by working men and women and, like all these canals, it is now only used for leisure purposes. One consequence of this change in users is that the original features and structures were not subjected to 21st century health & Safety risk assessment. 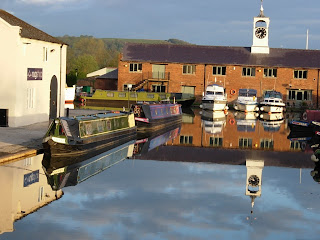 Stourport, where the canal joins the River Severn always reminds me of the kind of layout one might design for a model: it has broad locks, narrow locks, staircases locks, a dry dock, a boat buildeer, chandlery, several basins and all watched over by a clock tower. 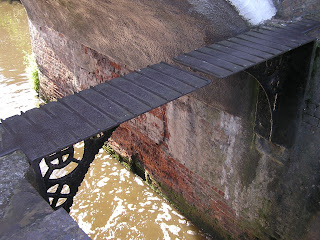 Some of the quaintest features like this footbridge at The Bratch flight of locks would never pass the design stage nowadays.


Last June a young lad tragically died in Stourport cycling across an unsuitable bridge across the staircase locks. The inquest in December 2011 heard that there were signs at Stourport Basin banning cycling, and the edge of the lock and the side of the bridge's parapet were clearly marked. Worcestershire coroner, Geraint Williams, dismissed the need for specific warning signs because some things were 'inherently dangerous'. A verdict of accidental death was recorded.


The response of British Waterways has been to erect scaffolding frames around such bridges as a 'temporary 'Health and Safety measure.
This is another illustration of how out of touch BW is with the practicalities of boating on their canals.
At the following site John Slee of NABO explains in some detail the irresponsibility of this structure.

In my youth when I could buy a dozen bottles of Guinness for £1 there was a legendary Indian Pale Ale which aficionados could be seen supping in a corner of the snug. Worthington White Shield is a live beer - it ferments in the bottle and - so throws a sediment as a good wine does.
The serving of this bottle-conditioned ale always prompted a discussion in the bar -do you pour the dregs or not?
Until recently I was under the impression that  White Shield had been discontinued in 1997.  This is partly right: public pressure forced Molson Coors who now own the brand to rethink their plans.  So this beer which was introduced by William Worthington in 1829 is still available albeit behind a more modern label.  It is still brewed in Burton-on-Trent now in a dedicated micro-brewery. Currently Tesco  is offering 4 bottles of beer for £6 and this deal includes Worthington White Shield which is now priced at £2.15/bottle.  If you enjoy ale and have never tried it, buy a few bottles and put them away for a year or two. In 1901 King Edward VII awarded the Roayal Warrant to Worthington so perhaps this is a good year to lay down some royal ale.
Posted by Peter at 13:27 No comments:

Which Way is DOWN?

Special offer at Morrisons: a ten pence increase in price! 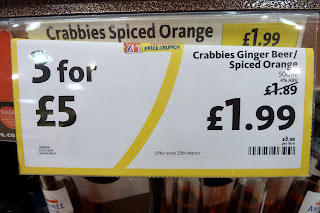 Which Way is UP?

The lift (US: Elevator)  in Marks & Spencer stores always lists the current floor at the top which for my simple brain is confusing: I expect to see Basement at the bottom with Ground,  First etc above in order of arrival. 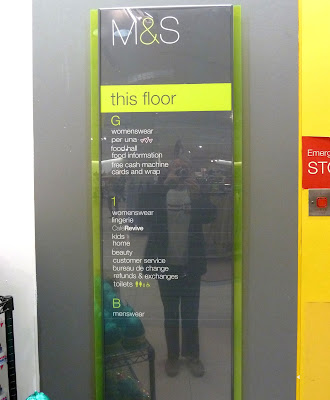