Thames Boathouses
It is a week since we embarked on the K&A expedition by leaving the Oxford Canal via Isis Lock into the River Thames. At the first Thames lock we have to buy a licence because our BW one does not cover the river. If we buy a one-day licence at £33 we get a second day free - Tesco marketing comes to the Thames! This raises a challenge - can we get to Reading where the K&A starts in two days? 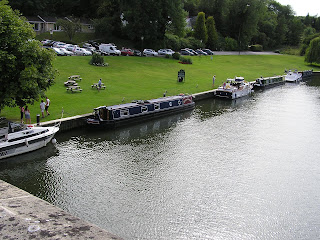 The weather was glorious and we  made it to Shillingford where we moored  on the lawn of Shillingford Bridge Hotel. A lovely location with use of the outside swimming pool and lawns. A well deserved rest was taken after we had recovered from paying the mooring fee of £20. Apparently this is twice last year's price.
The next day we reached Reading and so achieved our goal so the mooring fee was deemed worth it. 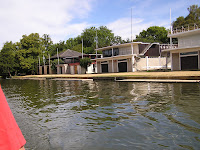 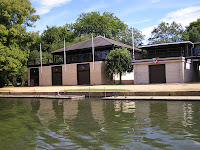 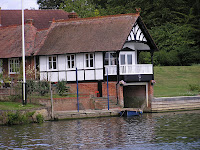 This is the first time Gecko has ventured south from Oxford on the Thames but we enjoyed it, especially the unusual buildings, including boathouses which are rare on the canals we usually inhabit. 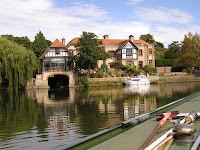 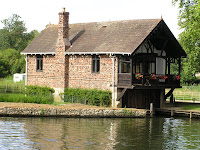 Return of the Blog
July has been such a hectic time with visitors from Australia and our grandson (nearly four years old) staying with us for a week and attending a wedding in Germany and cleaning the house in Bath ready for new guests and driving down to Canvey Island for a family visit and another family event in Bucks and so on and so forth.......
We are now on the Thames heading south from Oxford for the first time.  Our aim is to join the Kennet & Avon Canal at Reading and thence to Bath (another first for Gecko).  After a glorious day of cruising we are moored on the lawns of Shillingford Bridge Hotel.  A bit of a shock as they charged us £20 for the pleasure (up from £10 last year apparently) . That means it's Lidl and Aldi for the foreseeable future. I wish now I had not subdued my desire to grab a bagful of broad beans from those fields near Pigeon Lock last week.
Posted by Peter at 19:44 No comments:


Roundheads and Cavaliers
During the civil war, Oxfordshire was predominantly Parliamentarian in sympathy. In Oxford itself, however, there was a split between Town and Gown with the university supporting Charles I and the residents supporting Cromwell.
On our bus journey to Kidlington last Sunday we passed through Dedington which we thought merited further investigation so the next day the sun was shining again and back we went. 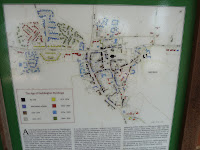 In the centre of the village is a market hall opposite the small green.. And in the market hall are maps of the area showing ownership of land and the age of properties - like an open-air museum exhibit.  As the we had to catch the return bus from here we found this very convenient. There is considerable evidence of an active and involved social community. 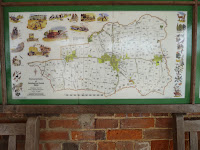 Whether the congregation size warrants the massive church of St. Peter & St. Paul I cannot say.   In 1634 the original bell tower collapsed into the church and was not repaired for quite some time.  On the eve of the Battle of Cropredy Bridge in 1644 Charles I stayed in Dedington and not missing an opportunity, he had the bells sent to New College in Oxford to be made into cannon balls. I don't suppose that pleased the locals. 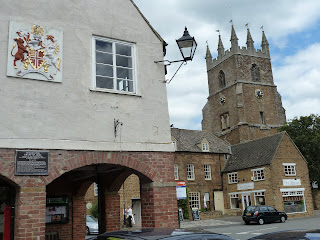 The tower was rebuilt with statues of St. Peter and St. Paul in one side and for some reason eight weather veins on the top.


Church towers collapsing were not confined to Dedington. 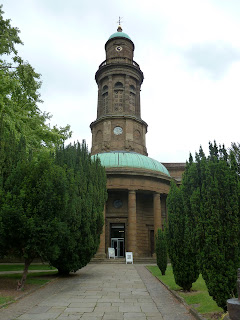 The Victorian church of St. Mary in Banbury suffered the same fate and the six bells all cast at Bagley's in Chacombe (pronounced Chaycum by our local friend Julian) were eventually recast as a peel of ten and rehung in 1930. This is an unusual church in that it was built square and originally seated 3000.  It is now shared by the Anglicans and the Congregationalists and I doubt their services attract such support.. 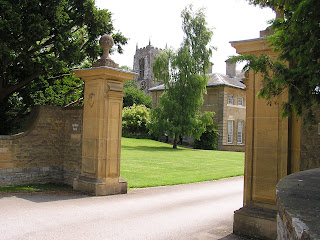 Just down the Oxford Canal, Aynho, like nearby Banbury, was staunchly parliamentarian but the Cartwright family who occupied Aynho Park were recusants. When the Roundheads arrived in Aynho they sacked the church and manor house despite the local loyalties. No-one seems able to explain why the clock faces on this church tower are not central. 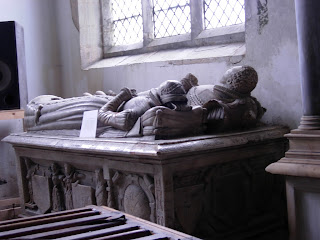 The story at Somerton was similar.  Here the Fermor family worshiped in their private  Roman Catholic chapel but supported the local Anglican church. The south aisle of the church was established as a chapel to house the tombs of the Fermor family: a practice which continued even after the family had moved away to Tusmore
Posted by Peter at 12:06 No comments: