An Illustration of C&RT's Attitude

Everyone has their own preferred statistics and C&RT seems to use different ones to support different points.  However, whichever figures are used it is accepted by all parties concerned that something around 95% of all visits to canals are carried out by people who make no direct financial contribution to the maintenance of the waterways system eg; walkers, joggers, cyclists etc.
Current spending by C&RT on waterways maintenance is about £80m/year. Current contribution by boaters and anglers (the only people who do contribute) is about £35m.   Any survey of visitors to the canals confirms that they want to see boats - not just water. But somehow C&RT has calculated (they don't say how) that boaters do not pay their way. 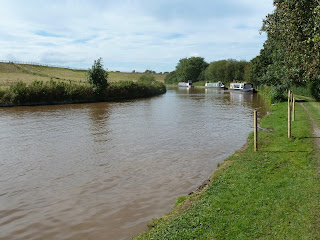 This is  Hurleston junction on the Shropshire Union Canal taken last summer.
Notice the collapsed bank with posts to keep pedestrians safe?
We passed this today.  The posts are gone; the reeds are gone; the path is now broad, level and gravelled; the bank is smooth concrete.
That's all good, isn't it?
Not if you are a boater.
We are allowed to moor here for 48 hours but the new concrete bank has no provision for mooring: no rings, no bollards, no piling - just a nice new footpath for us to hammer stakes into. I was too busy to take a photograph of the new bank but where on C&RT's list does this indicate boaters reside? We are not even on the list, are we?
I believe that the more widely the access to canals the better for all.  Early morning dog  walkers and joggers, commuting cyclists, anglers, weekend mountain bikers, mid-morning pushchairs and Sunday family strollers all bring something to the waterways and they should be encouraged by continuous improvement of facilities.  But let's get things in perspective. The latest licence figures from C&RT show that the number of boats has fallen in the last year from 35,000 to 33,000 and I can hazard a guess why.  My unscientific observation over the past three years is that there are fewer boats travelling, more boats for sale and many more staying put. When we pass a hire base full of boats in the middle of the school holiday it makes you wonder why. It is becoming too expensive, difficult and sometimes downright dangerous.  And what are C&RT doing?  Carving poems on lock beams and paying qualified surveyors to measure lcok ladders.
Posted by Peter at 15:49