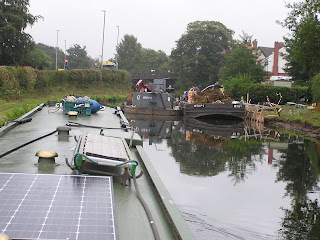 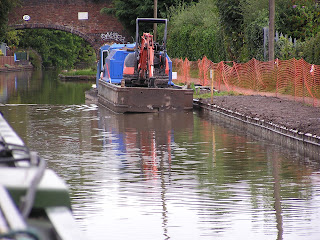 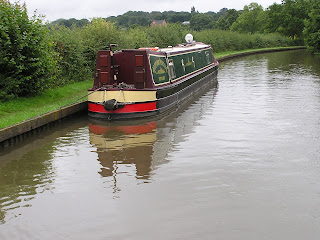 Several of our friends have sold their boats in the last few years and we were commenting to Ali & Elaine on Ellie Mae last night at dinner that we had not seen any of these boats around with their new owners, except Hampshire Rose
So we were pleased this morning when we passed the sister boat - Autumn Venture which had previously belonged to Jeanette & Nigel until his untimely death.

We have always encountered a queue at the Atherstone Locks (11) so were surprised to find no boats but three volunteers to assist us on the top two locks.  There were very few boats during our passage which afforded us time to pick the golden plums on the off-side near lock ten. These will follow on nicely from the blackberries we picked in Hillmorton and the gooseberries from Maggi's freezer clearout which came to us in Hillmorton courtesy of some German visitors.

After refueling at Alvecote we pushed on to Fazeley as we need some time here to get the mattress replaced. 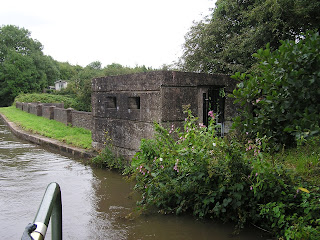 On the aqueduct over the River Tamar (not that one!) we discovered this pillbox which we must have passed on numerous occasions but not noticed.
Another for the collection

Using the weather forecast again we decided to make a long day cruising  but could not set off until we had returned the hire car we had used over the weekend. We had moored at Hillmorton because we knew where we could leave Gecko for a few days whilst we fulfilled some commitments   up in Lancashire. When we set off we soon passed through Brownsover where we have moored many times in the past. This location is very popular, partly because of the proximity to a large Tesco store.  However, the moorings are not good and the narrow channel with boats moored both sides some boaters find difficult to negotiate. But today we found  about 100 yards of new mooring rings.
The water point has been moved but fortunately we will be ok for a while. 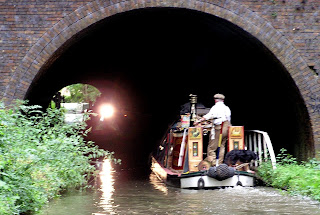 Last time we passed through Newbold Tunnel it was illuminated with coloured lights. I never discovered the reason and now they are gone. Only 250 yards long and two-way, it is not much more than a long bridge.
When the Oxford canal was built it provided a route from Birmingham to London via the River Thames  from Oxford. The construction of the broader and straighter Grand Junction canal cut journey times between the two cities jeopardised its survival.
In response to this threat the Oxford Canal Company undertook a programme of straightening their canal. Cutting Newbold Tunnel was part of that programme. 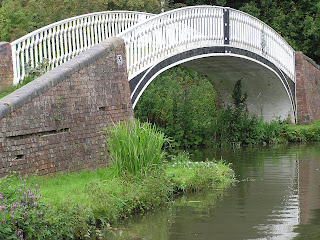 They also dug cuttings to eliminate the original twists and turns as evidenced by many bridges like this across the resulting  redundant loops. 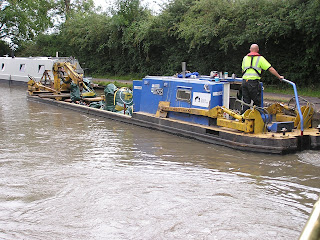 Throughout our cruise today we have encountered contractors and C&RT teams working on bank improvement. 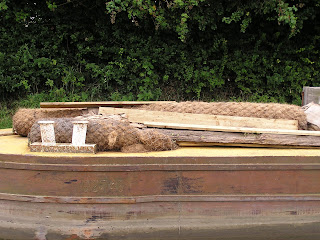 These coir rolls are the current method of  planting vegetation.

I guess this balances out the mooring improvements in Rugby. 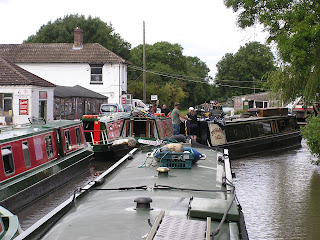 It always takes a time to get  through Rose Narrowboats, with their swing bridge linking the site.

But today the passage is even more involved than usual. 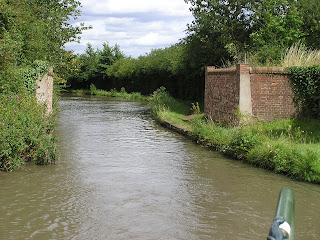 At Ansty  bridge 15 which had been looking very precarious for many years has now had the span removed leaving just the abutments.

The U-turn at Sutton Stop where we joined the Coventry Canal was executed expertly as you would expect. 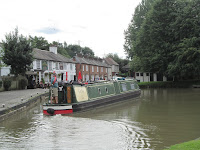 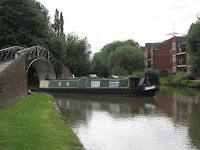 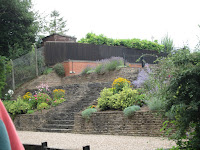 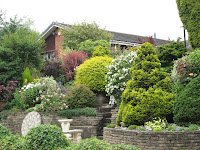 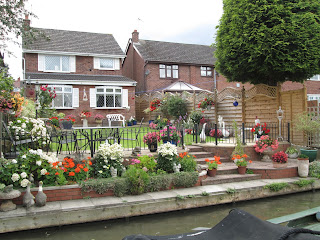