The sixteen locks at Marple have some odd characteristics: one is that you cannot operate the bottom gates without descending to a special bridge or, in this case, the road to a group of houses.As we set off at 8.30 this morning we probably made one or two local residents late for work. 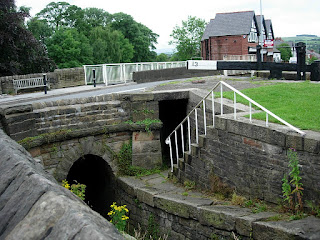 There also seems to be a fetish for tunnels.

Here the higher tunnel gives access to the canal at the lock tail for boaters to board or alight.  The lower tunnel passes under the road to join the canal beyond the bridge. 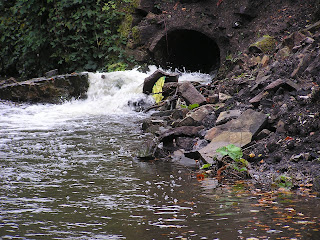 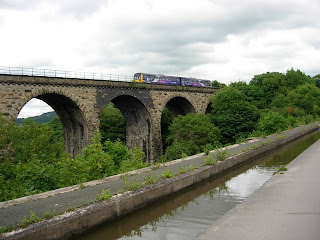 Our progress was slow due to the poor condition of the lock mechanism and features such as this collapsed bank.


After negotiating six locks two volunteers arrived and worked us down the remaining locks saving us at least an hour.


Rob & Lee are half-way through a six-week placement and hope to get jobs on the canals next year.


Immediately after desceding the locks we crossed Marple Acqueduct which is accompanied across the valley by the rail viaduct.


Soom after this the rain came and the canal became so shallow that we we continually hitting submerged stones.  At one point the prop jammed between some rocks and we came to a sudden stop.