St. George is the patron saint of England (and many other countries, apparently) and this is the flag we use in England to represent him. Those Englishmen who remember him do so particularly on April 23.  That's today!
The legend of St. George and the dragon seems to have arrived in England from the Crusades but appears in many countries, cultures and religions.  He is unusual in being venerated by Christians of all denominations and also Muslims and Jews.
Although the location and the other parties involved vary from one story to another the gist is this:
A village relies for its water supply on a pool or stream which is guarded by a dragon.  To appease the dragon each day it is offered a sacrifice. Initially this is a lamb but later its taste turns to maidens.  Selection of the maiden is made by drawing lots and all goes swingingly until the King's daughter draws the short straw.  The King pleads for his daughter to be spared but to no avail: his subjects are particularly egalitarian. However, just at the crucial moment, who wanders by on his travels but George?  He sees the maiden in distress (whether he knows she is a princess is not recorded) and, protecting himself with a cross, he slays the dragon.   So being a king does carry some benefits when it comes to dragons. 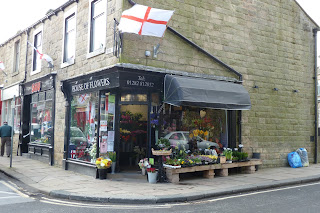 Celebration of England's patron saint is less fervent than those of Scotland, Wales and Ireland which I attribute to the natural reserve of the English.

But The House of Flowers in Barnoldswick has gone to town with its window display which includes a dragon with red flashing eyes. 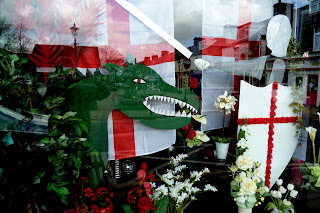