Queen, Queen Caroline,
Washed her hair in turpentine,
Turpentine made it shine,
Queen, Queen Caroline.
This skipping rhyme was unknown to me until two days ago: my experience never progressed beyond...
The wind, the wind, the wind blows high.
The rain comes scattering from the sky....
which had no political references as far as I know.
This gap in my education was prompted by my photograph of The Queen's Head pub in Wolverley.  The pub sign clearly depicts Queen Caroline rather than the more common (not quite the word) Queen Victoria.
Caroline of Brunswick, about whom this rhyme is reputed to have been written, was married to King George IV.  Contemporary reports describe her as fat, ugly, tactless and never changed her undergarments.  She did have one quality which attracted her to the then Prince of Wales: she had money.  This was particularly attractive as the prince was in debt to the sum of £630k.  Two hundred years ago that even exceeded bankers' bonuses.That amount of dosh was even more overwhelming than her body odour. After their first meeting the Prince demanded a glass of brandy! He drank brandy for the next three days until the wedding and was so drunk on his wedding night that he collapsed in front of the fire and slept there all night.  Nine months later they had a child so he must have done his duty at some time.  The prince refused to live with Caroline and she  moved to Blackheath and later to Naples where her behaviour became bizarre to say the least.  On the King's death and her husband's accession she returned to England to attend the coronation but the door of Westminster Abbey  was slammed in her face.  She died about three weeks later and was buried in Brunswick. 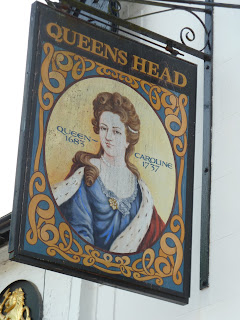 However, none of this is really of interest to us because the pub sign depicts an earlier Queen Caroline - Caroline of Ansbach, who married George II.This Caroline was a different kettle of fish: she had eight children and was very involved in politics.  As Princess of Wales  she joined her husband in stirring up trouble for his father, George I, and became great buddies with Sir Robert Walpole, the rebel Whig. She was also reputed to be very attractive and well educated.
When her husband became King her political influence with Walpole was immense and during  the king's trips to Germany the law was changed to appoint her as regent rather than their eldest son who was rather feckless.  She was intellectually  superior to her husband and engaged in correspondence with luminaries of arts and science.  She even had her children innoculated against smallpox which drew commedation from Voltaire thus:
"I must say that despite all her titles and crowns, this princess was born to encourage the arts and the well-being of mankind; even on the throne she is a benevolent philosopher; and she has never lost an opportunity to learn or to manifest her generosity."
After a long and happy married lifeshe died in considerable pain she died on 20 November 1737 at St. James's Palace. She was buried in Westminster Abbey on 17 December. Frederick was not invited to the funeral. George Frideric Handel composed an anthem for the occasion, The Ways of Zion Do Mourn / Funeral Anthem for Queen Caroline. The King arranged for a pair of matching coffins with removable sides, so that when he followed her to the grave (23 years later), they could lie together again.

So what is this thing about washing hair in turpentine?  I really don't know. However I did come across this reference in the Diary of Samuel Pepyes
17 July 1664
.....and by and by comes my uncle Wight, Dr. Burnett, and another gentleman, and talked and drank, and the Doctor showed me the manner of eating,turpentine which pleases me well, for it is with great ease. So they being gone, I to supper and to bed.
Apparrently eating turpentine give one's urine the odour of violets.  However, according to  a 19th century dispensary report.....
... The oil is a diffusive and exciting stimulant, arousing the stomach and circulation, strongly influencing the kidneys, and presently being absorbed so as to mark the exhalations of the lungs and skin with its peculiar odor. It also gives to the urine the odor of violets. Any considerable dose, or small doses continued for a number of days, may occasion burning of the stomach, scalding urine, strangury, irritation of the kidneys and bladder, painful looseness of the bowels, and even bloody urine.
So perhaps turpentine might make hair smell sweet too. I think I'll stick to cleaning my paint brushes with it.
Posted by Peter at 11:30