Not All Bad at Merry Hill

The shopping centre here at Merry Hill is vast: the car park capacity is 8000.
When we ventured in yesterday we stopped at the first junction to get our bearings and a young couple approached us looking for an exit - any exit!
We are made of sterner stuff and returned today without topee or assegai. 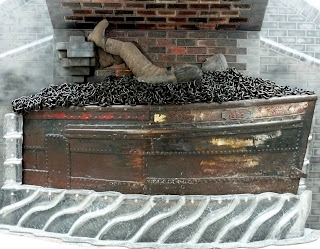 Tucked away in one of the cul-de-sacs we encountered this sculpture of a man legging a boat full of locally made chains. 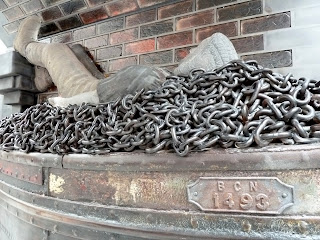 From the BCN Guaging Plate number 1493 I have been able to trace the original boat details.  It belonged to the LMS (London, Midland & Scottish) Railway and was a Station Interchange Class open day-boat named Tom. That is, it had no cabin or motor and was used to carry goods to and from the LMS rail interchanges.
Tom was built by W.J. Yarwood at Northwich on the R. Weaver and launched on 4th August 1929
When the railways were nationalised  in 1948 the canal fleets were transferred to British Railways: When BR withdrew from canal carrying six years later it was sold to British Waterways Board for £50.  Its current whereabouts is unknown.Built in riveted iron it measured 70ft long x 7ft wide with 3ft6ins sides. 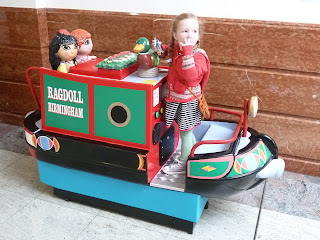 I have been less successful in tracing the origin of the other canal exhibit in that location.
Posted by Peter at 22:00