Firstly l must address the question of whether the correct word for the title is AWAY or AWEIGH.
The call anchor's aweigh was made by seamen to indicate that the weight of the anchor was being borne by the chains or warp: it did not indicate that the anchor was away, ie:  not here.  Seamen were inclined to prefix words with a letter a:  for instance, ashore, astern, atop.

Secondly my research into Black Country anchor making led me to a detailed description of the process by which the main anchor for Titanic was made in the Black Country Bugle.  I will reproduce it below.  It interested me because I had heard claims that Walter Somers of Halesowen  had made this anchor.  Reading this article shows that it was not that simple: Although  Hingley were the main contractor for the work they actually outsourced some processes and indeed  Somers did contribute. It could not be said that Somers made the whole anchor. 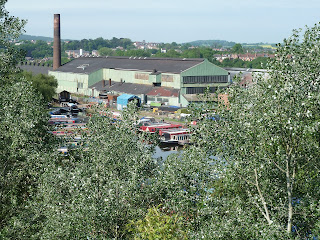 Walter Somers Ltd occupied the site of this large works alongside Hawne Basin where we are currently moored.

They came to the public's notice again around 1990 when they contributed to another project to produce very large castings: they forged parts for the supergun that Sheffield Forgemasters were manufacturing for Iraq.

The company is no more
Posted by Peter at 10:06