Last night we travelled south of the river for the best Chinese food and company we have experienced for a long time.  We were visiting friends of ours who live near the new railway station of Mitcham Eastfields. In order to insert this station into the existing railway corridor the two platforms are not constructed opposite each other which is a little disconcerting on your first arrival as the other platform passes the window at quite a pace creating the worry that the train is not stopping. There is also a road crossing with gates between the two platforms with a roundabout very close to the railway.  This must be a nightmare when traffic is queueing at the time a train is due.
This morning we set off around 8am to make our way back to Padding ton Basin.  On Friday when we made the journey down to Limehouse we were assisted by Dave the Rave: no such assistance today, hence the early start.
You may not remember Henry I's wife, Queen Maud, but I hope you remember what happened to her here at Old Ford.  When I arrived here the right-hand lock was full and so I was directed into the empty left-hand lock.  After some time during which the topside activity produced no movement relevant to our passage through the lock, I was directed to exit said lock and enter the now empty  lock next door. This one is electrically operated and takes a long time to do anything.  The left-hand one is out of action and takes even longer to do nothing at all. 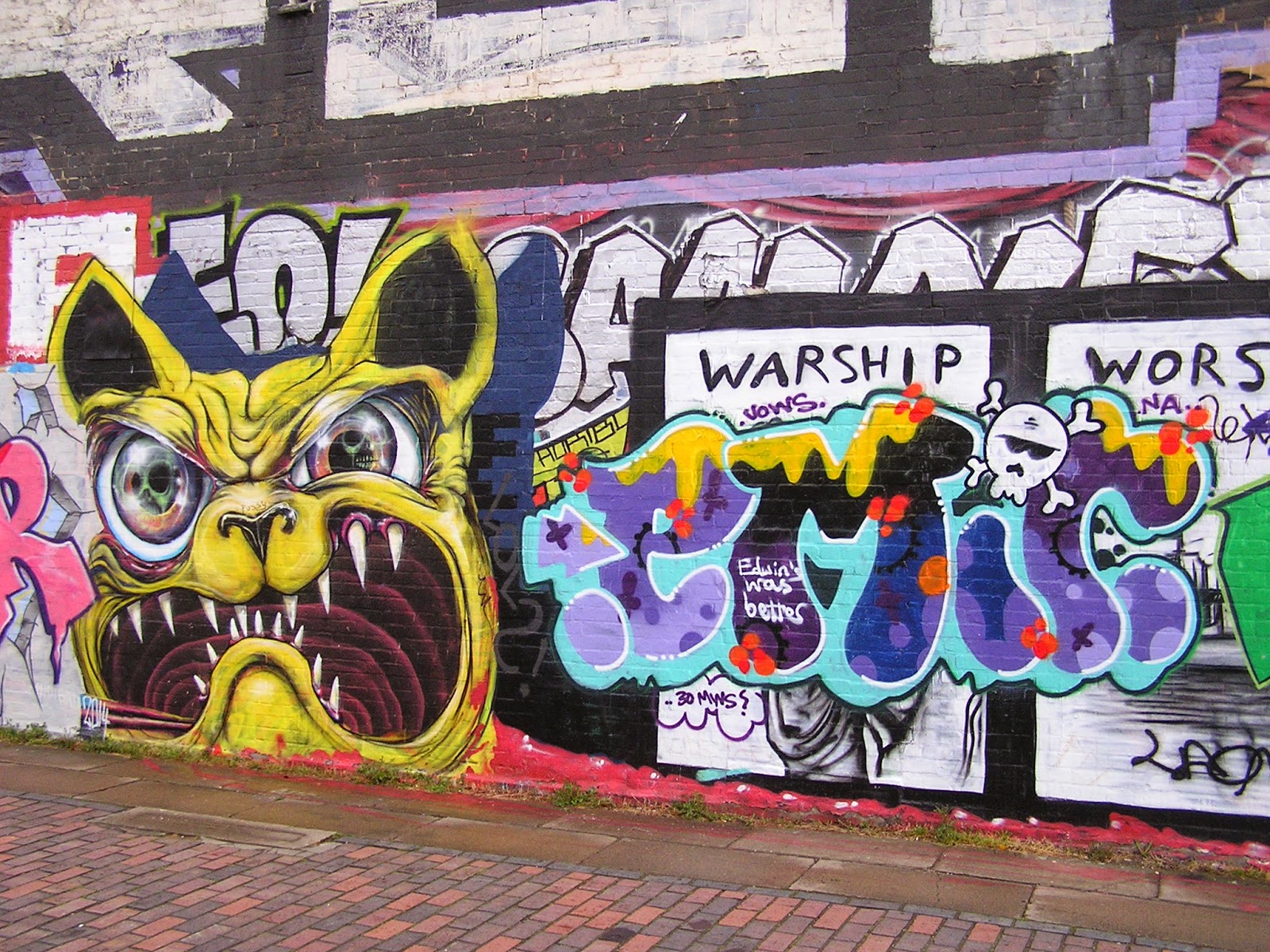 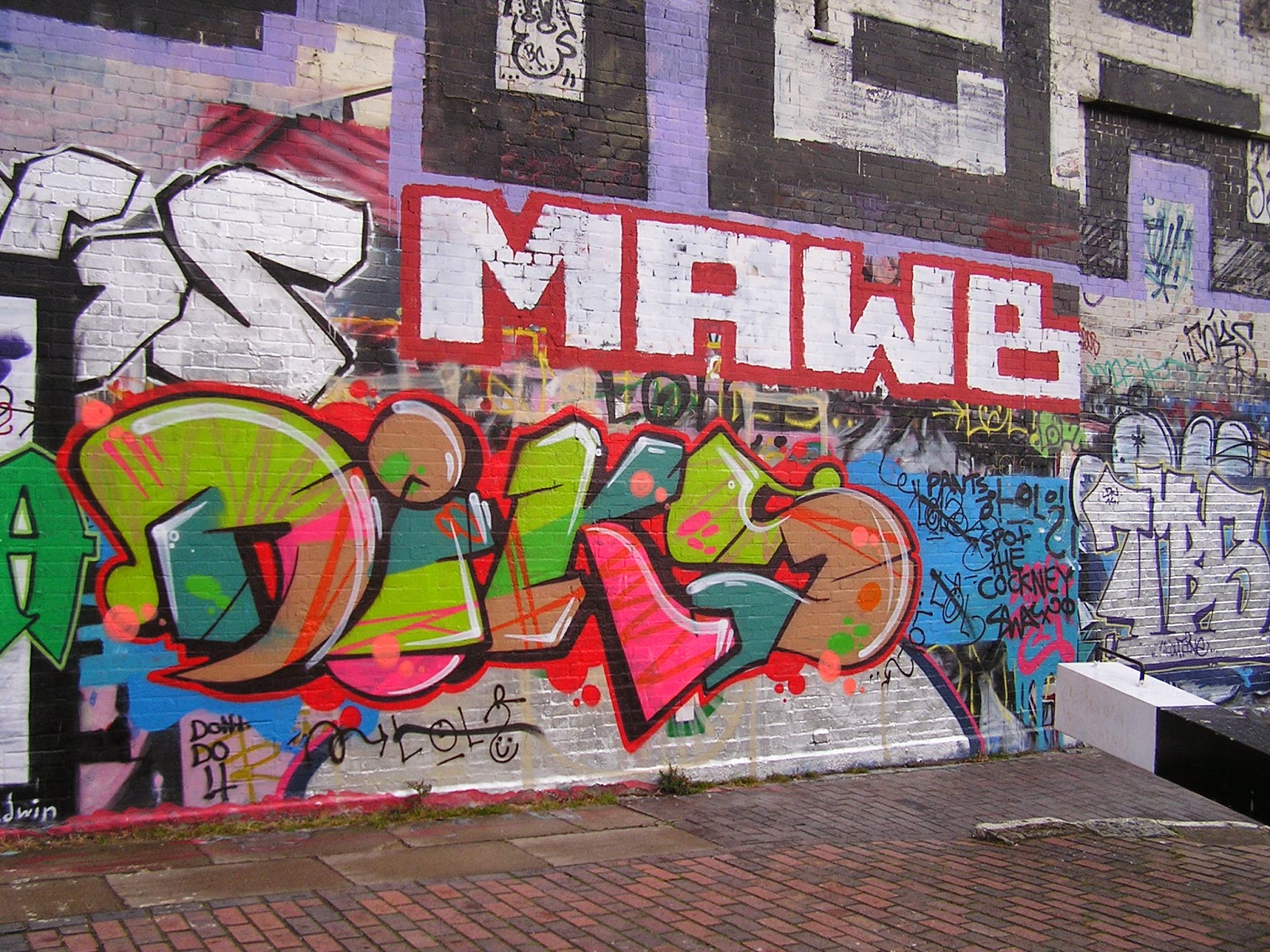 Soon after leaving the Old Ford Lock we turned left into Duckett's Cut aka The Hertford Union Canal. A little, over a mile long, it has three locks. At the first one, which has a rise of only about three feet, we were cheered up by the graffiti which adorned the otherwise grim concrete wall.
As the day went on the sun appeared for ever-increasing spells so that our arrival in Little Venice was in glorious sunshine. The towpath was busy with Sunday walkers, strollers, gonggoozlers, runners, cyclists etc. As we passed Battlebridge Basin we glimpsed Benbow on her permanent mooring at the far end by the Canal Museum. This stretch of the Regent's Canal is now almost completely occupied by permanent moorers. Whilst some just moor up and ignore any restrictions there is an increasing presence of 'bridge hoppers'.  These are often working in London and live on the canal as a cheap form of housing.. They class themselves as Continuous Cruisers and pay lip-service to the regulations by moving their boats every few weeks.from one point of road access to another.  We were accompanied at various times today by such boats and in every case they were charming people but quite unfamiliar with handling their boat or operating the locks. 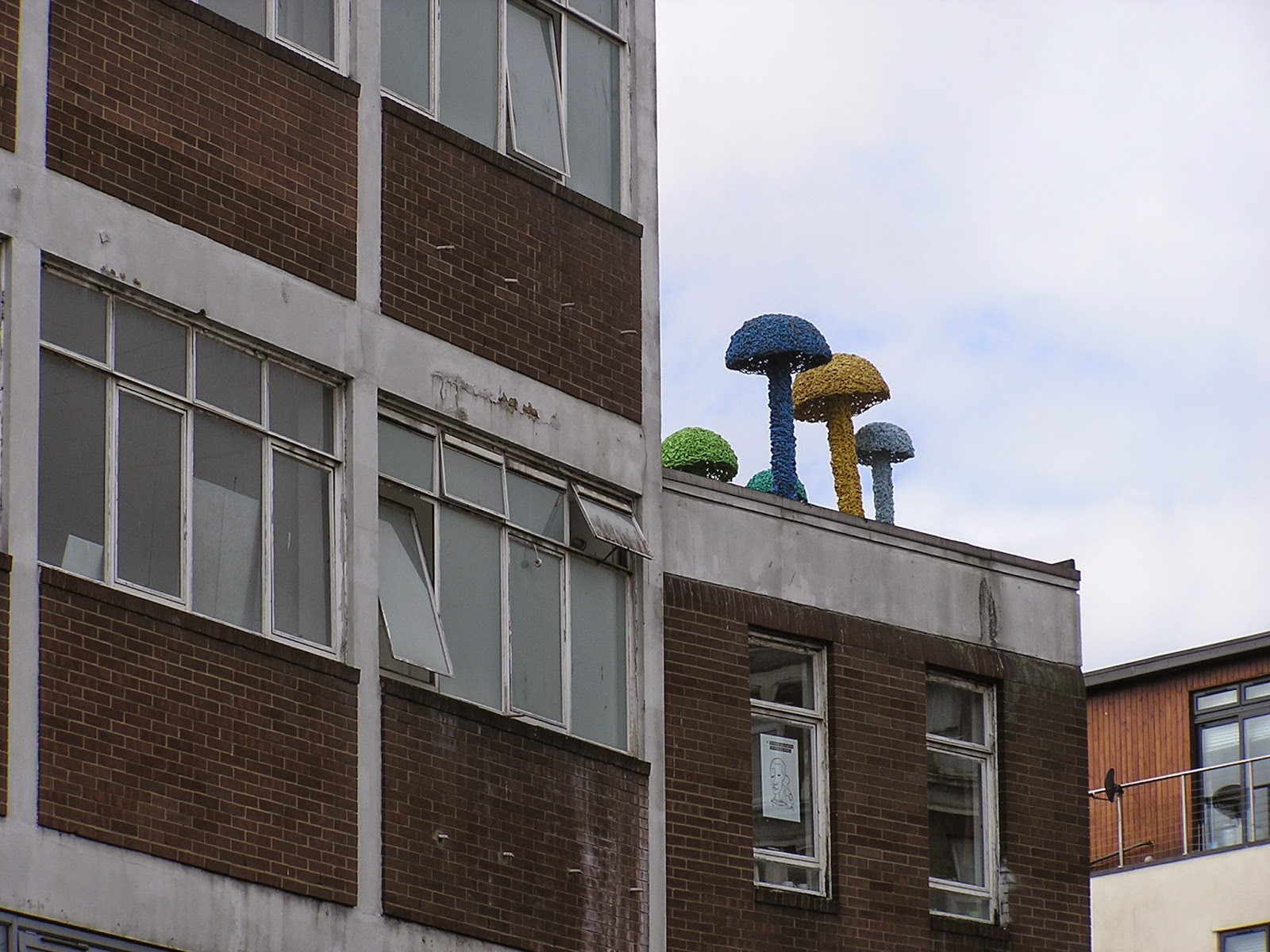 Further entertainment was provided by these mushrooms on a building on Mare Street.

Also, of course, Camden Lock was teeming with people enjoying themselves. 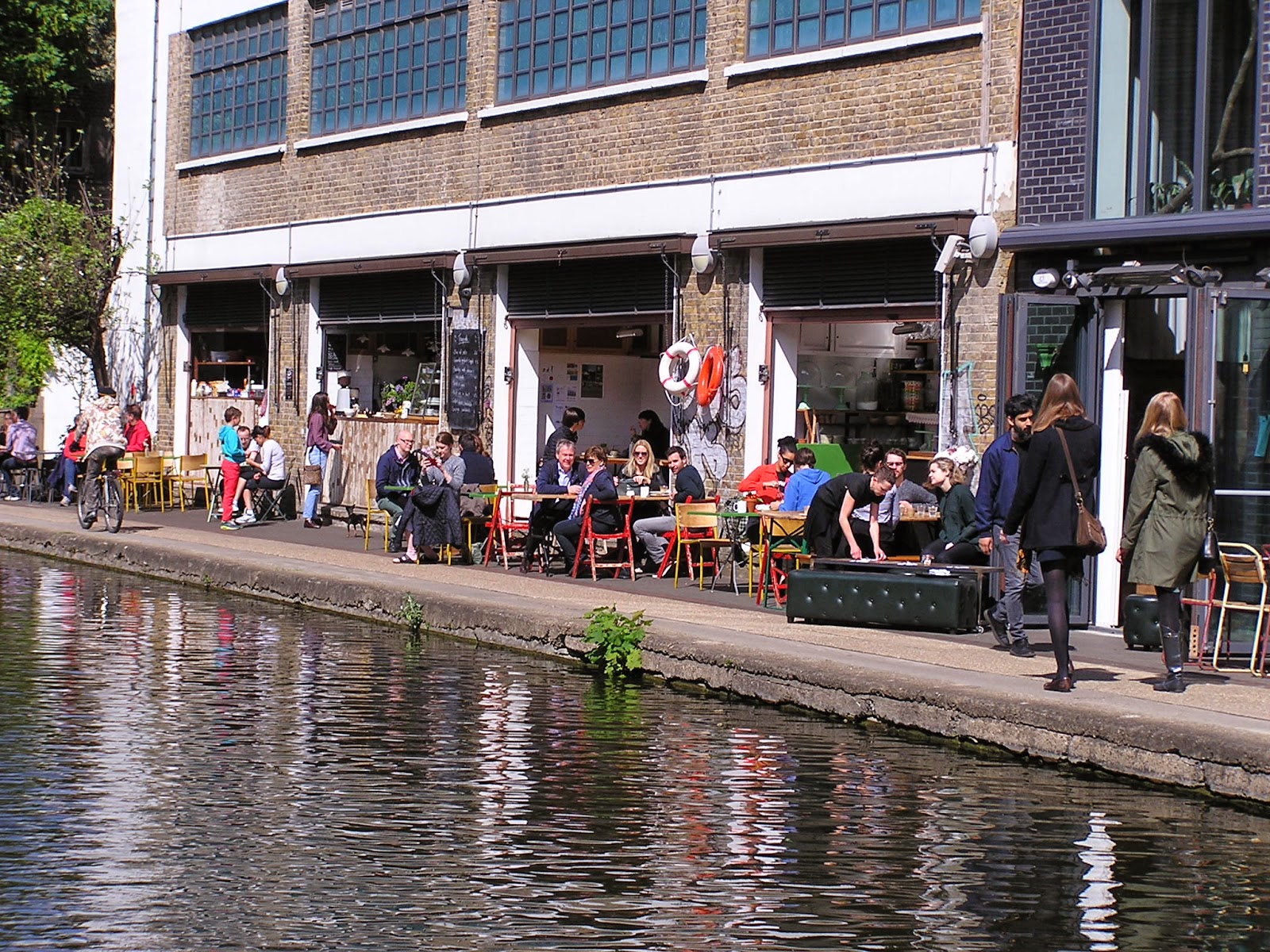 We were intrigued by the open-fronted retail units which reminded us very much of China. 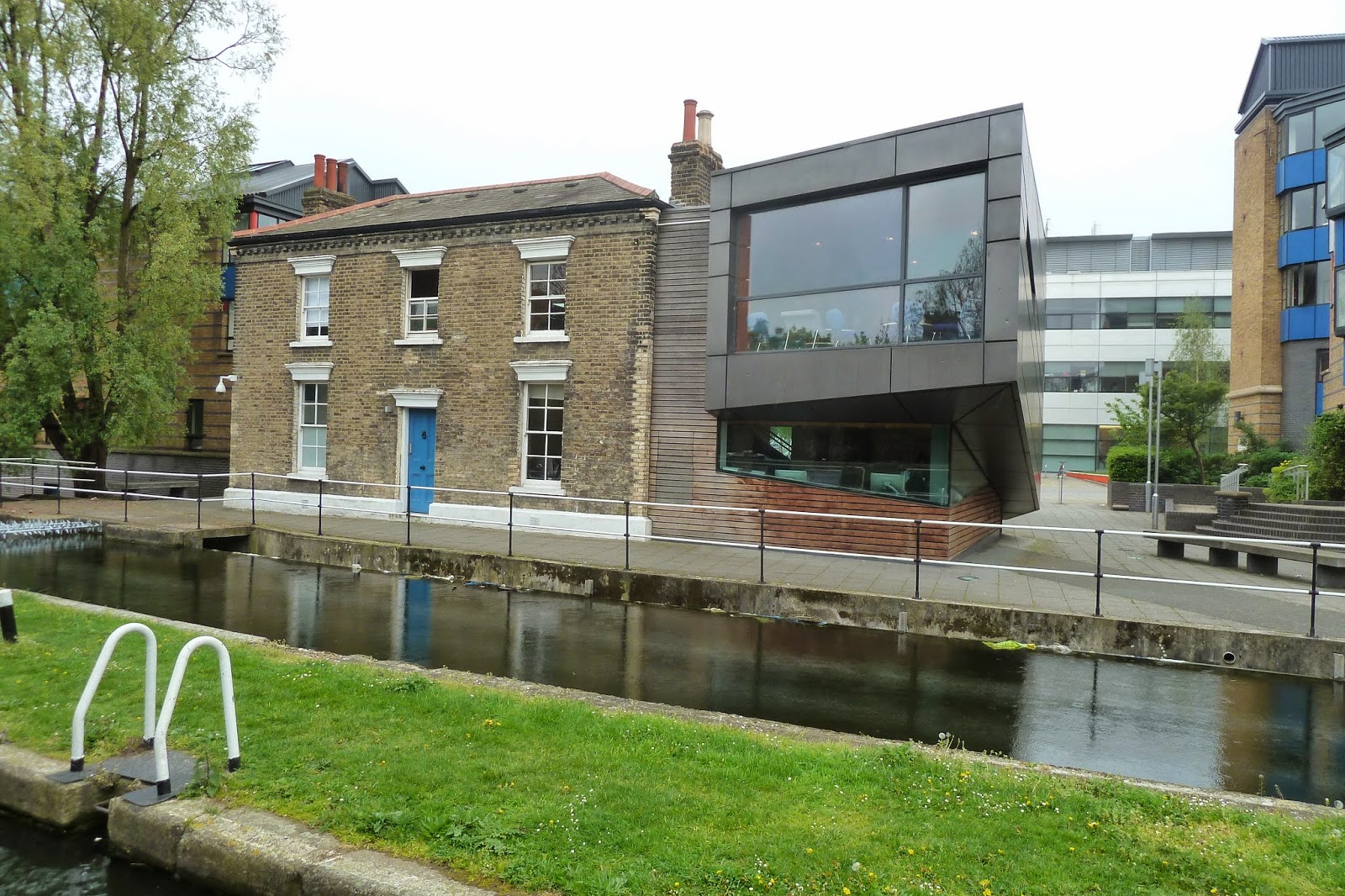 We were amazed at how this extraordinary building extension was granted planning consent.

It brought to my mind Prince Charles' famous description of the National Gallery extension as a Carbuncle.

When we left Paddington basin last Friday there were five vacant mooring spaces.  On our return today the basin was full, with boats breasted up on the hospital side. We found a space, eventually along Delamere Terrace which is now rather devoid of boats as it prepares for the canalway Cavalcade next weekend