Sally-Ann's Autumn
With fewer boats around than usual, we managed to moor close to the Waterways Museum at Stoke Bruerne hoping that there would be a boat to share the locks with in the mooring.
No such luck. The only other boat was a Wyvern hire boat facing the other way. Passing the time of day with the hirers who hailed from Tasmania it transpired they had decided not to tackle Blisworth tunnel. In order to return their boat on time they would have to turn round and return immediately and two passages of a dark and wet tunnel was not particularly attractive to them. Luck had changed - we now had someone to share the locks - with seven crew members - what a bonus!
As we approached Cosgrove where we intended to moor we were discussing Robin and Carole who used to live on nb Inanda and moored by the Barley Mow in Cosgrove. They sold the boat soon after travelling up the Thames to Lechlade with us and now live in a house. Mrs L was musing that we had not seen Inanda around since the change of ownership. I was only listening with half an ear as my attention was concentrated on avoiding a boat coming through the beautiful bridge at the beginning of the village . As it passed we realised it was in fact Inanda with the new owners.
We moored above the cattle creep which now has a sign post describing it as a horse tunnel. I do not know if there is any evidence of it being built for horses or whether the local authority decided to dumb down the description. I recall this featuring on the front cover of Devil in the Detail, one of the murder mystery stories set on the Grand Union written by Leo McNeir 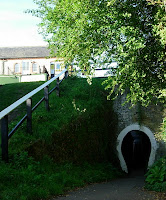 If you decide to read these books I recommend that you do so in chronological order starting with Sally Ann's Summer.

Central to these stories is the narrowboat Sally-Ann. 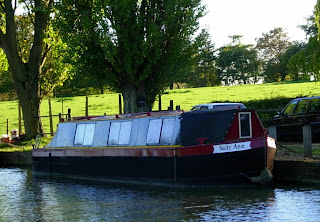 Moored just across from us, by the old brewery, is none other than the star of these books looking just as she is depicted in the books. About time she was freshened up, Mr. McNeir
Posted by Peter at 17:16