Salt of the earth
On the banks of the River Aire, where police have been retrieving the gruesome remains which were monopolising the news papers before the more recent tragedy in Cumbria, is the delightful village of Saltaire. It was designed and built from scratch by Titus Salt for the workforce of his new woollen mill. Titus Salt had become a successful worsted manufacturer with five mills around Bradford when, in 1851, he decided he could be even more successful if he consolidated all the production processes into one building. Two years later he had created Saltaire. The main factory building has a frontage of 545 ft and its six storeys attained a height of 72 ft. Straddling the Leeds & Liverpool canal and with a railway alongside the factory it was well located. The original plan was to use the River Aire to provide water power but this proved inadequate and steam engines were installed. The engine beds alone required 2400 tons of stone so this was a sizable operation. The mill housed 1200 looms and over 2000 employees producing 18 miles of cloth a day for which the steam engines consumed 50 tons of coal.
Consolidation was not the only motive for the move. Titus Salt had become aware of, and increasingly concerned at, the poor health of his workforce in Bradford. A survey of 161 woolcombers in 1844 showed that their average age at death was 14 years 2 months! Salt formed the opinion that poor housing and lack of education were the main causes and that alcohol did much to exacerbate this. At Saltaire, therefore, he built over 800 houses and his workforce were encouraged to move from Bradford to the new village of Saltaire. Each house was equipped with water, drainage, gas and a back yard with private toilet. The size and style of the houses reflected the status of the employee but there was no segregation in the street layout. The village was laid out on a grid plan and communal buildings were also provided - church, school, club and institute, infirmary, allotments , bath house, 40 shops,Sunday school and alms houses. But no pub. A dining hall for those not living in Saltaire was built opposite the factory and linked by a tunnel under the road. There were generally 600 taking breakfast and 700 at dinner. 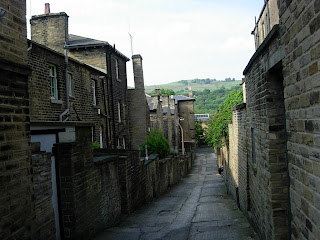 Every house had a back yard to facilitaate removal of waste
Census figures indicate the average occupancy of these two up/two down houses was five people. Overseers houses had the luxury of a small front garden.
Three stroey units were often for unmarried workers but proved unpopular and were adapted for more senior staff.


Salt was not the first mill owner to develop a paternalistic stance. Robert Owen - the father of the co-operative movement - had done something similar at New Lanark 40 years earlier and closer in time and geography the Akroyd brothers had built 132 terraced houses for their workers in Halifax in 1847.
What makes Saltaire so important is the scale of the enterprise.

Woollen production ceased in 1986 and today the mill houses retail and exhibition units including a large collection of Hockney paintings, and a large bookshop. The village still retains its unique atmosphere. One feels that the residents appreciate this and are at ease with it.
If you visit Saltaire try to take refreshment at Vicars Cafe/Bistro where 10% of the profits go to support an AIDS charity in Zimbabwe.
Posted by Peter at 08:32