December is a month full of festivals, many pagan in origin but long ago absorbed by religions.
One which has fascinated me and which I have never experienced is celebrated in Scandinavia, particularly Sweden, in  Dalmatia and in Syracuse where St. Lucia was born. Although she is venerated in most countries there are few places where her day - December 13 - is celebrated so enthusiastically as in Sweden. The celebration comes from stories that were told by monks who first brought Christianity to Sweden.
St Lucia was a young Christian girl who was martyred, by the Romans for her faith, in 304AD. The most common story told about St Lucia is that she would secretly bring food to the persecuted Christians in Rome, who lived in hiding in the catacombs under the city. She would wear candles on her head so she had both her hands free to carry things.  Lucy  comes from the Latin Lux meaning light so this is a very appropriate name. December 13th was also the Winter Solstice, the shortest day of the year, in the old Julian calendar and a pagan festival of lights in Sweden was turned into St. Lucia's Day. 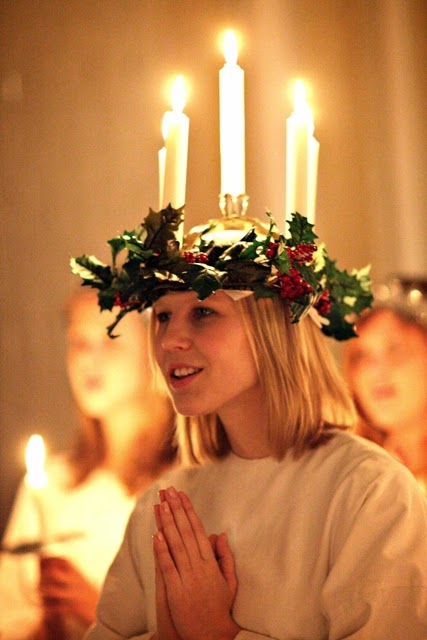 St. Lucia's Day is now celebrated by a girl dressing in a white dress with a red sash round her waist and a crown of candles on her head.
The crown is made of Lingonberry branches or holly which are evergreen and symbolise new life in winter. The red sash arond the waist  symbolises martyrdom. Schools normally have their own St. Lucia's and some town and villages also choose a girl to play St. Lucia in a procession where carols are sung. A national Lucia is also chosen. Lucias also visit hospitals and old people's homes singing a song about St Lucia and handing out Pepparkakor, ginger snap biscuits. 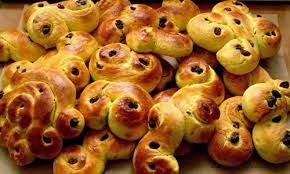 A popular food eaten at St. Lucia's day are Lussekatts (Lucy's Cat) , St Lucia's day buns flavoured with saffron and dotted with raisins which are eaten for breakfast


There are a number of video clips available to view on the subject of St. Lucia and I would commend the follwoing to you
This is a charming film explaining St Lucia Festival 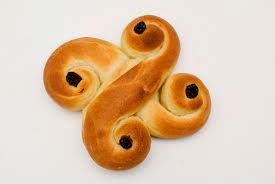 another egg beaten
and 4 raisins per cat for decoration

Method
To a small bowl, add the yeast to the warm water and leave to stand for 5mins  (fresh) or 15mins (dried)
Add saffron to milk in pan and bring slowly to the boil, stirring until the milk is golden brown.
Strain the milk into a large bowl , stir in the butter and sugar
Cool to lukewarm then stir in the yeast mixture and  beaten eggs
Add the flour (with a little salt) to this mixture and work into smooth dough
Add the sultanas and knead
Cover with a cloth and leave in warm area for 90mins until it had doubled in size
Pre-heat oven to 375F  / 109C / gas 5
Knead dough on floured board and divide in 16 pieces
Roll each piece into a sausage about 10in long
Form 8 pieces into an  S  shape with one loop smaller than the other
Form 8 pieces into reverse  S  shape in the same way
Cross one piece diagonally over one of the other pieses and poress gently together
Press raisins into place for eyes and nose then leave for 20 mons to prove
Brush beaten egg over cats and bake for 20 mins when they should sound hollow when tapped