£99 Trip to Pairs
Last week we took advantage of a very special offer which came our way through what used to be Driveline but which is now AA Getaways.  We had three nights B&B in a hotel in Paris and return Eurostar trip for £99/head.  This was very much the headline price and as soon as we booked we were asked if we realised that the hotel was a loooong way from the centre of Paris.  I knew where it was and was very happy with the location.   Hotel Sovereign is located on the banks of the Seine on the St. Ouen/ St. Denis border. With a 20 min walk to the nearest metro station and another 20mins on the train to the city centre, it may not suit everyone. 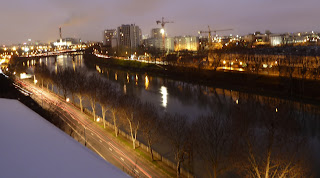 It does  benefit from the views over the river. 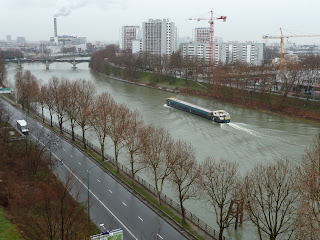 the view from our bedroom
was enjoyable.


We tend to use the buses as there is more to see than stuck underground being pestered by east European beggars on the metro.
We did experience a new technique whilst viewing the Pont des Arts on  Thursday morning.  A young lady approaching us stopped and picked up a wedding ring from the ground in front of  us, and after a little banter, offered it to us. This was the pre-cursor to asking for money for food.  She appeared quite honest and our initial reactions reflected this belief but we soon became suspicious when she said she could not sell the ring because she was not French.  As we walked through the Tuilleries gardens a little later an altogether less honest looking guy found an identical ring immediately  in front of us.  What a co-incidence.  French men must be very careless dropping so many wedding rings in such a small area.
Posted by Peter at 15:34