A Piece of Halifax

Make haste while the the sun shines is not a well-known adage as I only coined it ten minutes ago but I fully expect it to enter popular culture as the weather changes become ever more rapid. Following this soon-to-be-popular adage, last week we took our bus passes for some exercise every time the sun came out. Although the quickest public transport route to Halifax from Burnley is by train, it costs money. So we decided to try the bus services.  This proved to be a more enjoyable journey through the Lancashire and Yorkshire countryside. than trying to catch the sights as they speed past the train.
In Todmorden where we changed buses, we demonstrated our bravery by buying a "beef" pie for lunch. (Come on!!! Keep up with the news)
If you have, or can acquire, some children aged between 5 and 12 years old then

in Halifax is the place for them to take you.
On this occasion we decided to forgo this pleasure in order to see the town from an adults perspective..
We found three architectural gems and a Chinese buffet. 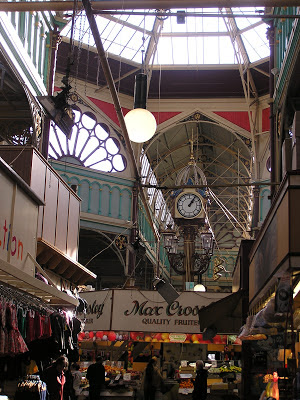 The most difficult to see is the Market Hall because it is full of market stalls!

Catching glimpses of the elegant structure and of the clock between the stall as I walked around soon caused She Who Must Be Obeyed to disown me as I was colliding with the genuine shoppers. 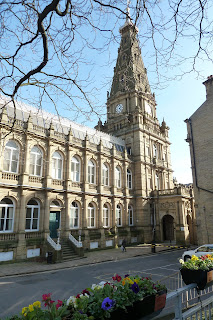 The Town Hall was designed by Sir Charles Barry who was also responsible for the Palace of Westminster (although he relied heavily on Pugin for the execution of that project, particularly the interior)
Barry died before either building was complete and both projects  were finished by his son Edward. 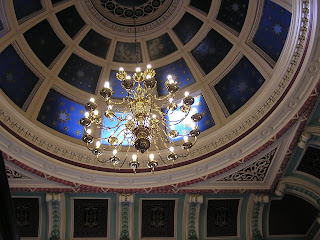 But it was not the exterior which left the greatest impression on us.

Enter the hall at the bottom of the tower and look up at the elegant cupola set off  by the delicate chandelier. 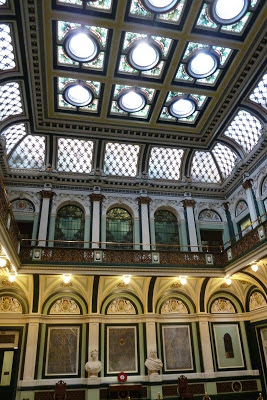 Then take a left turn into the Victoria Hall.  Ascend to the balcony for an enhanced perspective on the space and a closer study of the Mansard roof panels. The light and space which the roof design bestows on the hall were not presaged by heavy exterior. 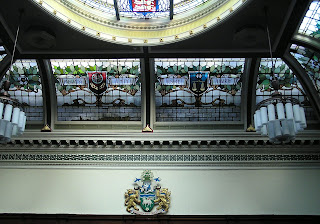 If the council chamber (former court room) is unoccupied then  take the opportunity to look up at another roof. With its heavy wood panelling and bench seating this room is more sombre than Victoria Hall but the classwork is even more impressive. 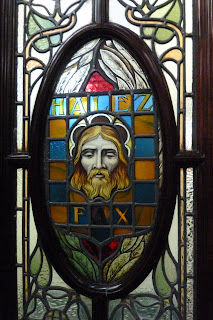 We were unable to enter the mayor's Parlour but I found this glass panels in the door intriguing.

The inscription  - Halez Fax - sounds as though it could be the origin of the name Halifax but I have not found a convincing translation or explanation yet.

Despite all this wonderful decor Halifax's Pièce de Résistance has to be  The Piece Hall. 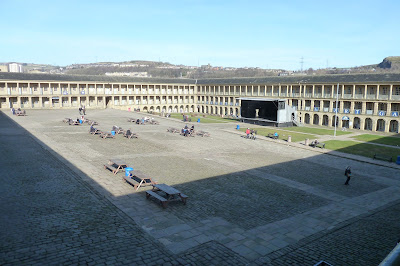 In the days before the Industrial Revolution woollen  cloth production was carried out in private homes - a true cottage industry. Often one family would spin yarn whilst another would weave cloth from it.  It was generally sold in  Pieces ie: lengths of 30 yards.  The width was determined by the size of the loom. In the eighteenth century so many families were producing woollen cloth in and around Halifax that it was decided that purpose-built market place was needed where the trade could be organised.  Two sites were considered and in true Yorkshire character the site which was offered free of charge was chosen for the Piece Hall. despite it being on sloping ground. It opened on 1st January 1779 with 315 sale rooms around a courtyard 100 yards on each side providing 10,000 square yards of open space.
Each room was 12ft x 8ft with one door and one window. Some of the original blown glass remains and records show that some tenants came from as far afield as Skipton, Burnley and Keighley. 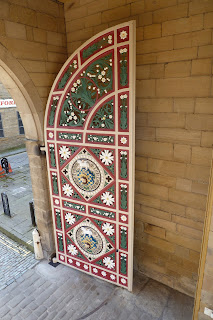 Trading took place between 10am and noon each Saturday. Tenants had access from 8am to 3pm and were fined for breaches of the rules such as selling outside the allotted hours or sweeping rubbish through the railings.  The porter who administered the rules was very strict as his only remuneration came from the fines he imposed.
Inevitably, as mechanisation was introduced to the woollen industry, production  was concentrated in factories and 35 years after its inauguration the Piece Hall was struggling to fill 200  of the rooms each week. 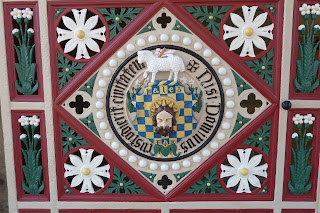 By 1868 it ceased to operate and was handed over to the corporation who adapted it for use as a fruit and vegetable market.
It was around this time that the gateway on Horton Street was enlarged to accommodate vehicles and these lovely cast iron gates erected. 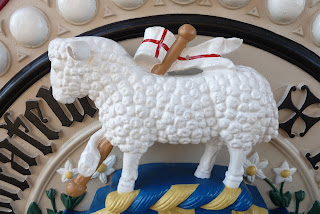 In 1972 the Piece Hall had fallen into such a state of disrepair that Halifax Corporation decided to demolish it but when the Council vote was taken, it was saved by one vote! 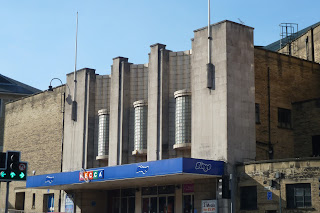 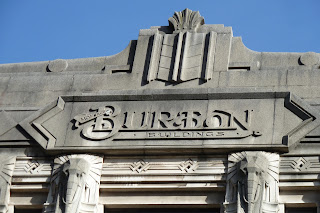 Burton the Tailors
Shop on the ground floor:
Dance hall on the first floor