Bears and Treacle
We have been on the Macclesfield and Peak Forest Canals for a couple of weeks but are rejoining the Trent & Mersey on Thursday. We have found it difficult to moor at anywhere other than recognised moorings as the profile of the canal is very shallow and we are unable to get close to the bank. Bridges have also been quite a struggle as we crawl through the narrow and shallow channels. Scenery is wonderful, especially on the Peak Forest we are told. It rained all the time we were up there and could see nothing but mist.
The towns of Macclesfield and Congleton were renowned for silk production in the 19th century but there is little evidence of this now apart from the Paradise Mill Museum in Macclesfield. Here they demonstrate the various machines and processes involved in producing silk fabric.
The name Macclesfield is believed to originate from Michael's Field (the parish church is St Michael's) and although it is often referred to as the Silk Town many locals prefer the nickname Treacle Town. The origin of this moniker is rather confused but seems to involve a barrel of treacle breaking in the street some centuries ago and the local poor taking advantage of this free food supplement. I was unaware of this before visiting the town. I was, however, more familiar with another claim to fame. About five years ago The Times named Macclesfield as the Most Uncultured Town in England. When we eventually found the visitor information office they did not mention this to us. Nor did they tell us about a local resident, Paul Oldfield - or his stage name of Mr Methane - who was/is a professional flatulist. 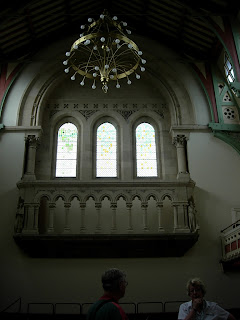 Congleton, on the other hand, has a much more welcoming ambiance. The town hall is really quite delightful inside and out and the tourist information office were actually happy to tell us about the town. Of course the locals do not call it Congleton. To them it is Bear Town which is quite obvious when one waits for a Bear Town Bus. The origin of this is Elizabethan from a time when bear bating was popular. The town bear died the night before the town's summer shutdown, or Wakes, and the population agreed to use the Bible Fund to buy a new bear in order that the celebrations should not be interrupted.
They even have a song written about it...

The Wakes coming on and the bear he took ill
We tried him with potion, with brandy and pill
He died in his sleep at the eve of the Wakes
The cause, it was said, was strong ale and sweet cakes

Now a parson is useful in times of great need
And imbibed with strong porter he quickly agreed
The parson, his Bible he gave then and there
We sold it in Nantwich to buy a new bear

The new bear, a she-bear, was toast of the town
To music and laughter she danced up and down
So loudly the cheering would waken the dead
It caused the old bear for to rise from his bed

Pills, potion and brandy induced a deep trance
And refreshed by the music he began for to dance
He danced down the road causing many a gaze
And word quickly spread that the old bear was raised

To be fair to Macclesfield we did find some hidden treasure but you will have to wait until tomorrow for that.