One Wren or Two?

On returning to our boat a few weeks ago after a day out we discovered this wren flapping around in the cratch. She (all wrens are called Jenny to me) had squeezed in perhaps to avoid the very heavy rain and could not find a way out. As we were more concerned about her welfare the quality of the picture suffered a little.

Two years ago when we visited Ingestre, Staffs, the church was surrounded by scaffolding and we were unable to see much of it.Today we trekked up to the village and were rewarded by an absence of visual obstruction apart from bushes and trees. 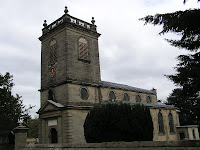 We still did not get inside as it is open on Wed and Sat afternoons. John Roper, in his Guide to Staffordshire Churches declares that "Ingestre is probably the finest Renaissance church in England outside the city of London" It is widely believed to have been designed by Sir Christopher Wren but there appears to be no documentary proof of this. One of the north windows was made by Morris & Co but we will have to view that another time.
Posted by Peter at 21:32