What a Creep!
Unusually for us, we stopped overnight between Fenny Stratford and Cosgrove.
The last of the locks down from the Tring Summit is a tiny let down. 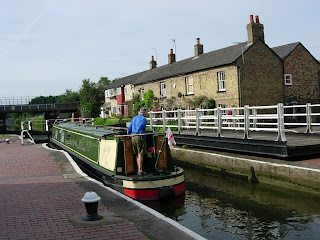 Due to a surveying error there was a difference of about a foot to be adjusted here. Crossing the canal at this point is accomplished by a swing bridge. Charming as it is this is not the only reason we like stopping in Fenny Stratford. We try to get at least one day at Bletchley Park. There is always something new to see and so much that an annual visit is necessary. The entrance charge covers all visits made in twelve months which is a great incentive to return. We managed a day and a half this week. Our other reason for stopping here is to visit Gordon, Beckie and their two lovely boys Alex and Matthew . These are educated at home and are the most polite and well balanced children we have met for a very long time.
Or first overnight stop on leaving Fenny was at Giffard Park in order to visit the Rohan outlet store. We like these clothes which are particularly good for travelling but the Company's approach has changed considerably since buying my first jacket in 1976. Now the range is changed in response to fashion rather than developments in performance. However, if you are not concerned whether you are wearing this year's colour or not the outlet store does provide the opportunity to buy items at more reasonable prices. 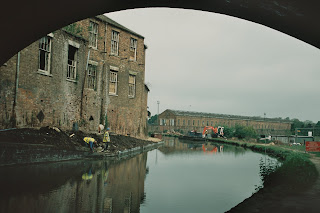 Our second stop was in Wolverton. When we passed through in 2006 the railway coachworks had just been demolished. Originally set up to repair locomotives, the works soon started making their own locos. In 1862 locomotive production was concentrated on Crewe and Wolverton became the LNWR carriage works, building the royal trains of 1903 and 1961 amongst other more mundane rolling stock. During WWII the factory assembled Horsa gliders for the D-Day airborne assault on Pegasus Bridge.
It was pleasing to see that some of the old buildings have survived and are being redeveloped sympathetically. 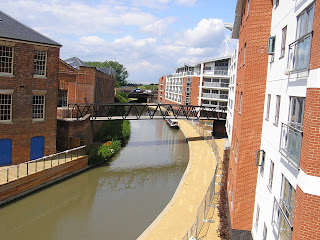 The towpath has been considerably improved and equipped with mooring rings at useful interval which is quite a change nowadays when many redevelopments pay lip-service to the boaters with inadequate or no mooring facilities. It is not uncommon for new residential developments to instigate a mooring ban. It would be useful if these new canalside dwellers were aware that without the boats the canal would soon become the "stinking ditch" feared by many ignorant of its beauty and benefits 200 years ago. It is a shame that there is already dog c**p along the new towpath. 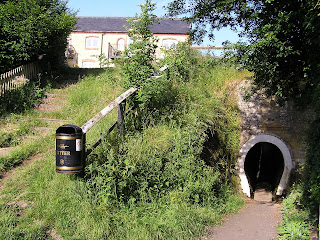 Cosgrove is only a short run from Wolverton but we enjoy stopping here and visiting Robin and Carole on their narrowboat Inanda. We moored opposite them so that our route involved the fascinating cattle creep under the canal.
This picture is for George and Lesley who are fond of these things.

Robin and Carole have recently acquired a cottage and so Inanda is now up for sale. So if you are looking for a 55ft live-aboard narrowboat with a village mooring then this should be a good bet. (Robin was an engineer at Mercedes for 17 years)
Posted by Peter at 19:51