Stoned Again
We always enjoy visiting Stone despite managing to arrive a week before or after a festival of some kind. In 1976 we started our first ever canal holiday here. We hired a tiny narrowboat named James Brindley II from Canal Cruising Co. Into this boat were squeezed six berths. A hire boat this size now would have only two berths. By the toilet was a lever which when pumped, drew canal water into the toilet and back into the canal along with the waste. Not all the old ways were better!
Another date which Stone remembers wit almost as much affection is 10th June 1766. On that day James Brindley and Josiah Wedgewood met in the Crown where they were appointed Surveyor-General and Treasurer respectively of the Grand Junction Canal Company with the plan to build what we now know as the Trent and Mersey Canal. The opening of the Stone section in 1771 was not quite as auspicious as they might have hoped as a lock and a bridge both collapsed. However, things soon improved and the canal became very successful. 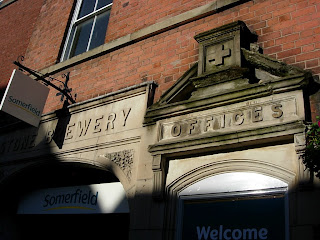 Our visit in 1976 was just two years too late to enjoy a pint of beer from the brewery of John Joules & Sons but we did our best to make up for the lost time. The brewery building is still standing alongside the canal and appears to be enjoying a new life. In the High Street the Somerfield store still bears the Joules trademark cross (although not in colour) and legend OFFICES
Posted by Peter at 22:31