How not to spend our money - 2
Surveys reveal (don't you love that prelude to unsubstantiated assertions?) that only 5% of visits to the canals involve boating or angling. Actually these figures come from the omnipotent British Waterways to whom I have referred on occasions before.
If you consider that figure coupled with the fact that only boaters and anglers make direct financial contributions to the maintenance of our waterways then I feel qualified to express my views on how BW spends our money.
During our week or so cruising the southern Oxford canal we have been hit only once by an oncoming boat. This is very surprising as there are quite a few boats around and many of them are hire boats which increases the chance of and inexperienced crew. From Braunston Turn to Banbury there is hardly a bridge where the line of sight is not obscured by bushes and other flora. Has anyone at BW ever tried to manoeuvre a 60ft narrow boat safely through a bridge when you have to get 30ft through the bridge before you can see if there is anyone coming the other way? 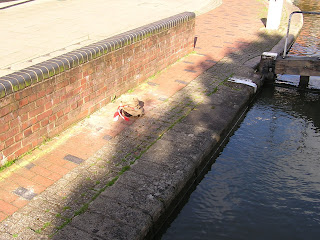 However, in their infinite wisdom they are installing THREE bollards alongside each lock on this canal. What for? No one will use them. All they are achieving is an increase in trip hazards at what are already the most dangerous places on the canals.

If you don't believe that, take a look at the following photos of recent incidents. 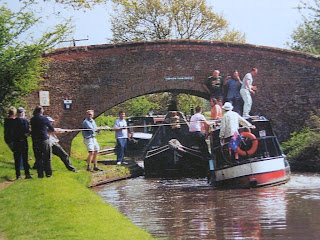 Two into one doesn't go

These boats were jammed in the bridge because of the intransigence of the crews but the same could happen if sight lines are not kept clear. 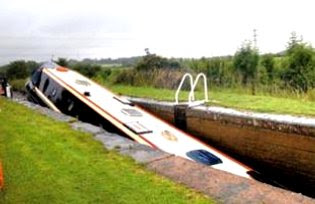