A bit on the side
About 30 years ago we negotiated the eleven locks at Atherstone in a hire boat. In those days the side ponds were in operation. These locks are unusual, but not unique, in having a second chamber alongside each lock and a sluice gate connecting the two. When emptying a lock, opening this sluice will transfer half a lock of water to the side pond. When the lock next needs filling the same half lock of water can be transferred back thus saving up to half a lock of water for each boat passage.
It is disappointing to see that neglect by BW over the intervening years has rendered all but one of these side ponds are derelict. This is another manifestation of the 'dumbing down' which is so prevalent in society today. We can't trust the public to operate these side ponds properly as they require the brain to be engeged. Much better to waste water and spend the maintenance money on painting bollards and sticking little signs by every bridge on the Coventry Canal to remind people of the name of the canal. 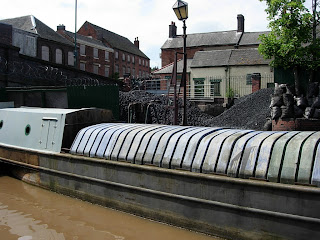 It is comforting to find a real coal yard with real sacks of coal above the top lock, however - a rare sight indeed. Last year when we passed this way we had to wait two hours whilst an obstruction was removed from the top lock. By the time the flight opened there were about 20 boats waiting and I have to admit that we were so busy drinking tea and gossiping with the others in the queue I did not notice the coal yard on that occasion.

This reminds me of my childhood when , at primary school, each classroom was heated by coke-fired stove which stood at the front next to the teacher's desk. In the winter the crates of milk in one-third pint bottles which we consumed during morning break were sometimes brought in and placed on top of the stove to warm up. Occasionally this was done too early and the milk boiled over. On many occasions the milk was too warm for the waxed paper straws we had to drink with and they unwound. This could have passed as a practical science lesson.
The coke was delivered by an ancient black man in an ancient black flat bed lorry. When he had started these deliveries in his youth it had been by horse and cart. I believe now that the man was white underneath and the lorry was green. Deliveries were quite frequent as the cellar only held one ton - 20 sacks for the metricated readers. One day the black man and black lorry did not come - in their place was a young man in blue overalls and a shiny lorry. This did not go down well with Miss Reddit, the headmistress. This needed watching. And sure enough, her suspicions were vindicated when the shiny man came in to the office after only tipping 19 cwt into the cellar.
"I'm not signing for a ton of coal - you have only shot 19 sacks."
Miss Reddit was not going to let this young upstart pull the wool over her eyes.
The shiny young man looked nonplussed,
"I can't get any more in there" was all he said.