"Pull harder Mr. Allnutt"
We all know that "Play it again, Sam" did not appear in Casablanca but choose to ignore that fact in the name of Art. I cannot recall whether Katherine Hepburn actually made the utterance above to Humphrey Bogart in the film African Queen but I am now making my bid for immortality by creating a new legend to be perpetuated by future generations. I am sure the Hollywood version of the missionary's sister would have said this if the scriptwriters had been smart enough. So start quoting it and remember me when you do so. 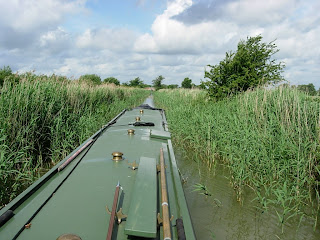 Most of the film was made on location in East Africa and Margaret's father saw some of this taking place on Lake Victoria. If you have not seen the film I suggest you read the book by C.S.Florrester which, without the Hollywood ending, is a much better story. However, those of you who have seen the film will understand why I believe that at least part of the location work was carried out on the Aylesbury Arm. As we passed, those reeds those nearest to the boat lay down in supplication and then rose slowly after our passing to resume their original stance. So even the reeds believe me.
On arrival at the town basin we experienced the warm and helpful welcome for which Aylesbury Canal Society is renowned across the canals. However, ACS is under threat.In order to pay off DEFRA's fines for failing to make the Farm Payments on time, BW has had its grant cut and is now embarking on an accelerated programme of property redevelopment. (how long, I wonder, will it be before BW is solely a property company and the Environmental Agency take on the management of the canals?) In Aylesbury they are conniving with Bucks County Council to move the boats out of the town to enhance their redevelopment plans. It seems that their view is that a canal should not be occupied by canal boats with real live people actually living on them. A canal basin should be surrounded by new apartments and coffee shops where commuters can be at one with a sanitized water feature whilst the boats are moved out of town and out of sight. After the horrendous concrete structures erected in the 1960's one would have thought that the council would not be in such a hurry to repeat this folly. Improve the area, by all means. Make it more accessible for all canal users - pedestrians, ramblers, cyclists, anglers etc - but don't forget why the canal is there at all. It was not built to be gazed at but to be used. 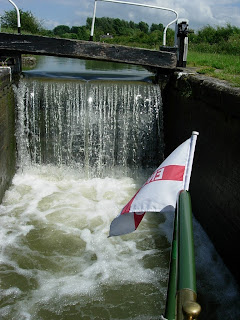 Returning to African Queen,
is it possible that the Aylesbury Arm
provided inspiration for other scenes too?
Posted by Peter at 22:48