Who has seen Big Ben?
I am not keen on water with a mind of its own. I like it to stand still whilst we navigate Gecko. 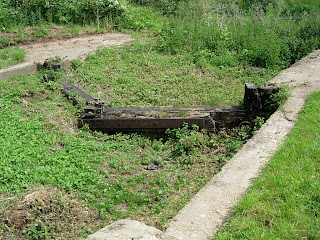 But today we have travelled several miles down the River Trent from Shardlow and even more miles up the River Soar. And survived! The waterway to Loughborough has so many weirs it was difficult to know when we were on river and when on canal. However it only needs a weepy film on tv to generate enough waster to cause the Soar to flood. Then it's easy to tell. The first locks we encountered after leaving the Trent were obviously replacements as there was evidence of older locks alongside.


Kegworth Old Lock
Loughborough boasts the largest bell foundry in the world - Taylors - where Great Paul, the 17ton bell at St. Paul's Cathedral in London, was cast. Local residents may also tell you that Big Ben was cast here but this is another of the many stories which surround this bell. It was actually cast in Stockton-on-Tees and weighed 16tons. As the tower was unready Big Ben was first hung in Palace Yard but it cracked in use. The metal was recast at the only other bell foundry now existing in England - Whitechapel Bell Foundry in the east end of London. In this process it appears to have lost 2.5 tons. Along with most natives of this country and all tourists - I have never seen Big Ben but I am very familiar with its sound and with St. Stephen's Tower which houses it.
Posted by Peter at 22:11