A Visit to Braunston

Ask any driver you meet in UK and it is unlikely you will find many who know Braunston in Northants: ask any canal boater and it is unlikely you will find any who do not know Braunston.
It occupies the centre of a large letter X formed by the intersection of the Oxford and the Grand Union Canals. It is a great place for meeting other boaters as your paths cross. Last weekend we selected Braunston as the location for a non-canal meeting.

We drove down from Preston in Murvi and slept the night at The Boathouse pub. As it was closed for refurbishment and not due to reopen as a carvery until the Sunday we were not obliged to dine there. This was fine with us as we were lunching at the far superior establishment up the hill in the village - The Old Plough. From our experience it is not possible to get anything less than excellent food and service here.  The test I use for a first encounter with a restaurant is to order ham and eggs.  If the ham is plastic and the egg yolks the colour of primroses then you can expect freezer to microwave food. The menu at The Plough is standard pub grub but the standard they set for quality of these dishes is excellent. Before we ate we had to fill the water tank on Murvi and decided to do this at the BW water point next to Midland Chandlers on the A45. Here were two surprises for us. First we popped into the chandlery to browse and bumped into Darren who had been managing Severn Valley Boat Centre when Gecko was built. 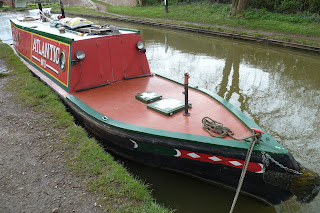 After gossiping with him for a while we returned to Murvi to get on with the job in hand only to find the Stewarts & Lloyds tug Atlantic moored there, engine running. When we called through the open door for Derek a reply came from behind us. He was following us from the chandlery.
So more gossiping ensued. 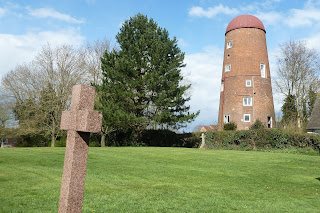 After lunch we took a brief look at the old windmill before walking down to the marina across the phytle. On our way we met the Cleggs returning from provisioning  Balador for a journey to Anderton. Judy was the compiler of The Launderette List which was published by Aylesbury Canal Society until they took Balador to France  when IWA assumed that role.

So Braunston is apparently a good place to meet people whether traveling by road or canal.
Posted by Peter at 14:15