The secrets behind that jaw-dropping Olympic opening ceremony. For many, it was the most stunning and captivating opening ceremony to any Olympic Games.
More than one billion people around the world watched Danny Boyle's astonishing and fantastical journey through British history which kicked off the London 2012 Games.
The theatrical tour de force included a series of dazzling spectacles, from a 40ft oak tree rising serenely from a grassy mound, to a towering 18metre Voldemort character roaming around the stage.
Even Her Majesty the Queen featured in the show - apparently parachuting into the Olympic stadium in Stratford , east London .
Today we can reveal  (courtesy of another Peter) some of the secrets and technical achievements - until now have been shrouded in the strictest secrecy - which it took to produce this breath-taking performance. 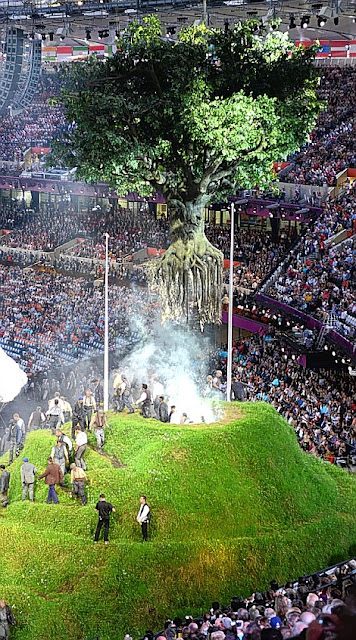 The 40ft model of an oak tree that rose above the grassy mound representing Glastonbury Tor) in the opening ceremony was made of steel and fibreglass, and was lifted by a winch. Inside the mound two spiral staircases allowed actors to emerge from the ground. Around it, 79,000sq ft of real grass and wildflowers adorned a stage set 11.5ft above the stadium floor  to allow for the technical crew beneath. In total, 161,000sq ft of staging was used over the ceremony - equivalent to  12 Olympic-sized swimming pools. 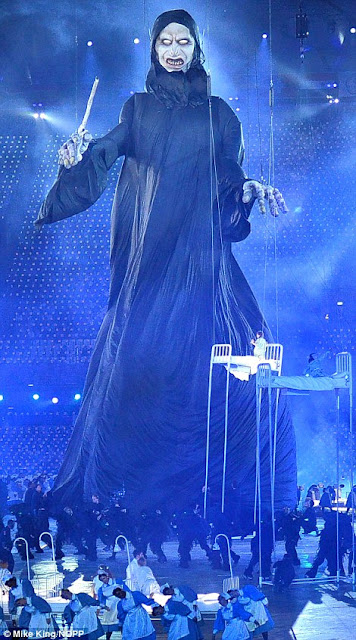 The 18 metre Voldemort was controlled by wires from the rigging, and puppeteers under the stage using rods. Set designer Mark Tildesley was in charge of the props team which made it. 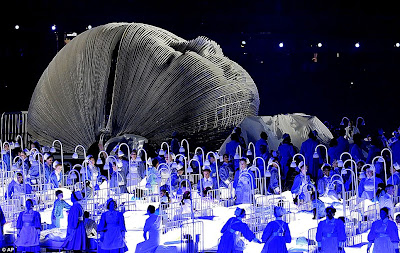 The NHS scene used 1,200 volunteers from UK hospitals, including 600 nurses. The giant baby was made from fibreglass paper. Switches lit duvets on the 320 beds. 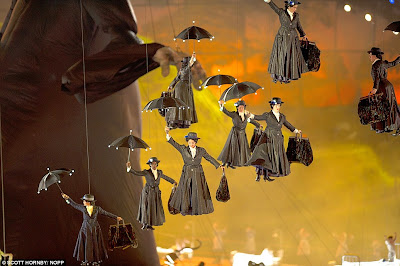 Thirty-two actresses were dressed as Mary Poppins to descend on wires attached to rigging which could support 25 tons (the weight of five elephants).
They carried umbrellas with lights attached - just some of the 2,000 props used over the night, from 737 suppliers. 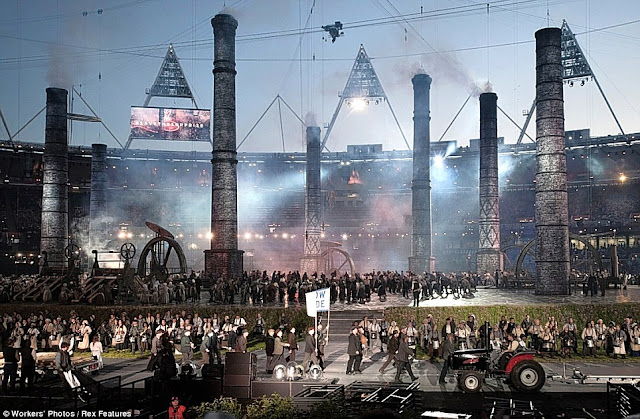 High-powered fans inflated the seven fabric chimneys, up to 100ft high, from trap doors in the stage. Crew kept them upright using winches while trapeze artists used gears and pulleys to secure them from a mesh of wires suspended over the stadium. Alongside them, five 32ft long, 9ft-wide steam engines made of steel, aluminium and wood were assembled by ten crew members to help represent the Industrial Revolution. 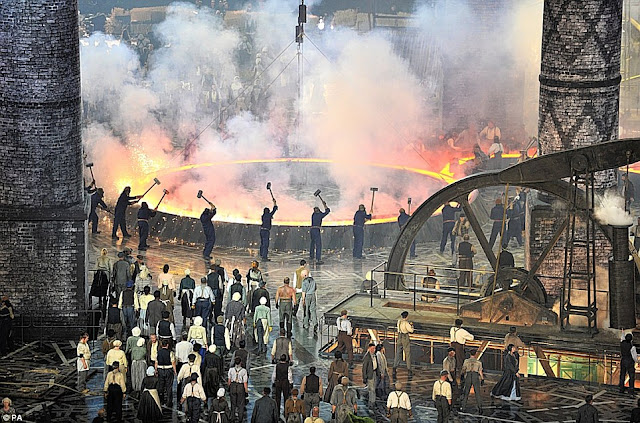 Amber lights lit in sequence created the illusion of a 100ft molten steel river, with pyrotechnic smoke and 'dry ice' as the steam. The steel 'flowed' into a 39ft diameter trough to form an aluminium ring, which was raised to join four other rings flying in on cables to form the Olympic symbol 328ft above the stadium. The 30-second shower of sparks was real, with actors and crew protected with fireproof costumes. It was masterminded by Brighton's Howard Eton Lighting, which has designed special effects for West End shows.

Despite rumours that David Beckham wasn't actually driving the speedboat - named Max Power - that sped him down the Thames, organisers insist he was operating the controls, with other crew members on hand just for safety (though they admit he didn't dock the boat himself). Apart from close-up shots of Becks, the entire trip was filmed live, overseen by Billy Elliot director Stephen Daldry. 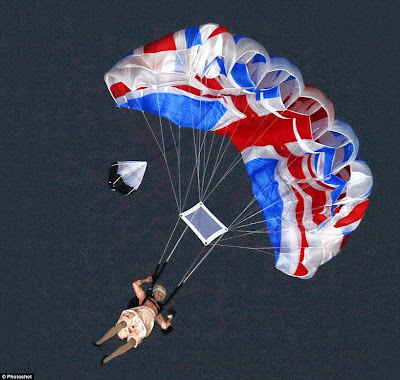 Stuntman Gary Connery dressed as the Queen to leap from a helicopter 550ft above the stadium. Mark Sutton, a former soldier, jumped as 007. They had taken off from Stapleford Airfield in Essex and hovered over London for 30 minutes before the jump - then landed outside the stadium, next to Anish Kapoor's steel tower. 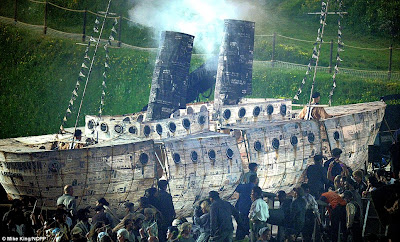 The Windrush, representing the ship that brought the first West Indian immigrants to Britain in 1948, was assembled by hidden crew carrying four parts made of steel rods covered by fabric made to look like newspapers from the time. Wires decorated with bunting kept the ship upright, while actors on stilts played its passengers. 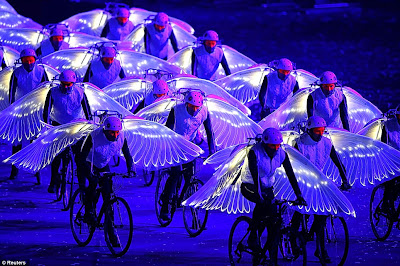 The 75 'dove bikes', 70 ridden by volunteers found on internet cycling forums, rehearsed in secrecy. The fabric wings had tiny LED lights and were operated by aluminium rods attached to the handlebars which riders pressed to create the flapping effect. Bob Haro, who created the flying bike scene in ET, choreographed the sequence. The spectacular pyrotechnics finale was devised by Kimbolton Fireworks, founded by Cambridgeshire vicar and former chemistry teacher, the Reverend Ron Lancaster. The firm, now managed by his son-in-law, also devise the fireworks for the Mayor of London's annual New Year display. The pyrotechnics were transported to the stadium by canal barges. (Yippee!)
Posted by Peter at 23:27