Nuneaton & Brighton
It must be June because we are experiencing April showers and back in April we had the June sunshine.  I am not sure whether the climate is warming up but it is certainly muddling up. Yesterday evening we took a little walk up the Leicester Arm as we are moored by Norton Junction where it joins (or leaves) the Grand Union main line. It was a glorious evening, and, after two torrential showers during the day, a welcome break. 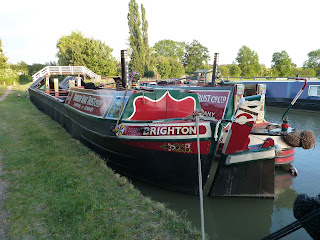 Moored just inside the Arm were the ex-working boats Nuneaton and Brighton which we saw at the Rickmansworh Canal Festival last month. They will be on their way to the Stoke Bruerne Gala this weekend and then Braunston Working Boat Festival the following weekend.


Nuneaton is a Large Northwich style all steel motor narrowboat. Built in 1936 by Yarwood & Sons in Northwich: whilst Brighton is an unpowered butty  built the year before by Harland and Wolfe in Woolwich and hence is a Large Woolwich. Originally they were not paired together but had different partners.   they were built for the Grand Union Canal Carrying Company and were part of 86 pairs of that company's Town Class fleet. they were designed to carry 72 tons of cargo between them with a draught of 4'3" and travelling at 6mph.  the canals, however, were never able to accommodate such heavy and fast boats and the typical load was more like 50 tons. In fact the greatest load ever carried was 63tons of grain and was accomplished by Brighton with motor boat Buckden.
Freight carrying stopped for all intents and purposes on the English canals in 1970 and these boats were sold.  After various  roles in private hands they were acquired by The Narrow Boat Trust and now spend most of the summer attending canal festivals and are supported by Trust members and a couple of trips each year selling coal along the canal.
Posted by Peter at 21:02