Flag Day
In 2006 on Gecko's first stop at Braunston we met up with Yorkshire Tyke and despite seeing them several times that year our only other sighting was in Fenny Stratford in 2008.. So we were delighted to exchange 20 secs of chat as our paths crossed today near Cosgrove. On previous occasions they were travelling with another boat from Strawberry Island - Hakuna Matata- but they were alone today and we did not have time to ask any more questions. The other surprise was to find that Hazel, the mooring warden at Cosgrove, was sacked at the end of the winter season to save money.  The moorings are now being treated as 48days instead of 48 hours. by the usual miscreants This demonstrates the stupidity and ignorance of BW who are currently 'coonsulting' on changing mooring regulations in the south-east to combat boats over-staying.  What they seem unable to appreciate is that if the regulations are not enforced the only people to suffer are the honest, law-abiding  ones.  The culprits will ignore the regulators whatever they are. 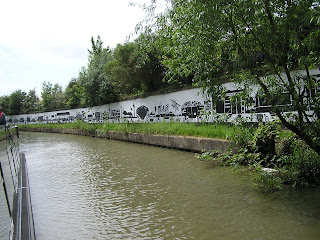 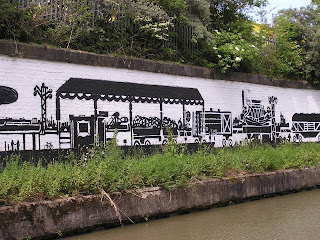 The railway mural commemorating the local industry and activities has recently been repainted by the Milton Keynes IWA and very smart it is looking too.


The original artist died a couple of years ago, I believe, but his son was involved in getting the re painting done 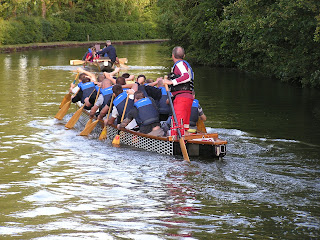 For the last couple of miles this afternoon we were being chased by the restored working boat and butty Nutfield and Raymond on their way from the WAT festival in Boxmoor to the next one in Stoke Bruerne..  We were too busy mooring up to take a picture of them so here is some other local colour.
(A note for Mike W - the leading boat is called Rio Drace) 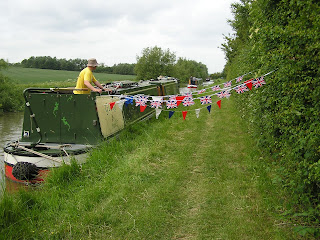 We have finished with festival for this year and so the flags and bunting were all washed before packing them away. We managed to unseat four cyclists and strangle one dog walker whilst drying them.
Posted by Peter at 21:10