Abbey or Not Abbey
Last Sunday Radio 4 broadcast the Northern Broadside Theatre's production of Othello with Lenny Henry in the title roll. We missed it as friends from Watford, Graham & Joyce, who have a cottage in Earby took us out for a drive (yes, in a car, not a boat). Sometime between lunch and tea we arrived at Jervaulx Abbey near Blubberhouses.
This is a charming and interesting 12th century abbey which is in private hands and well worth a visit if you are venturing into Yorkshire. It was built originally by the Cistercian order which was formed when the Benedictines started to go soft. It owes its level of preservation as much to the current owners and the 19th century Earl of Ailesbury as to the vegetation which has provided erosion resistance. Compare with Fountains Abbey where keen weeding has resulted in the disappearance of much of the stonemason's fine work. 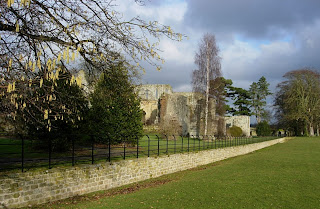 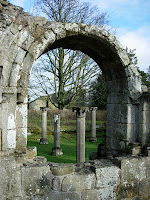 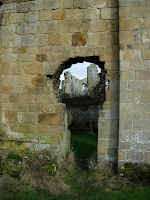 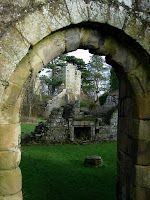 Looking through to the Infirmary

Stone on which Monks were embalmed before burial.

En route to Jervaulx we stopped to take a brief look at Thrusscross Reservoir which was frozen but still pouring through the dam. 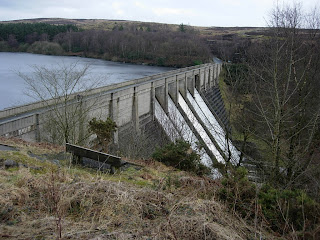 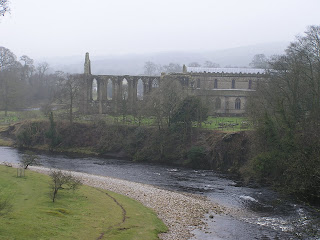 Visiting Jervaulx reminded me of Bolton Abbey which is also in private hands and which many claim was only a Priory. Situated on the banks of the River Wharfe it is set in extensive and attractive grounds. A fine place for an afternoon's walk.
Seen here on a misty day in January
Posted by Peter at 18:31