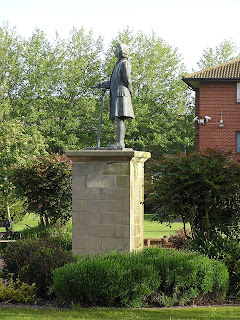 Bank Holiday Monday and we are at Etruria in Stoke-on-Trent. Just in time for the museum. Except it opens Wed-Sun afternoons only! Regardless of demand!
Never mind, we have moored opposite a statue of James Brindley, the father of British canals. He was the engineer for the Staffs & Worcs, Trent & Mersey amongst others which he hoped would eventually create a Silver Cross of canals linking the four corners of the country. When we were here in the 1970's there was no statue but the Wedgewood pottery factory and one had to be wary of the trimarans flying up and down the Caldon Canal laden with pottery. They must have had outboard motors as they moved very fast without creating a noticeable wash. Back then we wsaw no other pleasure boats on this very pretty canal. This evening six hire boats have come passed us dashing back to their hire bases after a weekend break. 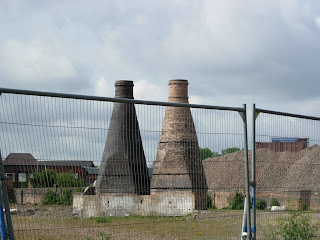 Things have certainly changed over the past 30 years. Now the only bottle kilns we pass are redundant but look lost divorced from their original surroundings. 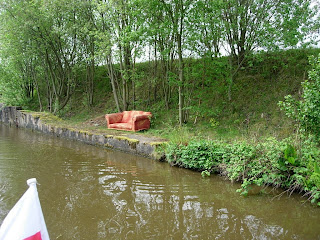 Are all aspects of our life becoming just spectator activities?
Posted by Peter at 21:18