All steamed up
The Caldon Canal no longer goes to Uttoxeter (which you can blame on the railway which arrived 35 years after the canal). The North Staffs Railway no longer goes to Uttoxeter (that was Dr. Beeching in 1963) And I have never been to Uttoxeter.
However, I have travelled along the canal as far as Froghall where lock No 1 of the Uttoxeter extension has been beautifully restored. It is a shame that 90% of the boats which travel this canal do not pass through the 76yd tunnel to reach this point. This is not due to any aversion to Uttoxeter, you understand, the tunnel profile is just not compatible with the modern interpretation of the narrowboat. Whilst I wish all the best to the Caldon & Uttoxeter Canal Trust and their plan to restore the missing link, I feel the canal will remain rather quiet as far as craft go.
The original canal was built to bring limestone down from Cauldon Low. As befits a location so named, it is 200ft above the canal terminus. It is also three miles away as the crow flies. Although 200 ft climb in three miles was not beyond the skill of the canal engineers they had the good sense to build a tramway for this part of the journey. In fact there were four incarnations of the tramway as it was changed to accommodate the rapid expansion in demand for lime. The first three versions all used horse power but the final one used cablesand steam power. As a matter of interest the third one was built by John Rennie, the engineer responsible for the Kennet & Avon Canal. 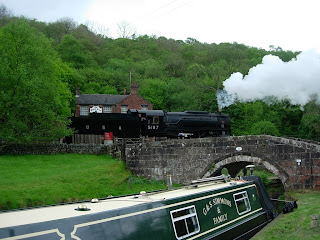 Yesterday we stopped at Cheddleton by an old mill where they used to grind up flint for the pottery industry. There is a small museum but we moved on before it had chance to spoil our record by opening. The canal follows the River Churnet throughout its route and for a mile or so shares the same bed. Also squeezed into this valley is the old North Staffs Railway, now called the Churnet Valley Railway and operating at weekends with steam and diesel locos. We spent Saturday evening and all day Sunday watching through the rain as these trains chugged past our window (and the river rose)
PS. Whey, when the canal serves Cauldon Low, is it named Caldon without the U?
Posted by Peter at 19:37