I heard on the news last night that the house in Brook St, London where Jimi Hendrix lived is to be made into a museum. This seems a good time to re-publish my blog post from five years ago........
14 September 2010
Handel & Hendrix
Apart from their alphabetical proximity in the dictionary of music, George Fredrick Handel and 'Jimi' Hendrix were close in another way: They both lived for a time in Brook Street, London. 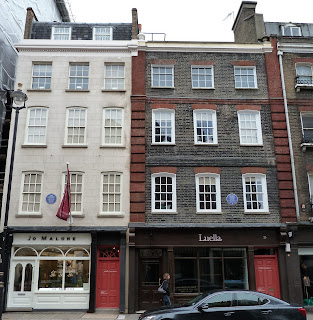 When Jimi moved into the top floor flat of 23 Brook Street in 1967 there was a blue plaque on the front of the building commemorating the previous tenant - G. F. Handel. Whether this had any bearing on his seeing Handel's ghost I could only speculate. However, Handel actually lived next door at 25: The plate has now been moved and Jimi has his own plate. Two weeks ago I had a hospital appointment in London and took the opportunity to visit the Hendrix in Britain exhibition at the Handel House Museum, which celebrates the 40th anniversary of Jimi's death.
The museum receptionist enquired whether I had come for the Hendrix exhibition or the Handel museum which I considered a little presumptuous on her part. I may have been in a minority having both sung The Messiah in St. Paul's Cathedral for Radio 2 and also seen

Jimi Hendrix perform at the California Ballroom, Dunstable. However enjoyment of the two styles of music are not mutually exclusive. Amongst the things I learned at the exhibition was where I was on the evening of 28 October 1967?! I well remembered the night but not the date.
Posted by Peter at 14:53