Turn Left for London
Before tackling the 49 locks between Padding ton and the Tring summit from the relative comfort of the 27-mile lock-free pound we had three calls to make. At Alperton we pulled in by Sainsbury's. Whilst she who must be obeyed stayed aboard Gecko I ventured into the wilds of Alperton alone. This is an expedition I have made before: it involves the purchase of many exotic provisions for our travels. For this is the location of Loon Fung the Chinese supermarket/wholesaler. M always complains about these expeditions as they are undertaken without the protection of an approved shopping list. But she does not complain when participating in the consumption of said provisions.
Next stop is an overnight stay at Bull's Bridge (or Tesco, Hayes as it is now known) where the Paddington Arm joins the main line of the Grand Union canal. The GU is the result of about eight canals merging in 1929. The largest of these was the Grand Junction which linked Birmingham to the Thames at Brentford. Prior to this canal being opened in 1805 freight from Birmingham travelled via the Fazeley, Coventry and Oxford canals before embarking on 100miles of the Thames. The Grand Junction route to Brentford was 60 mikes shorter and less windy. There was another difference - the locks from Braunston to Brentford were 14ft wide in contrast to 7ft on those other canals. This attempt by Grand Junction Company to establish a standard 14ft gauge would facilitate barges carrying 70 tons of cargo. The 14ft gauge was not adopted as the cost of widening all the narrow locks was beyond the resources of those canal companies. Hence the practice of two 7ft craft - boat and butty - became the norm on the Grand Junction. The junction at Bull's Bridge developed as a major maintenance yard for canal craft. This aerial photo shows the area in the 1950s. (The main line runs L-R; the Paddington Arm runs from bottom to top) Directly opposite the entrance to the Paddington Arm was a dry dock. 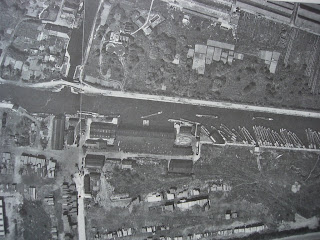 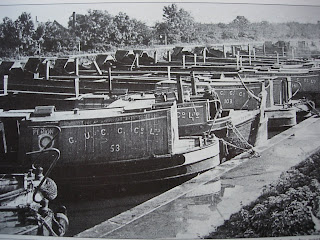 All the yard area is now occupied by a large Tesco store. The only evidence of its previous life is the preserved dry dock squeezed under the access road for lorries delivering to the store. 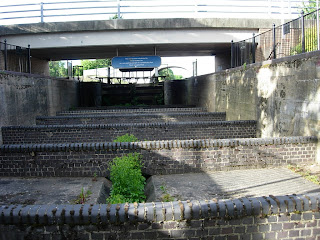 Our third task is to collect diesel and other chandlery at Uxbridge Boats (remembering that they close on Mondays)
Posted by Peter at 21:02