How to make toast
Two months ago we left our winter moorings in Stourport-on-Severn and today we arrived in Shardlow, south of Derby. These two towns apparently share the distinction of being the only inland ports in England developed primarily for the canal trade. Whilst there had been trade on the Rivers Severn and Trent for many years before the canals arrived no transshipment ports existed prior to James Brindley cutting his 'stinking ditches' - not his words. His vision was of a 'silver cross' of canals linking the four corners on England - NW, NE,SW,SE. Sadly he did not live to see it fulfilled. Brindley might still recognise many of the buildings in Shardlow however - salt warehouses and the like - despite many of them now being used for residential purposes. Stourport has a further distinction in the canal history stakes - it did not exist before the Staffs & Worcs cansl arrived - and so claims to be our first canal town. 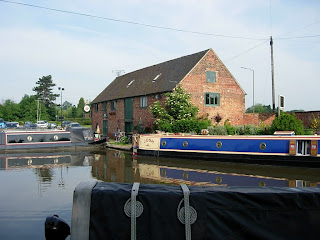 On Monday we have to get the engine serviced at Dobsons yard but this afternoon we visited the Heritage Centre. For 50 pence we spent a happy couple of hours browsing the fascinating pictures and documents relating to the history of Shardlow and environs. This is well worth the visit but only opens on Saturday and Sunday afternoons between Easter and October as it relies exclusively on volunteers. A little money from the national lottery wouldn't come amiss.