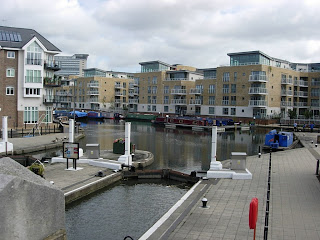 We arrived here yesterday in torrential rain which is appropriate as most of the boats here are waiting for the Thames to deposit the flood waters from Oxfordshire in order to permit access via the Gauging Lock.


Walking around yesterday evening after the rain we viewed Kew Gardens on the opposite bank of the river and Margaret expressed a wish to visit it today. In an uncharacteristic bout of generosity I gave her a shilling for her entrance and some lunch. (What do you mean entrance is no longer one penny?)

With Margaret gone for the day I decided t0 try my luck with the local birds. 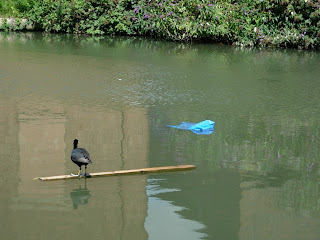 This Coot gave me the cold shoulder as she floated past me on her narrow boat. 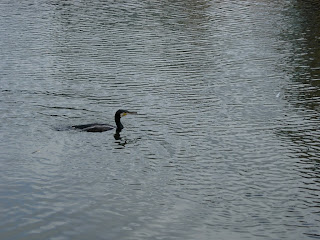 Whilst the Cormorant was playing hard to get
Posted by Peter at 21:27 No comments:

All Smoke and Mirrors
A few months ago, Ali and Elaine decided to move their boat Ellie Mae from its berth in Stourport to a marina near Napton. Imagine our surprise this morning, when Ali knocked on our door around breakfast time. He was working in the area and being a true canalaholic could not pass Bull's Bridge without having a look - and lo! there we were.
This site used to house a BW maintenance yard with dry dock and engineering facilities. It has now been recycled (=demolished) for a giant Tesco store. The dry dock remains as a reminder to any customer who can find it behind the shop. On the site also there is an amazing recycling point. It houses a conveyor into which you put your items one at a time. It then sorts them and, presumably, deposits them into the appropriate bin. I hope this is powered by solar energy otherwise its contribution to global warming will be no better than the ludicrous Carbon Trading programme. Who honestly believes that paying someone in Africa to plant a tree every time we fly to New York is going to do more that assuage the guilt of the passengers?
As with most of our politicians' output, it's all smoke and mirrors.
Posted by Peter at 18:24 No comments:

Slough of Despond?
As we were contemplating exploring the Slough Arm it started raining and blowing a gale so we decided to continue to Bull's Bridge where the Paddington Arm leaves the main line. Through this horizontal precipitation we spied a plastic launch in difficulties. On hailing the unfortunate sailors we were informed that their engine had stopped working so we towed them round to their marina mooring.
The almost dead straight five mile arm from Cowley Peachey to Slough was one of the last canals to be built in England . In 1882 the railways were making an impact on transport economics throughout the land. However it did survive for a while, taking bricks into London for the building boom and bringing back domestic waste. This was not, I believe, the reason many locals refer to Slough as The Dump. This is more likely to have originated after WW1 when many of the military vehicles were brought to what is now the Trading Estate for disposal.
The town has been immortalised by John Betjeman (in the 1930s) and, more recently, by Rickey Gervaise. Which will be the more enduring depiction we will have to wait to see.
May I remind you of John Betjeman's contribution?

It isn't fit for humans now,

There isn't grass to graze a cow

Come, bombs, and blow to smithereens

Mess up the mess they call a town --

A house for ninety-seven down

And once a week for half-a-crown

And get that man with double chin

Who washes his repulsive skin

And smash his desk of polished oak

And smash his hands so used to stroke

And stop his boring dirty joke

And make him yell.

But spare the bald young clerks who add

The profits of the stinking cad;

It's not their fault that they are mad,

It's not their fault they do not know

The birdsong from the radio,

It's not their fault they often go

And talk of sports and makes of cars

And daren't look up and see the stars

In labour-saving homes, with care

Their wives frizz out peroxide hair

And dry it in synthetic air

And paint their nails.

To get it ready for the plough.

The cabbages are coming now; 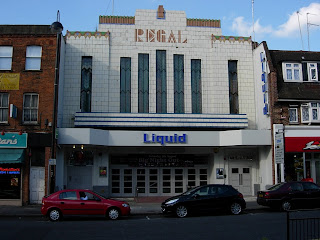 This came into my mind after walking up Uxbridge High Street and finding the charming Regal Cinema building. No longer a cinema, it has been replaced by a multi-screen box discretely tucked away behind the earlier buildings of the High St.
Uxbridge seems to have come up in the world since our last visit. There are few empty or run-down shops and now boasts two new shopping centres. The architecture is eclectic with a wide variety of modern buildings. 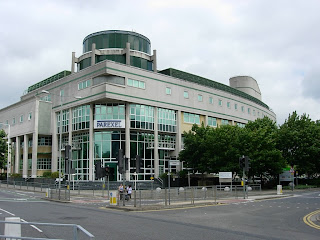 By the canal an office block has been built to resemble an ocean liner from some angels. The reason for this is not altogether clear. Perhaps its first tenants were in shipping.It is currently occupied by Parexel, the company responsible for the dreadful tests which went wrong at Northwick Park Hospital a few months ago.
Posted by Peter at 22:29 No comments:

Water, water everywhere...
With a lack of imagination and disregard for context, Fleet Street hacks flooded the front pages with these words this week. If they had read Coleridge's Rime of the Ancient Mariner they would have appreciated how inappropriate their 'quote' was:
Water, water everywhere nor any drop to drink
Water, water everywhere and all the boards did shrink.
This reflected the absence of rain - not quite the problem in Glos at present.
Back in June we left the flood-prone River Soar a day before the rains closed it. Since when we have been lucky enough to be unaffected by the navigation restrictions which now seem to apply everywhere except the Grand Union south of Milton Keynes. Every day we are getting messages from fellow boaters who are unable to move. Some have been stuck for six weeks. In Rickmansworth we are surrounded by rivers and lakes but the local water management seems to have been very effective. We are moored opposite Tesco which occupies the site of Walkers boatyard where traditional narrowboats were built for years.
Posted by Peter at 14:27 No comments:

4000 Bikes in Apsley, Hertfordshire
When Margaret and I first met I was working in Two Waters for a crash repair 'shop, just opposite the confluence of the Rivers Bulborne and Gade. In those days John Dickinson Ltd was still producing Croxley Script, Basildon Bond and other paper products in the numerous mills along the valley. When the afternoon shift changed the roads around Apsley and Hemel Hempstead resembled Beijing with the workforce all cycling home pell-mell. I used to walk along the canal occasionally to Rose's wharf where drums of lime juice were delivered by canal boat from London. This stretch of the Grand Union has changed considerably since that time. Rose's Wharf is now B&Q the paper mills have all gone apart form Croxley and the Ovaltine farm and factory is now blocks of flats. Such is progress.
Posted by Peter at 21:17 No comments:

What a Banker!
After retracing our tracks through the mosquito-infested water of the Aylesbury Arm we rejoined the Grand Union main line at Marssworth. Here we resumed our journey south to our next diary date - Lynsey & Dan's wedding in Rickmansorth on July 14.
Fortunately for the trek through these broad locks as far as Berkhamsted we paired up with a Wyvern Cruiser from Leighton Buzzard. which appeared to have a limitless supply of young and active crew. As we chatted in the locks it transpired that there were three such boats travelling in convoy, the crew being RBS bank staff on a team-building exercise. After observing one particular member who obviously saw her contribution to the team as solely decorative I asked the organiser if there was any evidence that these events were any more effective than the Xmas party. This elicited an irate but naive response that "they (RBS) wouldn't pay if it wasn't effective."
Once these bankers had stopped for their lunch we continued our descent from the Tring summit alone and on to Boxmoor to re-acquaint ourselves with the herd of Belted Galloway's grazing there and with Weston's wet fish shop for the best fish and chips in the area.
Posted by Peter at 20:56 No comments:

Oh the Ignominy!
Whilst Gecko languished in Aylesbury basis for two and a half weeks partaking of the local electricity, we sneaked off to see the Ballinger Players production of Educating Rita. This was by way of a bonus as they usually restrict themselves to two productions per year - March and November. We lived locally for almost twenty years and during that time missed very few of these productions. This is dining theatre with a difference. Patrons take their own food and crockery and eat throughout the performance if they so wish. Once again we (8) were treated to Sue A's heavenly quiche accompanied by salads and followed by dessert and coffee. The choice of show was very brave and the performance justified the effort.
The following week we assembled a different team of six to participate in a quiz night at Little Missenden village hall organised by Kate A to raise funds for Breast Cancer support. Our valiant effort resulted in us sharing last place. It will be a long while before we shake off the stigma of sharing last place. From other viewpoints such as fund raising and catering the evening was a great success.
Posted by Peter at 20:36 No comments: