Year of the Fire Monkey

What more can I say?

DON'T DO THESE THINGS

Are You a Monkey?

If you were born between these dates, you are a Monkey in the Chinese Zodiac


The Lucky and Unlucky Things for "Monkeys"

The Unlucky Things That "Monkeys" Should Avoid

Everything points to disaster for Monkeys in this Monkey Year. Those who will be 12, 24, 36, etc., this zodiac year watch out! However, you can turn misfortune to fortune by seeking the blessing of lucky stars.

2016 is a Monkey year. Monkey years are believed to be an unlucky for people born in a year of the Monkey. A year of one's birth sign is believed to be the most unlucky in the 12-year cycle. “Monkeys” (who take Chinese astrology seriously) are particularly careful about their health, love lives, career, and investments in Monkey years. Read more suggestions on How to Be Lucky in the Year of Your Birth Sign. 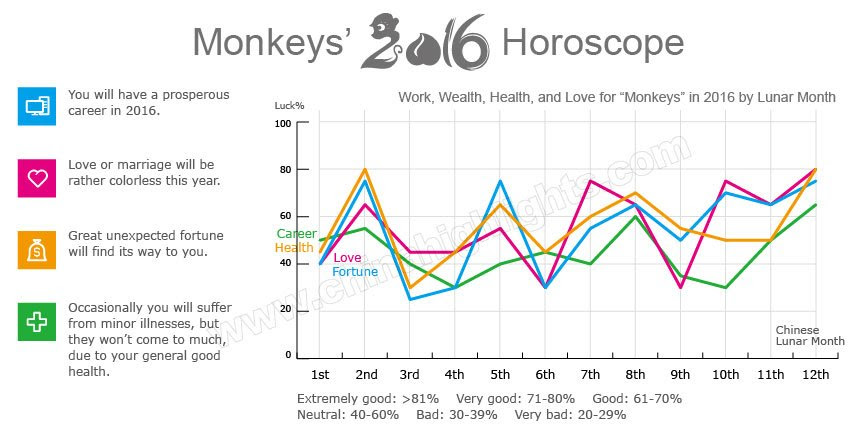 Monkeys can have prosperous careers in 2016, if correctly aligned with the Tai Sui star. They will be able to make breakthroughs, if they focus on their career and discipline themselves. If not, they will hardly achieve anything. They should guard against untrustworthy people and discipline themselves in order to avoid trouble. The luckiest months for them will be the second, fifth, and twelfth Chinese lunar months, during which they should seize opportunities instead of missing them.


A Year of Money for Monkeys?

Great unexpected fortune will find its way to Monkeys in 2016, so they will not have to worry about food and clothes. The best months for them to make their fortune will be the second and twelfth Chinese lunar months, during which they should make full use of their time to invest and cash in. They should avoid gambling, speculating, and collecting illegal or greedy gains, or they will lose everything they have, especially in the third Chinese lunar month. They should also guard against becoming poor due to greed. Monkeys should not show off their wealth, or they will be persecuted by others.

Monkeys will suffer from minor illnesses; however, they will not come to much harm if they are careful. If they take their medicine, the symptoms will lessen. They should be aware of traffic safety as they go about their daily routine, and never take risks. Great attention should also be paid to food safety to ensure illness is avoided. Their health horoscope is never above neutral, but worst in the fourth and tenth Chinese lunar months.


Monkeys may have difficulty in relationships in 2016.

Monkeys' relationships will be rather colorless in 2016. The more they long for a relationship, the harder it will be for them to get one. They may encounter a romantic relationship if it happens naturally, especially in the seventh and twelfth Chinese lunar months. They will have a happy ending if they seize the right opportunities.

People born in a year of the Monkey are witty, intelligent, and have a magnetic personality. Personality traits, like mischievousness, curiosity, and cleverness, make them very naughty. Monkeys are masters of practical jokes, because they like playing most of the time. Though they don't have any bad intentions, their pranks sometimes hurt the feelings of others. Monkeys are fast learners and crafty opportunists.
They have many interests and need partners who are capable of stimulating them. While some like the eccentric nature of Monkeys, some don't trust their sly, restless, and inquisitive nature. Although they are clever and creative, monkeys can't always exhibit their talent properly. Monkeys like to take challenges and they prefer urban life to rural.


How "Monkeys" Should Keep Healthy

Usually Monkeys are very healthy, partly due to their active lifestyles, and wanting to experience the flavors of life. If they do experience illness, it is usually of the nervous or circulatory system. People born in a year of the Monkey often spend more time at work. Therefore Monkeys need to remember to take breaks to save their energy during their busy schedules. Since Monkeys usually do more outdoor activities, they should pay attention to safety, and while traveling or driving.


The Best Jobs and Careers for Monkeys


How to Build Relationships with "Monkeys"

In relationships, Monkeys are not very quick in settling down, as they tend to be promiscuous and are easily bored. However, once Monkeys get a perfect partner, they commit to him/her in every possible way. Since Monkeys love to talk and are sociable, they can be communicated with easily.


Love Compatibility: Is She/He Compatible with You?