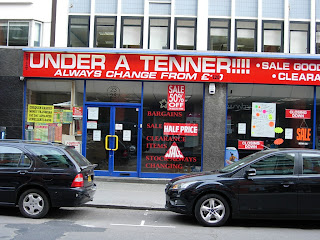 It pays to read the small print!
Posted by Peter at 23:12 No comments:

Email ThisBlogThis!Share to TwitterShare to FacebookShare to Pinterest
Srewy
Here is the corkscrew bridge which prevents boats from entering the final basin in Paddington 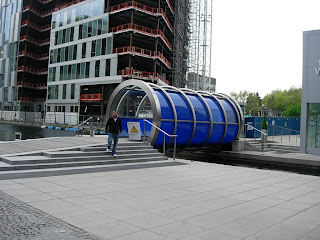 Two questions
1) Why bother with a movable bridge when there will never be a need to move it?
2) Why, in the 21st century, would anyone design and build a pedestrian bridge with a slippery surface? (see the permanent warning sign)
Posted by Peter at 23:01 No comments:

Roll up, roll up
The redevelopment of Paddington Canal Basin has been going on for some time and has not been shy of the odd dose of hype. Bringing water to the West End is one of the developer's straplines. I thought the water was already there!
The bridges are causing quite a stir, particularly the roll-up bridge designed by Thomas Heatherwick. This was opened in 2004 and spans an inlet from the canal basin underneath the new M & S headquarters. It is truly elegant and ingenious, using hydraulic rams in the handrail to roll up the bridge like a scorpion's tail but if you want to read some really poetic journalism go to the Observer site.

"Putting the fun into functional"

It is a shame that this bridge does not actually have a function. It is rolled up at noon each Friday so that it can be cleaned with a jet wash but no boats ever use the inlet and so one is left with the feeling that it is just another ego trip for the architect and developer.

There is also another bridge on the development which apparently opens by means of a corkscrew-like arrangement. I have not met anyone who has seen this happen.
Posted by Peter at 23:14 No comments:

More on Alrewas
Remember the farce at Alrewas where BW changed the moorings from 14 days to 48hours rather than enforce the existing regulations? (see If at first you don't succeed... March 7)
Well it just got more farcical!
To change the mooring terms requires planning permission which BW have not acquired so they cannot enforce the new regulations anyway!!!
Posted by Peter at 22:27 No comments:

A Free Day
Yesterday we ventured out of London (using our free bus passes of course).
A gentle walk down to the Bayswater Road and a bus to Shepherd's Bush. then the 607 to Uxbridge to buy some paint and other chandlery as there are no chandlers in London.
After lunch at the Tai Pan oriental buffet, which sits in the middle of a roundabout, we boarded the 724 to Watford to another BBC recording of Discovering Music. Whilst we were blacking the boat a few weeks ago I made a visit to this chandlery to buy further supplies of blacking and when I boarded the return bus the driver told me I could not board with paint as it was hazardous.! Compare this with our friends in France who take their plastic barrels to the supermarket and return with them full of diesel ON THE BUS.
Today, however, we have enjoyed a remarkably free day.
First stop St. Martin's in the Fields for the free lunchtime piano recital then on to Freemasons' Hall for a guided tour of the Grand Lodge building. Beautiful workmanship inside which was spoilt a little by a xenophobic guide. To finish the day we had tickets for a concert by the BBC Singers in St. Paul's Church, Knightsbridge. (not many words have six consonants together do they). This chamber choir are performing in seven of the Proms this year and the concert was by way of a taster. The twenty four members of UK's only full-time professional chamber choir sang eleven songs, all unaccompanied. My favourites were:
I love my love from six choral folk songs by Gustav Holst;
The Bluebird by Charles Stamford
Pastymes with Good Companye by Henry VIII
They are taking this Proms Preview out to the provinces which in BBC terms comprises Bristol, Brighton and Bath. I am not sure how the choice of representative towns was determined. If there was a budget cut which truncated the list at the letter B then they could have included Birmingham and Bridlington for instance. I suspect it more likely that the BBC could not afford the native guides and security team required to venture north of Watford.
After the immensely enjoyable and impressive concert we walked back to Little Venice via Hyde Park. As we passed The Serpentine the cafe was still illuminated so we decided to stop for a cup of tea. Unfortunately it was, in fact, closed so whilst she who must be obeyed made use of their facilities I chatted with a waiter. When we finally left the owner asked us to take some sandwiches from the 'fridge as he would be discarding them. So munching our free dinner we continued our walk home.
Posted by Peter at 10:35 No comments:

(and commiserations if you are not privileged to be English)

Sunset in Watford
Do you remember where you were or what you were doing on 4th February 1962?
Perhaps you were looking at the first issue of The Sunday Times Colour Section, as I was.
If you were you may remember the cover photo of Jean Shrimpton wearing clothes by Mary Quant taken by David Bailey.
Remember now?
Although this new venture lost money for over a year it established a trend few papers have been able to resist. The company which printed the first issues was Sun Printers in Watford. Printing companies seem to have been in a permanent state of merger and acquisition last century and Sun was no exception culminating in its demise at the hands of Robert Maxwell in 1982?. Sun moved from London to Watford in 1919 with a reputation for high quality photo-gravure work. (More about that later perhaps) I remember the building on Whippendell Road with a mosaic over the front door. I do not recall the curious bell tower illustrated here. 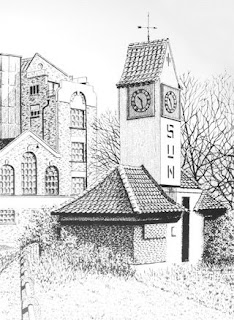 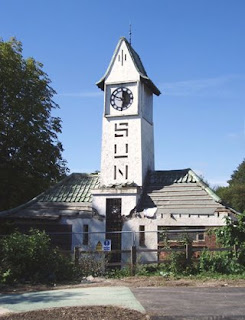 Photo 2005 after demolition of the factory

In fact this was a pump house built over an Artesian well in Ascot Road to reduce the problems of water shortage which occurred from time to time. Sun was licensed to drqw 16,000 gallons per hour which they pumped to the boiler house and thence to the photo gravure press to steam dry the ink. When the buildings were demolished in 2001 a condition of the redevelopment was that this building whould be resored and preserved. ........ 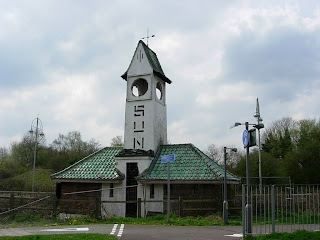 By the way - this is the best angle of view. From any other viewpoint the clutter of street furniture is even worse.
Posted by Peter at 21:56 No comments:

Email ThisBlogThis!Share to TwitterShare to FacebookShare to Pinterest
All Done!
Twenty litres of vinyl tar later we were put back into the water today. 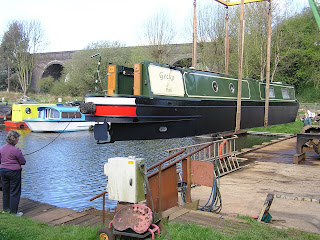 High and Dry
Gecko's need looking after. Apart from the usual care, every three years or so it is necessary to attend to their bottom. This involves scraping all sorts of crud off and then painting it with bitumen. This then keeps them happy for another few years, apparently. 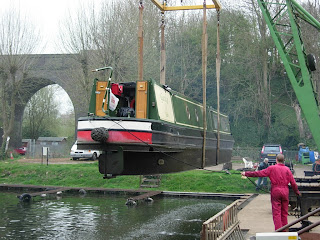 Lifting out at P & S
in Croxley Green 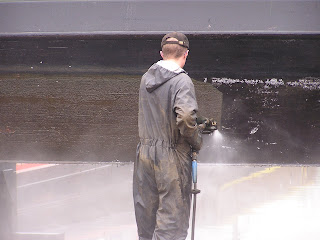 Removing the accumulated grime. This is not the jet washer you get from B&Q: test the water pressure with your finger and you'll be wondering where they flesh went.
Posted by Peter at 21:24 No comments: