Horses for Courses
I 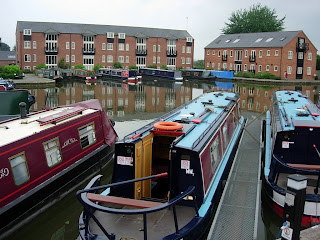 n 1950 the first campaign rally organised by the newly formed Inland Waterways Association (IWA) took place at Market Haraborough. This is now an annual event taking place over the Bank Holiday weekend at the end of August. This year it is at St. Ives in Cambridgeshire.
After visiting Fleckney yesterday we moored overnight near Foxton and came along the lock-free arm to Market Harborough this morning. I think this was originally part of an unsuccessful planned route to Northampton. Last time I came here the basin was a mess and full of toffee-coloured hire boats of the then ubiquitous Anglo-Welsh fleet. It has undergone something of a facelift in the meantime and is now full of the no less numerous CanalTime hire boats.
As we came up Taylor's Turnover Lock yesterday we were tempted to convert Gecko to horse 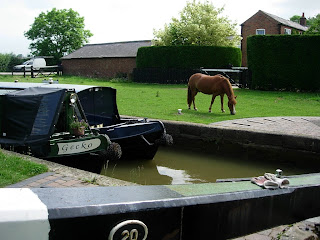 power as there was a fine looking beast grazing the lock bank. At present leisure boats like ourselves are permitted to use red diesel which attracts a lower rate of duty and consequently is around half the price of DERV. Our ever-supportive Government has now relinquished this derogation of the EU regulations and so from next year our heating, cooking and lighting costs will double overnight. If we lived on land we would still be able to buy fuel exempt from duty and attracting only 5% VATto run our central heating and hot water. But as we represent only a minute proportion of the electorate why should the British Government stand up for us like other European governments have for their boaters? President Bliar (Freudian slip?) would prefer to spend our money of a Grand Farewell Tour. This change in regulations will hit us particularly hard as we have no gas on Gecko and so rely on diesel for all our power requirements .
Posted by Peter at 14:23