This weekend is the canal festival at Weavers' Triangle in Burnley. As we were  passing through on Friday evening we noticed the Liverpool Short Boat Kennet moored on the wharf  so on Saturday morning we took the bus from Preston to Burnley. One hour 45 minutes: interesting ride but not a journey to do twice in a day. 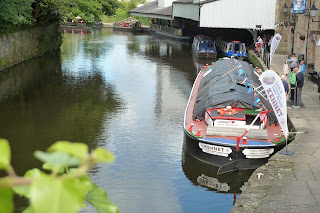 Kennet was built in 1947  to carry freight between Liverpool and the Pennines. It is 61'6" long so fits very snugly into the locks.
It was taken out of service in the 1960s and is now used as a peripatetic school room. 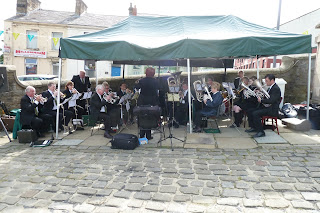 We were welcomed by a brass band which was surprising as we had not announced our intention of attending the festival. 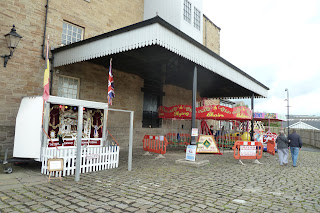 There were plenty of things for children to spend their parents' money on and some for adults too.

But support from the boating community was very disappointing.  Apart from Kennet, there were two boats from Hapton hire fleet with Lee, the owner; the Tug Anna and nb Black Sabbath.

Five years ago we spent about a week cruising with  Alan onTug Anna whilst she was being filmed for a German TV programme. This can now be viewed on YouTube   Gecko has been edited out of the final broadcast version, however.

We enjoyed catching up with all of these who we knew from our  winters in Reedley Marina but by lunchtime we were ready to return to Preston by rail.
Posted by Peter at 16:48 No comments:

What's In a Name?

A few years ago BW renamed Kegworth Deep Lock as they considered it too scary for  novice boaters. It was christened Kegworth New Lock although there is nothing new about it.
Perhaps these unhappy hirers might have taken more care  last week with their Wyvern Shipping cruiser had the name not been changed.