Do you remember the great BW scheme to attract businesses to the canal by equipping  some Dutch barges for office use and mooring them in the Paddington  Arm?  This great investment opportunity proved particularly attractive. But not to BW or C&RT as it now is. The barge Brunel, for instance,  cost £250k to buy and fit out. After a few years attracting no business interest  it was towed away to West India Dock in 2009. To navigate the canal bridges between Paddington and Docklands, Brunel had to be ballasted with 20 tons of water. It languished for a further five years in Docklands until it was auctioned in 2014.  It sold for £26k!  Of course this particular event may have missed your attention as during that time  BW was spending £21.5m on Prescott Lock on the Bow Back rivers to enable building materials for the Olympic site to be transported by canal. Only two barges passed through the lock in seven months! 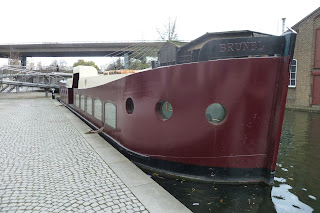 Well, Brunel is back.

When I visited Paddington just before Xmas it was moored at  Sheldon Square.

Preston in the News

We completed the purchase of our bungalow a week before Xmas and planning consent was granted the following day.  So now the hard work starts getting extension and other work under way. Whilst that is going on we will remain in the rented flat in Preston, a city we are finding very interesting. Unfortunately Preston has been in the national news too many times this week for the wrong reason.

Firstly there was the attempted bombing in Fishergate
David Rutherford, 24, of Barry Avenue, Ingol, has been charged with making an explosive with intent to endanger life or injure property. He was arrested on Tuesday morning.
It follows an incident on Thursday 17 December where a crude explosive device was found in the men's toilets of the shopping centre.   The shopping centre was evacuated and closed for the rest of the day whilst police searched for any other devices.

Secondly, there was a tragic event just down the road from us.
Liam Hewitson, 22, suffered from an epileptic fit  and died when he was attacked by his dog called Trigger.

A statement, released via Preston Police on behalf of Liam’s family, paid tribute to their son lost in what police are describing as a ‘tragic accident’.

His family said: “Liam was a happy lad who was always smiling and had lots of friends. He had a beautiful personality and he will be missed by his dad Phil, girlfriend Jess and sisters Melissa and Aleisha and brother Cordell.


Thirdly, Preston has not avoided the recent floods. To give you an idea of the impact, watch this video taken by a cyclist as he rode round the Guild Wheel, a cycle route which circumnavigates Preston. Part of the route skirts the River Ribble.
Posted by Peter at 16:37 No comments: