Foxton on the Up
Although we have been climbing steadily since leaving the Trent some nine days ago we have still not reached the summit. (That reminds me - do you remember Exquisite Form Inc changing its name to The Summit Corp 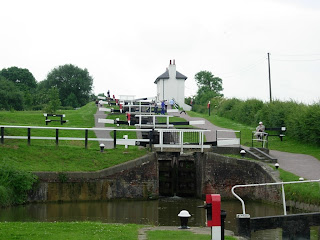 in around 1969?). At Foxton we have to climb 75' by means of two five-step staircases. Whenever illustrations of dramatic locks are required it seems that the Five Rise at Bingley, has a better publicist than Foxton where there are TWO sets with room between them for boats to pass. There is always an audience at these locks and today is no exception. It takes us just about an hour which isn't bad and we carry a little Brazilian lad up two of them. At the top there are now four boats who have been waiting a similar length of time for us to clear the locks to start their descent.
The Top Five at Foxton 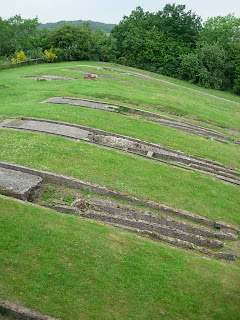 In 1900 an inclined plane was installed to try to alleviate this problem in face of increasing competition from the railways. The passage was reduced very considerably but fifteen years later the running costs forced its closure and it was dismantled and scrapped. Fortunately the canal enthusiast is a persistent animal and over the last few years the remaining traces of this structure have been uncovered and the area now has viewing platforms, a museum and a refurbished pub. The docks at the bottom have been renovated and the top pound has been dug out and re-watered. One day we may see the inclined plane back and working.


Remains of the rail tracks on which the caissons transported boats up and down the hill. The rails came from the GWR when it changed from 7' to standard guage.
Posted by Peter at 17:29