Yesterday lock 12 on the Aylesbury Arm was finally opened to traffic.  The first boat to come down was nb Gloriana. 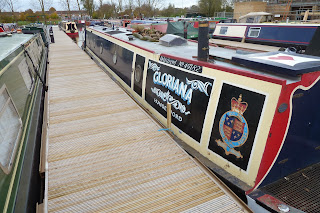 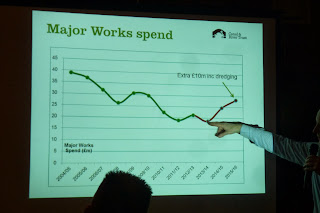 In the evening Aylesbury Canal Society held their AGM and following supper they were treated to a presentation by Jewff Whyatt, the Senior Waterways Manager for the South East. A cynic might suggest that the opening of lock 12 a few hours before this was no co-incidence. For Jeff to give up his Saturday night for C&RT was a privilege which I think all members appreciated. His message was generally upbeat but smacked a little of jam tomorrow, particularly with the planned spend on major works illustrated here. 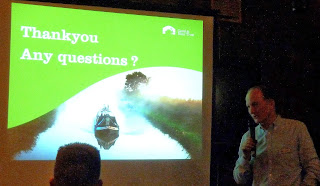 The inevitable question from the floor was - Why did an eight-week repair take eight months and cost £800,000?
At this point  I am afraid the answer was as predictable as the question and included such platitudes as we have learned a lot.   As Jeff reminded us at the start of his presentation, BW  took over management of the canals in 1962.  After  50 years they might be expected to be well into their leaning.
I was reminded of the commercial panacea that was popular when I was working: outsourcing.  This is the process where a set of activities are transferred from in-house to a contractor who claims he can do it cheaper.  The company then washes its hands of all supervision, monitoring and management with the result that it all goes sour. At this point another contractor  is brought in and the cycle is repeated. 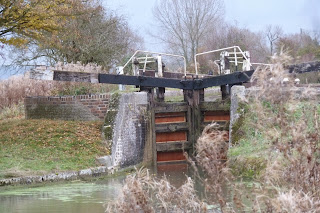 Today we took a walk up the canal to look at lock 12. Unfortunately it is still not accessible on foot as the towpath is blocked off.  However we could see what looks like a cheap ply-wood repair on the bottom gates.  I hope that we are mistaken. 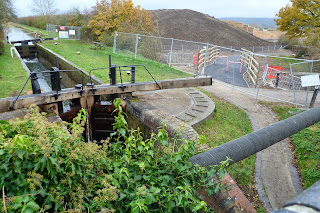 Lock 13 - Red House - has also undergone some repairs to the bottom gate. But it still took three of us to open it which for the single-hander we were helping was hardly an improvement. C&RT have taken the opportunity to install a long access path to the lock with a gently gradient. This, I assume, is for wheelchairs and/or cycles. 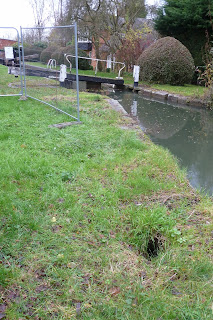 Statistics relating to canal visits vary considerably but whichever figures you use they all show that about 95%of visits are made by people who do not contribute directly to C&RT's coffers. I have queried before the spending priorities  exercised by C&RT and do not apologise for returning to the subject.
Above lock 13 there is a hole in the towpath where water is leaking out of the canal noisily. Over the eight months that the canal has been closed was it not possible to carry out some preventative maintenance here? Or  are we waiting for this to qualify for the Major Works budget?

There is a word for it

I have not verified the following bu, if correct, says something about our current state of affairs

Dream  On
A rare opportunity to buy a live-aboard narrowboat with its own mooring
in France
Dream On is eleven years old.  It has spent half its life on the English (and Welsh) canals and half in France.  It was built for our friends who have lived on it all that time.  They are now going native and buying a house in France.  Not only is this a comfortable boat which has been cared for (we have stayed on it and can vouch for that), the moorings are really amazing.  Located on the outskirts of Arras and on the site of the national watersports training centre. This is where the French Olympic team train.  If you have any experience of UK moorings then you had better sit down for this one:
950 Euros per year including water and electricity
with a discount in year 2 and 3  !!!! 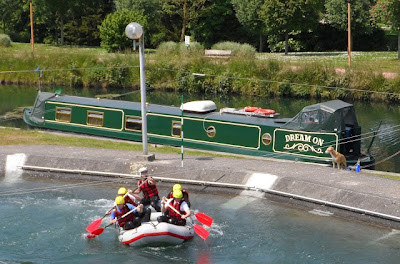 We have just learned that the buyer  of Dream On found it first on this blog.
Posted by Peter at 16:53 1 comment:

How to reduce your electricity bill

There is considerable interest in the cost of electricity and gas at the moment.
I can recommend one way of reducing your electricity bill:
Dump your DAB radio - it uses 17 times as much power as the equivalent FM one and delivers an inferior service.
To read the full story of The Digital Fallacy click here.
Posted by Peter at 12:14 No comments:

New Boss of C&RT Has Plans for The Year Ahead

After a few months looking around his domain, the new boss of C&RT, Richard Parry, made the following statement last week:

"All our many users, especially boaters, [my itallics] are vital to the Trust. I want to make sure we listen carefully to views from the cut and openly share our ideas and plans for the future so that we get input from those whose commitment to our waterways is greatest."
And he announced his plans for the year ahead.............

"We have a lot to talk about as we shape our planning for the years ahead. I want to make sure our plans align with what our customers want. There are also things we can do in the short term that will make a difference in the next year. So today I'm announcing a range of initiatives to engage with and benefit boaters and waterway users in general. Our governance arrangements already provide us with considerable input from waterway users through our Council, local Waterway Partnerships, and Advisory Groups—especially the Navigation Advisory Groups. Whilst we value these relationships I am determined to do more to open up the Trust's thinking to as wide a range of views as possible.

The British Heart Foundation publishes a booklet aimed at clarifying the safe quantity of salt we should consume.  I learnt that if a quantity of Sodium is declared on a food product then I should multiply this by 2.5 to equate it to the Salt intake. 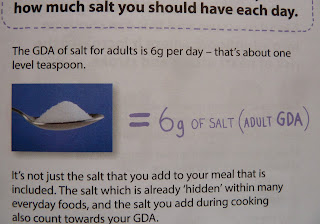 However, I did find this picture a trifle confusing.
At first glance this illustration appeared to me to be a heaped teaspoon, not a level one as described.
On closer examination I can see that the spoon is not filled to the rim and the contents may indeed equate to a level spoonful.
I wonder if every reader will take a second look.
Posted by Peter at 20:33 No comments: