Around 200 million years ago, long before Terry Wogan or even Bruce Forsyth, were fossils and  when dinosaurs roamed around outside the M25, ammonites and other creatures played Hide-and-Seek amongst the limestone and shale strata.   This was a time we now call Triassic and  Jurassic but was known then as summer holidays.

Although they did not know it at the time, some of these fossils would become more popular than either Terry or Bruce. Humans of the 20th century flocked to the Jurassic Coast in Dorset to rootle around the crumbling cliffs participating rather belatedly in their game of Hide-and-Seek.  Apart from Lyme Regis, this geological structure known as Blue Lias is also found in Somerset where it can be seen in the construction of buildings around Street, Somerton and Ilchester.  It is also a significant ingredient in Rugby cement.


Our interest in Blue Lias, however, is more related to the excellent Old Hooky they serve in the pub of that name near Stockton in  Warwickshire. 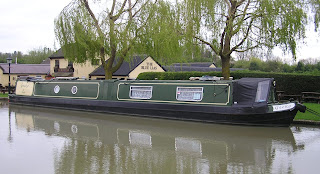 We descended the Stockton flight of locks today and moored in the garden of the Blue Lias Inn.

The food, however, was unremarkable.