High & Dry
After two months on the Leeds & Liverpool today has been rather a shock. No longer can I doze at the tiller confident that there will be no boat coming through the next bridge towards me. The shock of meeting eight boats in one day instead of over a week has made me somewhat weary. Even the day-boat which we met wanted to play chicken - particularly foolhardy when you have a 20ft puddle jumper overloaded with tipsy relations and your adversary is a 20 ton tin slug resolutely holding a steady line because its driver is dreaming of empty canals.
Yesterday we descended the Wigan flight, having arrived the previous lunchtime and thus established our position as first in line for the supervised descent. At ten a.m. there were six boats waiting to go down and two at the bottom waiting to climb the 21 broad and very leaky locks. Nicholson's guide says that it is possible to stop between locks 77 and 78. 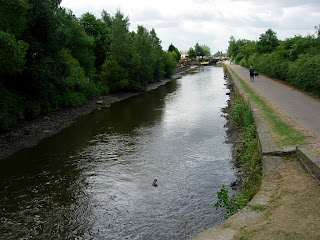 We found it impossible not to stop. The water was so low that even after the BW men had run water down from the top for 30 minutes we still ran aground leaving lock 77. Passage from lock 77-78 therefore took us one hour. Fortunately we had a good team on the windlasses - she who must be obeyed was augmented by our younger son, Douglas, who came over for the day. 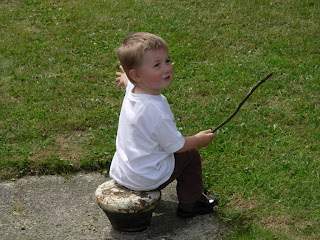 Grandson Dominic was quite sanguine about the whole affair, having discovered the true purpose of those black and white mushrooms on the lock side.
Posted by Peter at 15:08