Flash ! Bang! Wollap! ....but not in that order
On our way to our winter mooring at Reedley Marina last back end I spent a few nights moored at the bottom of Wigan flight whilst she who must be obeyed went off to do some baby sitting. Not being a regular visitor to 'the countryside of Greater Manchester' as the tourism brochures describe Wigan, I was unaware until around 7pm that I was on the main club route (I should have had some derris powder - a pun for gardeners). My attention was drawn to this situation when someone ran along the roof en route to his night of fun. I was not surprised, therefore, when I awoke at 2 am to the sound of someone on the roof again, trying to remove the assorted accoutrements of boating. As we sleep immediately below these items I banged on the roof and yelled something as I dived for the back door. The miscreant, unable to dislodge anything, made his escape across the tonneau which collapsed causing him to fall off the boat. Unfortunately he fell onto the towpath. I would have been much happier had he fallen into the cut. To avoid another Friday night experience we stayed only Thursday night in this spot this week and moved on to Worsley next day. 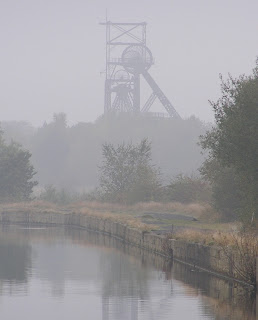 There are two locks as you leave Wigan on the Leigh Branch of the L&L and then 65 lock-free miles open up before you (if you don't count the stop lock at Preston Brook tunnel).

The countryside around here is the result of many years of coal mining subsidence causing beautiful lakes called flashes. 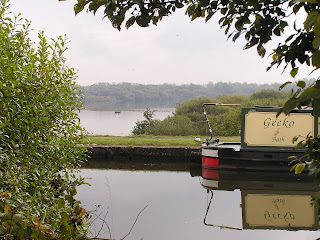 On our way up here in October we spent a night by Peninington Flash - see photo, left. 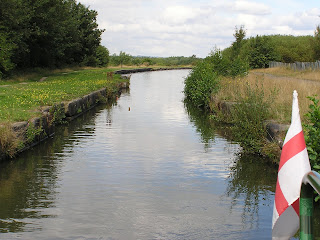 About five miles into this lock-free idyll we passed through Dover Locks!
The land subsided so much (and the canal with it) that these locks were moved five miles to Wigan. 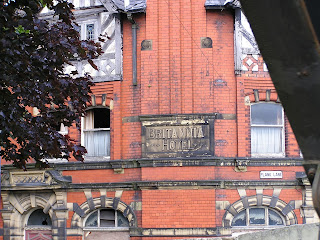 Another couple of miles and the Leigh Branch meets the end of the Bridgewater Canal at Plank Lane. A trip here to see the impressive Britannia Hotel by the lift bridge is a waste of time now as it has been demolished and the area is being prepared for 600 houses and a small marina.